Posted by Angus Cameron in School of Business Blog on May 12, 2015

Deputy Head of School, Angus Cameron, reflects upon one of the stranger tasks he has been asked to perform: being a central character in a murder mystery novel. Working as an academic often involves slipping between identities. The person at the front of the lecture theatre is not quite the same person that inhabits the […]

Did you hear the one about the Anarchist Manager?

Posted by Thomas Swann in School of Business Blog on September 24, 2014

Thomas Swann and Konstantin Stoborod, Graduate Teaching Assistants at the School, reflect on their 2 year effort to bring Anarchist Practices and Management Studies together The 3rd Anarchist Studies Network conference took place between the 3rd and the 5th of September, at that network’s home, Loughborough University. As with the 2nd ASN conference two years […] 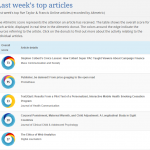 Kenneth Weir, Lecturer in Accountancy at the School, examines the popularity of a controversial article which he, David Harvie, Geoff Lightfoot and Simon Lilley, recently published (about publishing) In 2012, the four of us published a piece examining the not very well concealed relationship between the profit margins enjoyed by large commercial publishers and the […]

Academic Freedoms and the University Ltd.

Posted by Martin Parker in School of Business Blog on April 9, 2014

Voltaire once wrote “To learn who rules over you, simply find out who you are not allowed to criticize”. Professor of Organisation and Culture Martin Parker recently found out precisely what he meant. I had fundamental differences of opinion with the managers of the place I used to work. After having left “University Ltd.”, I decided to outline […]