PhD student in the School of Management at the University of Leicester working on anarchist and autonomist theories of organisation and social media.

Did you hear the one about the Anarchist Manager?

Posted by Thomas Swann in School of Business Blog on September 24, 2014

Thomas Swann and Konstantin Stoborod, Graduate Teaching Assistants at the School, reflect on their 2 year effort to bring Anarchist Practices and Management Studies together The 3rd Anarchist Studies Network conference took place between the 3rd and the 5th of September, at that network’s home, Loughborough University. As with the 2nd ASN conference two years […] 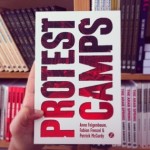