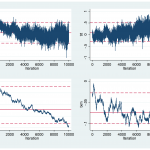 Posted by John in Bayesian Analysis with Stata on April 24, 2015

Last time, I showed how we can write R code for fitting a Bayesian Generalized Linear Mixed Model and insert it into a Stata do file, so that the computation is performed by the R program, MCMCglmm, while the results are available in Stata. The drawback of that approach is that it requires the user […] 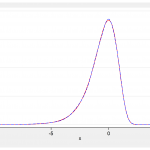 Posted by John in Bayesian Analysis with Stata on March 27, 2015

When I restarted this blog after the Christmas break I resolved to concentrate more on straightforward applications of Bayesian analysis with Stata; I believe that is what most Stata users are interested in. A couple of months in and I am going to ignore my good intensions and discuss a topic that I considered too […] 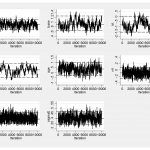 Here we go again There has been quite a long gap since my last post because over the New Year and for a large part of January I was visiting my daughter who is working in Colombia. It was my first time in South America and I was immediately struck by the beauty and the vitality […]