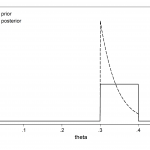 Solutions to the Exercises: Chapter 1

Posted by John in Bayesian Analysis with Stata on May 30, 2014

I usually set my students open-ended questions but I like to break down the tasks in order to help them structure their answers.  Anyway, whatever the merits of this type of questioning, that approach has certainly influenced the exercises that I have given at the end of each chapter of ‘Bayesian analysis with Stata’ and because many of those exercises are open-ended, I […] 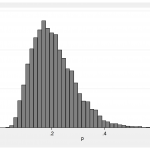 Why I don’t use WinBUGS priors

Posted by John in Bayesian Analysis with Stata on March 14, 2014

In the WinBUGS help system there are a number of worked examples that have been very influential in shaping the way that people perform Bayesian analysis. Those examples use very vague priors, such as a normal distribution with a mean of zero and standard deviation of a thousand. Many people have learned to use Bayesian […]