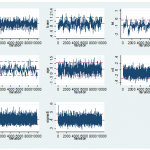 Posted by John in Bayesian Analysis with Stata on March 20, 2015

Last time I presented a basic Mata program for fitting a Poisson model with two random effects to some epilepsy data. The program was faster that its Stata equivalent but slower than WinBUGS and the mixing was quite poor. This week I will try to improve the performance of the Mata program. It would make sense […] 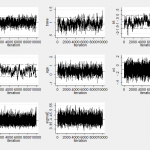 Posted by John in Bayesian Analysis with Stata on March 13, 2015

In recent postings I have analysed the epilepsy trial of Thall and Vail using Stata, WinBUGS, OpenBUGS and JAGS and after a brief diversion last week I now want to move on to analysing the data using Mata. Previously we saw that an analysis in Stata takes about 6 minutes, while the BUGS-like programs take […] 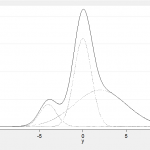 Posted by John in Bayesian Analysis with Stata on May 9, 2014

In my last posting I started a library of Mata functions for use in Bayesian and this week I will add a function that fits mixtures of normal distribution using a Bayesian Gibbs sampling algorithm. The normal distribution is the underlying assumption for many statistical models and data are often transformed to make their distribution look normal so that […]