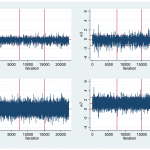 A rather long posting this week for which I apologise. I would have split this posting over two weeks but I am about to go on my summer holiday and I wanted to avoid a long gap between the two halves. I have spent the last few weeks discussing how Stan can be called from Stata and now the […] 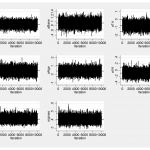 Posted by John in Bayesian Analysis with Stata on February 27, 2015

In my last posting (available here) I described Stata programs that call WinBUGS, OpenBUGS or JAGS to fit a Poisson regression model with two random effects. WinBUGS, OpenBUGS and JAGS make automatic choices about the samplers that they use and in my previous comparison I accepted the defaults offered by those programs. This week I want to look […] 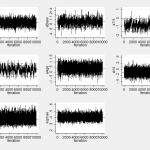 Posted by John in Bayesian Analysis with Stata on February 20, 2015

Over the last two weeks I have been looking at the analysis of the epilespy trial data taken from Thall and Vail (1990). So far I have concentrated on a Bayesian analysis of those data using Stata alone, but this model involves Poisson regression with two random effects, so it is quite complex and it takes a […]