Posted by John in Bayesian Analysis with Stata on May 9, 2014

In my last posting I started a library of Mata functions for use in Bayesian and this week I will add a function that fits mixtures of normal distribution using a Bayesian Gibbs sampling algorithm. 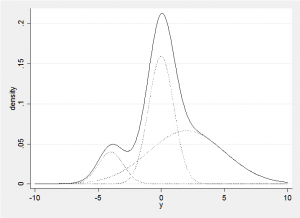 This mixture distribution is made up of a set of component normal distributions and we can generalize this approach into higher dimensions in a simple Bayesian analysis provided that we are willing to use multivariate normal priors for the means of the components, Wishart priors for the precision matrices of the components and a Dirichlet prior for the proportions from each component. Under these conditions all of the distributions will be conjugate and it is trivial to derive a Gibbs sampler for fitting the model. The algorithm starts with initial parameter estimates and an initial allocation of subjects/items to the components and then the algorithm cycles repeatedly through 4 steps:

My Mata function that implements this Gibbs sampler is called mixMNormal() and has been added to the library libbayes and instructions for downloading it are given at the end of this posting. The general method for creating libbayes was discussed in a previous posting, ‘Creating a Mata Library’.

The function, mixMNormal(), needs to able to cope with any number of components, each with its own precision matrix but unfortunately Mata does not allow arrays of matrices. My solution is to pack the matrices into one large matrix by adding them to the right. So suppose that we have bivariate data so that the precision matrices Ti are all 2×2 and let’s imagine that there are three components in the mixture, so i=1,2,3. The three precision matrices are packed into a 2×6 matrix as T=[T1,T2,T3].

To unpack the matrices we can use Mata’s powerful range indexing. In which T[|1,3\2,4|] extracts the matrix with top left element (1,3) and bottom right element (2,4). In our example with would extract T2 from T.

Finally if you look at the code for  mixMNormal() you will see that it writes the parameter estimates from each update to a comma delimited file so they can be read back into Stata using the -insheet- or –import– commands. There is no equivalent of the -post- command in Mata that would write directly to a .dta file.

An unfortunate feature of Mata is that were the program to crash (it shouldn’t but you never know), or should you stop the run before it has finished, then the comma delimited results file will be left open and any future attempt to use that file name during the current session will result in an error (the file is only closed when you close Stata). As far as I know there is no other way to close such an open file, so to continue you must select a fresh name for the csv file.

To use the Mata function from within Stata it is convenient to create a Stata program that calls mixMNormal(). You could make this very elaborate by, for instance, adding the facility for if or in, or making data checks for missing data, or checks on the sizes of matrices; however, the following code does the basic job.

This code copies the data and the matrices from Stata’s memory into Mata’s memory and then calls mixMNormal(). It is included in the download file referred to at the end of the posting for anyone who wants to try it.

Although the code works with any dimension of data we will return to one dimension for the example since this is easier to visualize. We will model the distribution of fish lengths given in a much analysed data set referred to in the book by Titterington et al Statistical analysis of finite mixture distributions Wiley 1985 and subsequently supplied in the R package bayesmix. The data set contains the lengths (presumably in inches) of 256 snappers. 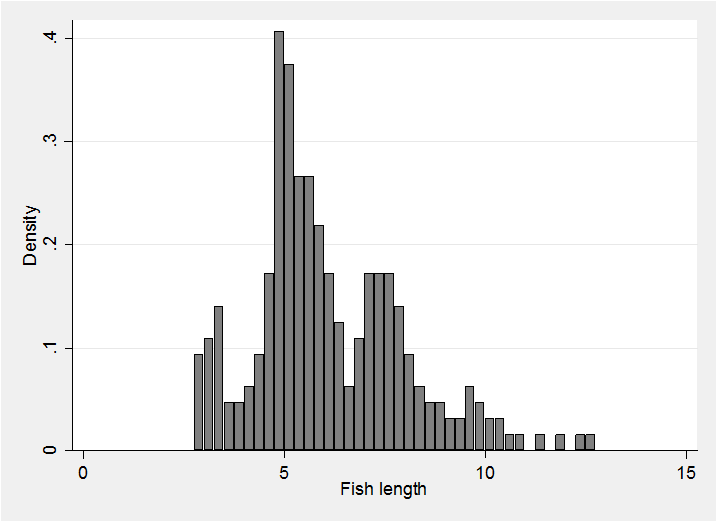 In our first analysis we will fit a mixture with 6 components and set the parameter for the Dirichlet prior to (20,20,10,5,1,1). Thus we can think of our prior knowledge as being equivalent to having a previous sample of 57 fish in which we found two common components, two rare components and two in between. Given that there are only 256 fish in the actual data, this prior will be equivalent to about 1/5 of the data.

In the absence of real knowledge about the locations of the components, we will set the priors on the means to all be Normal with mean 6 and precision=0.1. That is the prior on the component means has a standard deviation of 3.2=1/sqrt(0.1) so we expect the components to have means in the approximate range (0,12). Finally we must place a prior on the precision of each component. In one dimension a Wishart W(R,k) is equivalent to a Gamma distribution G(k/2,2/R) so it has mean precision of k/R, or put another way, a variance of R/k. If we set k=3 and R=3, then we expect the components to have a standard deviation of 1, but the distribution of the precision would be 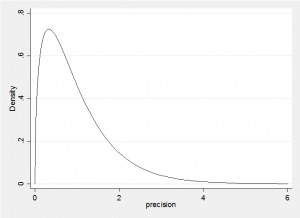 So we would not be surprised by a precision of 0.25 (st dev=2) or a precision of 4 (st dev=0.5). What this prior will do, is avoid components with very small standard deviations, so it will tend to avoid fitting a component to a single fish.

Putting this together we have

The initial values are not critical provided that we run a long enough burnin. I chose, 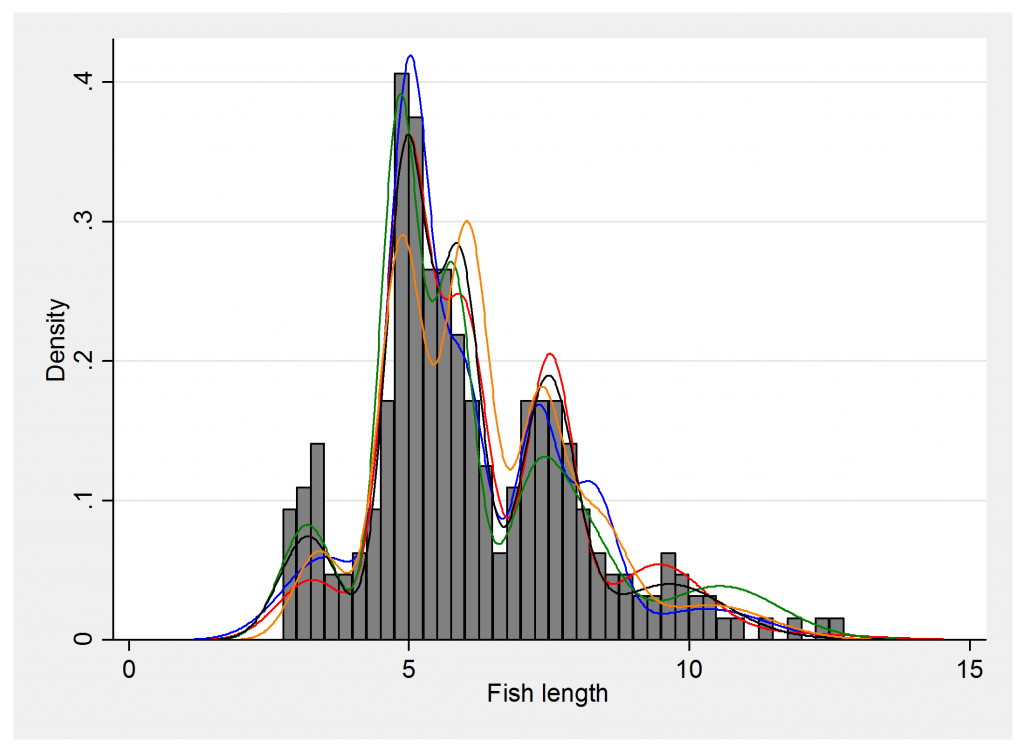 The coloured lines show the uncertainty in the model fit and are taken from 5 different points in the chain. Presumably these components correspond to fish of different ages that have grown to different sizes.

The table of mean parameter estimates is: 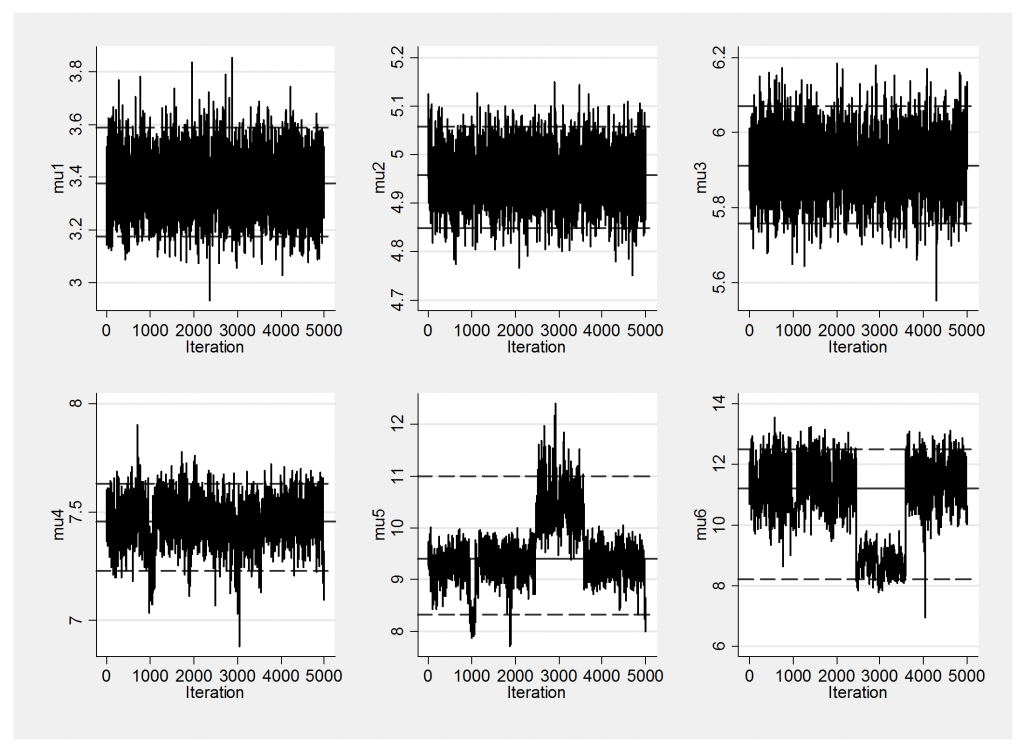 The solutions for the first 4 components are quite stable but because the last two overlap slightly the algorithm cannot decide whether to call the component with mean 9, number 5, and the component with mean 11, number 6, or to label them the other way around. In fact it jumps between the two solutions at about simulation 2500 and then jumps back again about a 1,000 simulations later. It even looks as if another brief switch took place at around iteration 1,000 that also affected component 4. Because of this label switching it is not sensible to take the average of mu5 and call it the mean of a component; mu5 actually represents different component means at different times.

I think that I will return to the problem of label switching in my next posting. Meanwhile if you would like to try this analysis for yourself, the code that I used can be downloaded from fishPrograms.

2 responses to “Mixtures of Normal Distributions”