Posted by Simon Dixon in Library Special Collections on January 6, 2017

One of our Special Collections Online that has always fascinated me is a collection of photographs of “Vanished Leicester” taken by Dennis Calow, a (now retired) architect who lived and worked in Leicester. Writing a decade ago, Dennis remembered that as an architectural student he, like most of his generation, had been ‘brainwashed into believing that everything built before the Swiss architect and theorist Le Corbusier arrived on the scene was worthless – fit only for demolition to make way for the brave new world that he heralded’. Later, in the mid-1950s, when the clearance of working-class Victorian housing resumed after wartime interruption, be became interested in the historical value of these pre-20th century buildings. He dedicated a large amount of his spare time to taking photographs of them before the demolition teams moved in, continuing until the 1970s by which time some 12,5000 houses had been demolished. 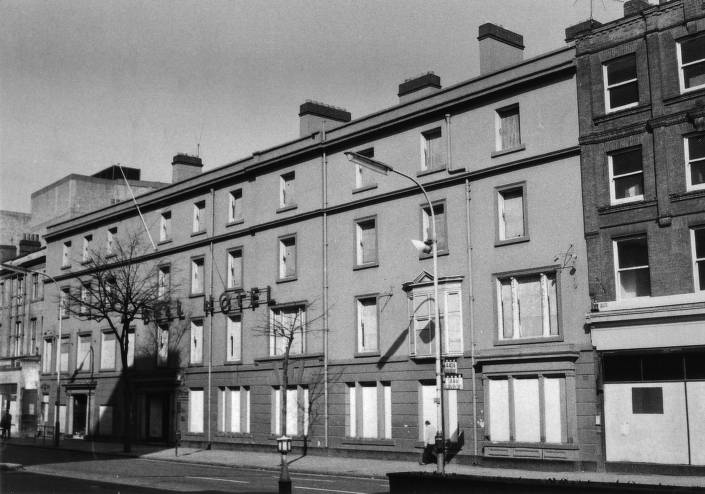 Dennis Calow, View of the “Bell Hotel” on Humberstone Gate in 1970.

During 2010-2011, the Library ran the JISC-funded My Leicestershire Digital Archive project, which involved the digitisation of a wide range of primary source material relating to the history of Leicester and Leicestershire. Among the items digitised were over 1,000 of Dennis’s photographs, and they have proved to be one of our most popular collections with around 2,000 page views per month. We’ve also received around 100 extremely interesting user-generated comments about individual photographs from people with connections to the buildings depicted. Some of the comments provide additional information about a property, for example Ernest Higgins’s note on Albert Doo’s chip shop on the corner of Hastings Road, while others have recorded that they lived at a particular address such as Marilyn Whatley on 90 King Richard’s Street. Some of the other contributions are more detailed, and display a strong personal attachment to a vanished building. For Chris Greasley, for example, photographs of his grandparent’s fishing tackle shop on New Bridge Street brought back happy memories. He writes that:

The property was very basic with no bathroom and an outside WC. There was a larder with a cold slab and a cellar where coal and coke was stored and which was used to keep the maggots as cool as possible in a large old tin bath. I was told that it was the first house in the street to have electricity installed. The only heating was the coal fire in the single living room. Despite the poor nature of the property I spent many happy hours there in my formative years and was encouraged to negotiate purchases of second hand fishing tackle from when I was around 13 years old. 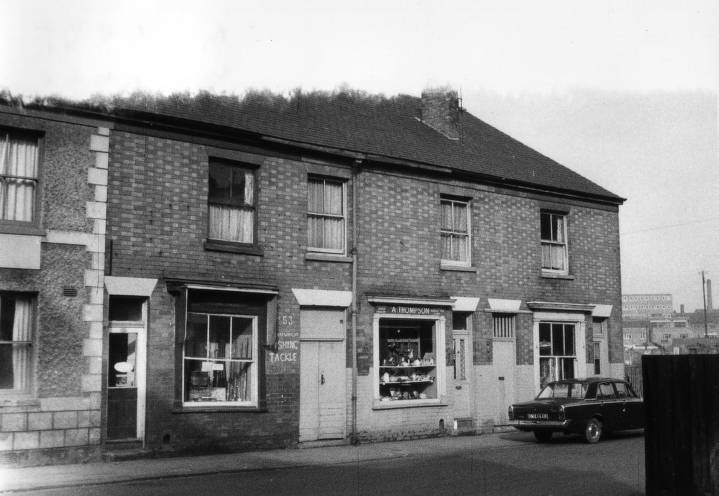 The comments on Dennis’s photographs, which were originally taken to record the vanishing architectural heritage of 19th century Leicester, demonstrate how they can help to stir memories of what Shelly Hornstein has described as the ‘architecture of the heart’ (Losing Site: Architecture, Memory and Place, 2011, p. 3). They also highlight the strong interest online in historic photographs, which have come to play a major role in the way in which people share and record their memories online, for example through the website Historypin, where we also have a presence. This is also reflected in the number of popular local ‘nostalgia’ pages on Facebook which regularly post historic images, the most popular of which has over 30,000 likes. These also allow users to record their personal memories of place through lively discussions about the images posted.

In order to make the Vanished Leicester collection easier to navigate, we have recently made use of the Library’s subscription to Historic Digimap to identify longitude and latitude for as many of the addresses as possible. We are indebted to Rhianna Watson, our current intern, for completing the majority of this work. The first stage of the process was to log into Digimap’s Ancient Roam service, and search for addresses on the 1950s ordnance survey maps. These usually give street numbers, enabling an accurate location to be identified represented as a northing and easting. Once these coordinates were obtained, the British Geological Survey’s Coordinate Converter was used to convert them to longitude and latitude. The resulting data was then imported into Google’s Fusion Tables, a free tool for creating simple data visualizations and interactive maps (see below). Nearly 700 of the photographs have been georeferenced so far, since it has only proved possible to locate streets that still exist without a great deal of effort. Further work is needed to identify locations where an entire street has vanished.

Seeing the points presented as a map makes it much easier to compare the ‘vanished’ Leicester that Dennis Calow photographed with the modern city. Of particular interest, for example, is the sequence of dots around the Haymarket Centre showing the buildings demolished to make way for the shopping precinct opened in 1973. It was the loss of these buildings, and the town planning policies it represented, that were lamented by Sue Townsend in her 1981 musical The Ghost of Daniel Lambert.

There are still many photographs that don’t have stories attached to them. We are always pleased to see more comments added to the Vanished Leicester collection, and are grateful to all those who have already shared their memories or got in touch with us directly. Please keep these coming, and let us know if you can help identifying any properties we don’t currently have co-ordinates for. And finally, of course, thank you to Dennis Calow for allowing us to make these photographs available. They are an important record of a vanished part of Leicester’s built enivornment.