The Lord of Misrule and his band of ‘lusty guts’

Posted by Margaret Maclean in Library Special Collections on December 20, 2016

Behaving badly at the Christmas festivities and doing something you would really rather not remember is not an exclusively modern phenomenon, as a trawl through our Special Collections reveals – although in the 16th and 17th centuries the scene of your shame, rather than being the office party, might have been one of the many bowling alleys, regarded with suspicion and disapproval by John Stow, who observes that ‘our Archers … creepe into Bowling-Alleys, and ordinarie Dicing-houses … where they have roome enough to hazard their money at unlawfull Games, and there I leave them to take their pleasures’1.  The Tudor Christmas was a special time for sports and games – shuffleboard, shove-halfpenny, skittles and bowls, for example – many of which were banned at other times of the year and came to be associated with unruly behaviour. 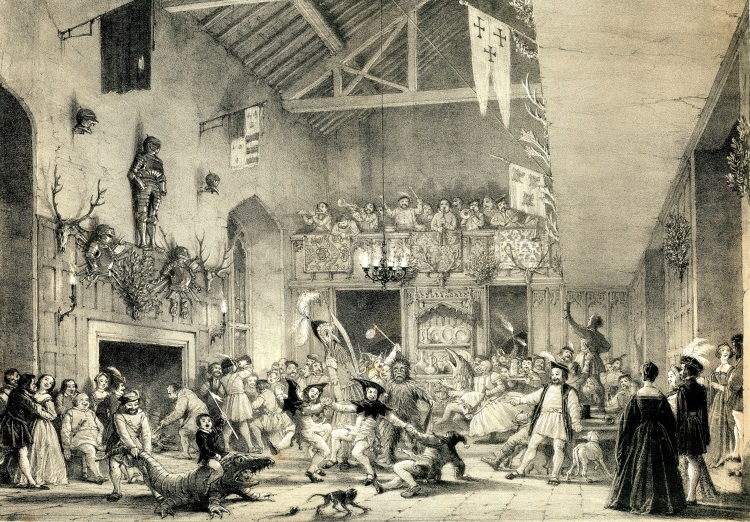 University of Leicester Special Collections. Traditional Christmas merry-making in the banqueting hall at Haddon Hall, Derbyshire from: Joseph Nash, The Mansions of England in the Olden Time, Series I, (London, 1839), SCD 00515. 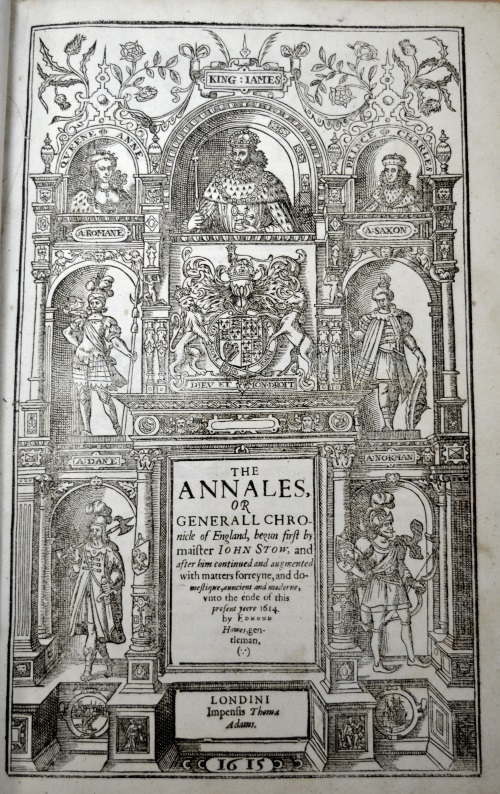 University of Leicester Special Collections. Frontispiece from: John Stow, The Annales, or a Generall Chronicle of England, (London, 1615), SCT 01578.

Presiding over these rowdy celebrations of Christmas-tide, held over the twelve days from 24 December to 5 January, was the Lord of Misrule.  Under his command, the normal order of things was turned on its head, so that fools could become kings and vice versa.  During the short reign of Edward VI, over Christmas 1551, the revels of the Lord of Misrule were especially magnificent.  The courtier George Ferrers of Lincoln’s Inn, appointed to the role of ‘lord of merry disports’, took ‘great delight in his pastimes’2.  The costumes made for him were rich and lavish in the extreme.  For his procession through London on Twelfth Day, for example, he wore ‘a robe of wrought purple furred velvet, the inside white and black, like powdered ermine, with a coat … of the same; the garment welted above with blue and yellow gold tinsel, [his] hat garnished with purple velvet, striped with threads of silver …’ and so on, and was accompanied by his revenue, all also richly dressed, enough magnificence to ‘turn any moderate man’s head’3.  Stow describes his progress by river from Greenwich to Tower wharf, from which he was conducted to the house of the Lord Mayor for a great banquet.  Afterwards, he was given a silver gilt cup, ‘a hogshead of wine and a barrel of beere … for the traine that followed him’4.

In an atmosphere where the normal rules of society were suspended, the Lord of Misrule could command anyone to do anything and drunkenness and wild behaviour were almost encouraged, inevitably things sometimes got out-of-hand. John Strype describes the ‘Riots and great Disturbances in Finsbury’ carried out by ‘a Number of loose young Men of the Inns of Chancery’ on 2 January 1582.  They were indicted, before the Bishop of London, John Aylmer:

‘For common Disturbers of the Peax, for Night-walkers, for Breakers of Glass Windows, Lanthorns, and such like, and principally for the great Riot they had committed … and one of them, named Light, was especially indicted for Singing in the Church, upon Childermas Day, Fallantida dilli &c. [an idle song then used].’

In their defence, the Earl of Leicester told the court that, if set at liberty, they ‘did intend to lead a new Life’. However, the Recorder’s verdict was that,

‘I do suppose that Light and Kniveton are descended of the Blood of Nero the Tyrant. I never knew of two such Tyrannical Youths: The Elder not being twenty Years old’5. 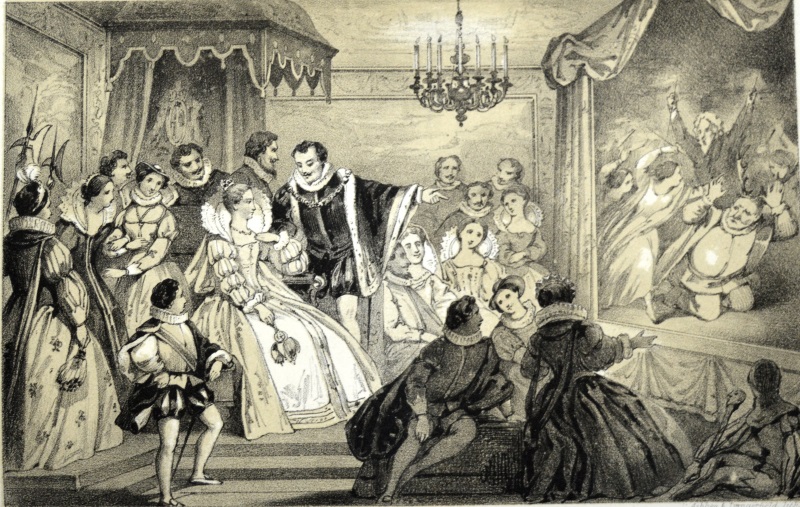 Richard Evelyn, father of the diarist John Evelyn, on appointing his retainer, Owen Flood, as Lord of Misrule, gives a detailed description of the powers granted to him:

‘… I give free leave to the said Owen Flood to command all and every person or persons whatsoever, as well servants as others to be at his command whensoever he shall sound his trumpet or music, and to do him good service, as though I were present myself, at their perils … I give full power and authority to his lordship to break up all locks, bolts, bars, doors and latches, and to fling up all doors out of hinges …’

It must be noted, however, that, in keeping with the Evelyn family’s habitual propriety and moderation, swearing, drunkenness, fighting and kissing ‘any maid, widow, or wife, except to bid welcome or farewell, without his Lordship’s consent’6 was to be punished. 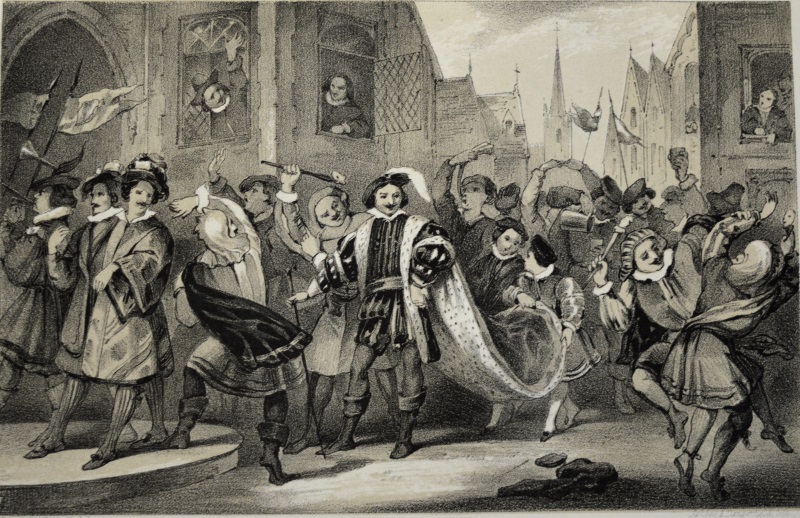 Predictably, the Puritans deeply objected to the concept of ‘misrule’, which they blamed for drunkenness, promiscuity and excess. The devout Philip Stubbs was disgusted by such self-indulgent and intemperate revelry:

‘First, all the wilde-heds of the Parish … chuse them a Graund Captain (of all mischeefe) whome they innoble with the title of ‘my Lord of Mis-rule’ … this king anointed chuseth forth [a number of] lustie Guttes, like to him self … then have they their Hobby-horses, dragons & other Antiques, together with their baudie Pipers and thundering Drummers to strike up the devils daunce withal. Then marche these heathen company towards the Church and Church-yard, their pipers pipeing, their drummers thundering, their stumps dauncing, their bels iyngling, their handkerchiefs swinging about their heds like madmen, their hobbie horses and other monsters skirmishing amongst the route’7.

During the 1640s, the Puritans worked to outlaw the customs associated with Christmas. In 1644, the Directory of Public Worship (a manual of instructions for the conduct of ministers) declared that:

‘Festival dayes, vulgarly called Holy days, having no Warrant in the word of God, are not to be continued’8. 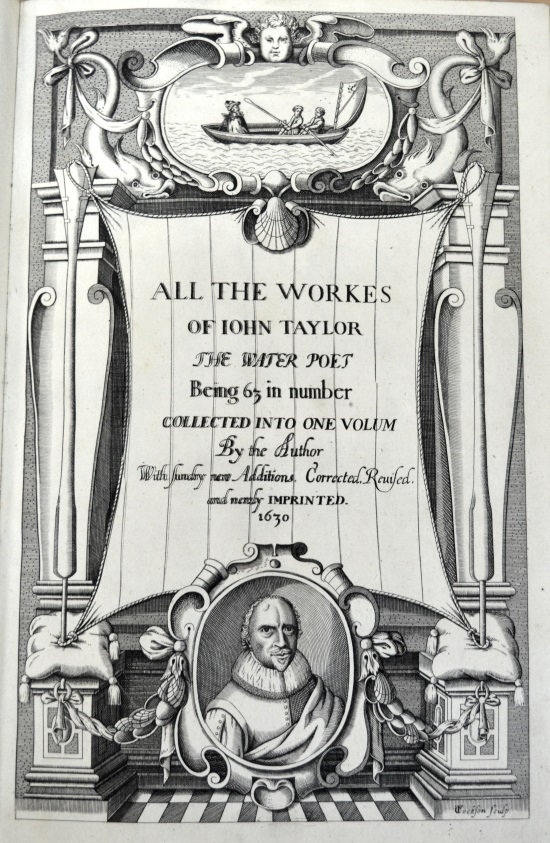 University of Leicester Special Collections. Frontispiece from: John Taylor, All the Works of John Taylor, the Water Poet, (London, 1630), SCM 06108.

The Complaint of Christmas, written by the satirical Royalist poet, John Taylor, a Thames waterman, known as ‘the water poet’, is a protest against this suppression of Christmas festivities.  It tells the story of Father Christmas’ visits to London, Yarmouth, Newbury and Gloucester, where he finds no sign of celebrations.  A large crowd complains to him that:

‘All the liberty and harmless sports, with the merry gambols, dances and friscals [by] which the toiling plowswain and labourer were wont to be recreated and their spirits and hopes revived for a whole twelve month are now extinct and put out of use in such a fashion as if they never had been. Thus are the merry lords of misrule suppressed by the mad lords of bad rule at Westminster’9.

The concept of the Lord of Misrule is an ancient one, which can be linked back to the Roman festival of Saturnalia and the medieval Feast of Fools. The Puritan ban was unsuccessful in stamping out this time-honoured custom completely and it was still observed in Victorian times, as this engraving from the Illustrated London News shows.  At the Christmas revels at the Crystal Palace in 1859, ‘Old King Christmas was seated on his throne of evergreen, while the Lord of Misrule directed the sports’. 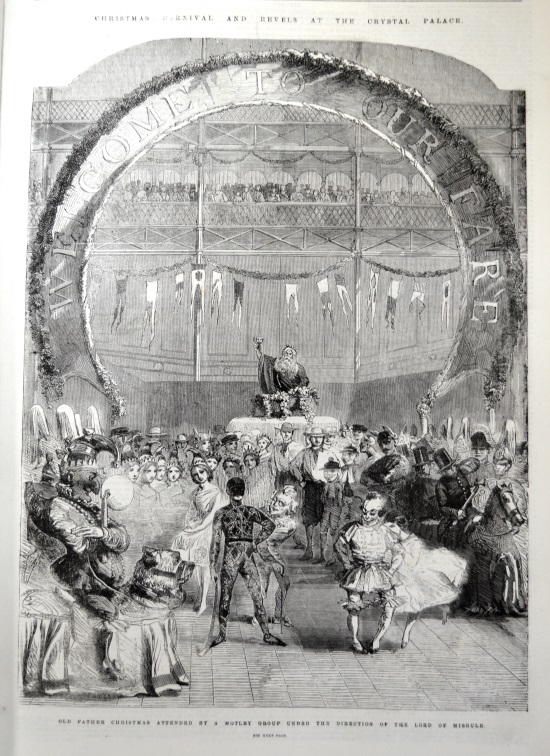 University of Leicester Special Collections. The Christmas revels at Crystal Palace in 1859 from: Illustrated London News, (London, 8 January 1859), OVERSIZE PER 050 I1195.