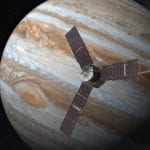 Posted by Henrik Melin in Leicester to Jupiter: The Juno Mission on August 24, 2016

The Juno spacecraft is today 3 million km from Jupiter, and it has spent its time in the first of two capture orbits about the planet. These orbits take 53 days to complete and are followed by the main science phase with orbits about 14 days long. The capture orbit itself is designed to keep […] 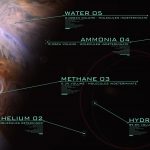 Posted by Physics & Astronomy in Leicester to Jupiter: The Juno Mission on August 3, 2016

Given that we don’t yet know whether a planetary core exists within Jupiter, much of our understanding of giant planet formation comes from a different line of investigation:  the bulk composition of the planet.   The composition of the atmosphere that we observe today results from a combination of many processes – chemistry initiated […]

Posted by Physics & Astronomy in Leicester to Jupiter: The Juno Mission on August 1, 2016

Juno has just passed a major milestone in its first wide orbit around the giant planet, having passed by its apojove, the furtherest distance to Jupiter (8.1 million km).  It will now fall back down the gravity well towards its next close encounter with the planet on August 27th.  That completes the first of two […]

Posted in Science | Leave a response