In the Musée Départemental Alexandre Franconie in Cayenne there is a room dedicated to the history of the French colonial bagne (prison). Among the displays of artwork copied from the paintings of the well-known convict artist Francis Lagrange are a handful of objects made by convict craftsmen. One is by Lagrange himself, a small and brightly decorated model of the crucifixion. The makers of the other pieces are unnamed, but they include a model of a guillotine, which doubles as a cigar cutter, and a model of an execution scene. Both are carved out of tortoiseshell. An anecdote by traveller Alfons Schwartz in 1933, noting a libéré Annamite’s efforts to regularise the trade in ‘ornaments and carved work’ leads us to think that they are the work of Indochinese convicts transported to the colony from the furthest reaches of the French Empire. There are also two coconut shells, buffed down smooth, and painted with scenes of the Iles du Salut, the islands north of Kourou that included the infamous Devil’s Island. We do not know who the convict artists of these objects were. 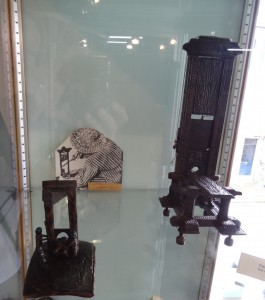 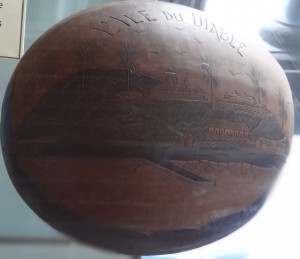 One of the exhibition spaces in the newly renovated Camp de la Transportation, in Saint-Laurent-du-Maroni, also displays a cigar-cutting model, together with two engraved coconut shells. A museum plaque tells us that convicts in Saint-Laurent also carved wood and made fancy goods from brightly coloured feathers; with bagne arts and crafts known as camelote. Such goods found an easy market amongst French administrators in the colony. They were purchased as souvenirs during relatively short postings, and returned to France as curiosities. Indeed, a descendent of Dr Léon Collin, who worked in the colony as a doctor 1906-10, wrote recently that he remembers that his grandfather kept an execution model in his front room. 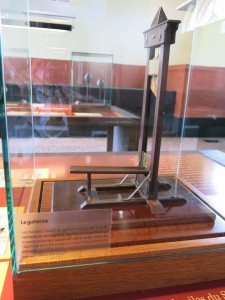 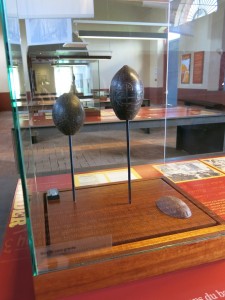 Now a French overseas department (département d’outre-mer), Guyane [pronounced Gwiyann], or French Guiana, received around 70,000 convicts during the period between the opening and closing of the penal colony, 1852-1953. This was about the same number of convicts sent to New South Wales or to the Andaman Islands. The majority of convicts came from metropolitan France, but significant numbers were also sent from the French colonies, including Indochina, but also the Antilles (Guadeloupe and Martinique) as well as Algeria, Tunisia, Morocco, Madagascar, Réunion Island and Pondicherry.

Slavery had been abolished in the French Empire in 1848; and as planters sought an alternative supply of unfree labour to a large extent convicts presented a solution to the inevitable labour crisis. Transportation was also a way of getting rid of convicts from metropolitan France and its colonies, and a deterrent punishment. Furthermore, through granting land concessions to deserving convicts after their release, it was a means of permanent colonization. On arrival, convicts were put to work in land clearance and building works, working their way through the penal classes. They gradually moved from the initial settlement on the Iles du Salut (which included Saint-Joseph and Royale, as well as Devil’s Island) to (in 1857) the mainland post of Saint-Laurent-du-Maroni, which became the capital of the penal administration of the colony. Over time, convicts built and inhabited a network of penal sites across the colony that expanded and shrank over time, according to their relative success. Convicts constructed the Camp de la Transportation in the heart of Saint-Laurent, as well as the 155-mile long road that connects the town to Cayenne. The Saint-Laurent archives and library are now located in a former convict barrack, complete with barred windows. Convict-made bricks – marked ‘A.P.’ for administration pénitentiare, and now curiosities – can occasionally be glimpsed in the town and elsewhere, incorporated into the base of a monument to the convicts, and sometimes in unlikely locations like on the veranda of my hotel in Cayenne.

As in penal colonies all over the world, French convicts were employed in diverse forms of work. In Guyane there were at various times a tannery, limekilns, and workshops for the manufacture of shoes, boots and clothes. Convicts cultivated coffee, sugar cane, betel nut, cloves and cotton, and also worked in timber extraction from the forests. There are however important points of distinction in French practices of penal transportation, particularly as compared to the British Empire. One is that notwithstanding penal categories according to length of sentence served and conduct, convicts were of various civil status, each subject to distinct treatment. Under the French law of doublage, convicts transported for less than 8 years had to serve an equivalent term as a libéré once they had completed their term. Those transported for 8 years or more were not permitted to leave the colony after serving their term; they were compelled to stay as libérés. Both categories of ex-convict were given land concessions, or employed by the French administration, and lived separately from convicts under sentence – the locations varying over the long period in which the penal colony existed. Further, after 1887, the first recidivists (relégués), or repeat offenders, were shipped to Guyane; they were kept separately from those sentenced for transportation offences. Convicts, recidivists and libérés were shifted around constantly, moving from penal category to penal category, and around carceral spaces – their mobility underpinned by their conduct, associated practices of punishment, the colony’s need for labour, and the health outcomes of particular sites.

Libérés were not supported by the French administration, and were forced to make their own living. Given that there were at any one time several thousand convicts, libérés and relégués in the colonies, as well as substantial numbers of free inhabitants and migrants, most were unable to find work. They were often reduced to abject poverty, particularly during the shortages induced by wartime interruptions to supplies in the twentieth century. In a previous blog, I wrote of the employment of convicts and ex-convicts in butterfly collecting. For those who were skilled in arts and crafts of various kinds, including the kind of carving and painting described above, the production and sale of the sort of objects that are now found in the museums of Cayenne and Saint-Laurent was another means of entering the labour market and of earning a wage.

Given their relative rarity, it is difficult to get a picture of what such objects might tell us about convict experience and identity. Certainly, models of guillotines speak to convict fears of execution, but given that capital punishments were inflicted on average once per year, they also pandered to metropolitan visions and expectations of Guyane as a ‘hell beyond seas.’ The same is perhaps the case for painted scenes of the Iles du Salut, where sick, invalid, political and non-compliant convicts were sent and made subject to a special regime. We know from convict letters now in the archives of Cayenne and Saint-Laurent that these were places of enormous hardship and suffering, but especially following the imprisonment of Captain Alfred Dreyfus on Devil’s Island, 1895-9, it was the Iles du Salut that French metropolitan visitors and voyeurs perhaps most associated with Guyane overall. Again, it is hard to separate convict perception and experience from the desires and demands of the commercial market.

Globally, the convicts of Guyane were far from exceptional in making arts and crafts. The convicts of France and its Empire shipped to New Caledonia (Nouvelle Caledonie) after 1863 were known for their intricate shell work. Many beautifully engraved shells are in private hands today, as well as in Noumea Town Museum, and exist in substantial enough numbers to enable art historians and archaeologists to piece together their history. According to Prue Ahrens and Louis Lagarde, convict-made furniture and other craft items were sold at the Nou Island bazar, but it was mother-of-pearl that was the most successful. Initially, the prison administration tried to put a stop to the trade, but eventually in 1884 they decided to authorise it, and supplied convicts with equipment and tools.

Burmese convicts in the Andaman Islands were also recognised for their carving skills. They made the coconut heads now in London’s Horniman Museum, and likely also they carved the huge and intricate teak screen now in Port Blair’s Andaman Club (there were no free Burmese migrants in the Islands at the time.) Commissioned by the local administration, it includes scenes taken from Burmese cosmology and mythology, blended with place-specific imagery, including the detail of Indigenous women seen here. If it is the product of convict labour, it is certainly a unique material trace of the penal colony, though not one that engages with subaltern experience of it in any easily discernible way. 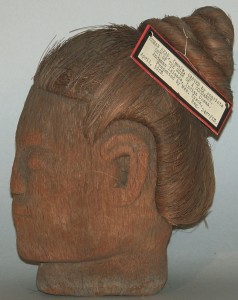 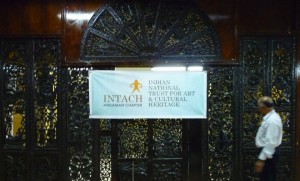 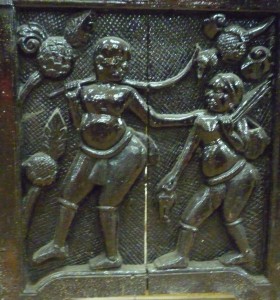 Such objects were not necessarily made for sale; convicts sometimes manufactured fancy goods and trinkets to use or keep close as keepsakes. The Bermuda National Museum includes a beautiful collection of bone carved dice, beads and pipes, used by convicts in the transportation hulks during the first half of the nineteenth century. The National Museum of Australia holds over one hundred convict love tokens dating from the same period, which were made by convicts on the long voyage from Britain and Ireland to New South Wales and Van Diemen’s Land. ‘Love tokens’ were coins rubbed smooth and then engraved with meaningful words and images, often by men and relating to mothers and wives left behind in transportation. Many Australian convicts also inked their intimate, professional and penal lives on their bodies, via pictoral and textual tattoos. And here we come back to French Guiana, where convicts – including notably Frenchmen who had served in the infantry in North Africa – covered their bodies with a diversity of pictures, including of military crests, women, flora and fauna, and the names of the people they had left behind.

Readers can view a wonderful selection of Francis Lagrange’s paintings online in the collections of the University of Missouri’s Museum of Art and Archaeology. With thanks to our fabulous project advisor Lorraine Paterson, the Alfons Schwartz quote is from Islands of the Doomed (London, 1933), p. 237. On convict shell work, see P. Ahrens and L. Lagarde, ‘Convict Art and Craft in New Caledonia,’ History Compass, 8 (2010), pp. 1243-56; and http://www.artoceanic.com/index.php?option=com_content&view=article&id=77:new-caledonia-engraved-mother-of-pearl-shells. Dr Léon Collin’s work has featured as a dossier of the month at the French Archives Nationales d’Outer Mer, in Aix-En-Provence. See also his memoire, published in Des Hommes et des Bagnes (Saint-Laurent-du-Maroni, 2015). On the Bermuda hulks objects, see http://www.bermudahulks.com and https://sydneylivingmuseums.com.au/stories/convict-hulks. Convict tattooing in Australia is explored in two wonderful pieces by James Bradley and Hamish Maxwell-Stewart: ‘“Behold the Man”: Power, Observation and the Tattooed Convict’, Australian Studies, 12, 1 (1997), pp. 71-97, and ‘Embodied explorations: investigating convict tattoos and the transportation system’, in Ian Duffield and James Bradley (eds), Representing Convicts: New Perspectives on Convict Forced Labour Migration (London, 1997), pp. 183-203.

4 responses to “Thinking About Convict Objects, in French Guiana”