A few weeks ago, it was wonderful to have our first Carceral Archipelago project panel. The three postgraduates working on the project – Carrie Crockett, Kellie Moss and Katy Roscoe – showcased their progress so far in three twenty minutes papers at the School of History’s postgraduate conference at the University of Leicester. We were pleased to welcome a large audience of staff and students. 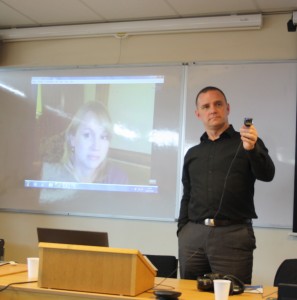 Carrie on Skype, with IT technician Dan Porter pointing the camera at the audience for questions

Carrie Crockett participated by webcam all the way from Nebraska in the U.S. She gave a fascinating paper entitled ‘Unlikely Administrators: Political Exiles on Sakhalin Island’. Carrie explored the mechanics of the administrative breakdown that resulted in the failure of the Russian penal colony, Sakhalin (1858-1906). Carrie shifted the focus away from the Sakhalin to Moscow communication problems, deconstructing instead the local power-relations that shaped the administration of Sakhalin. In an environment of disaffected official administrators, Carrie explored various other administrative tiers that wielded significant influence and agency, including–native subcontractors, physicians, and employed political exiles. She particularly emphasised the influence of political exiles, whose belief in Enlightenment ideals, led them to educate and influence the mainstream prison population. In this way Carrie suggested that isolation from Moscow exacerbated administrative breakdown on a local level, as power was yielded by administrative officials, and wielded instead by a number of unofficial administrative actors. 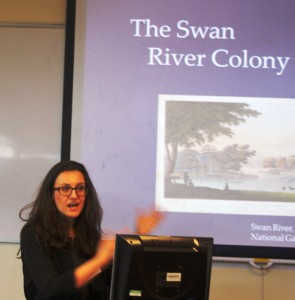 Kellie Moss, another first year PhD student, gave a paper entitled ‘Convict Connections: The transportation of convicts to Western Australia, 1850-1868’. In a similar manner to Carrie, Kellie highlighted the convicts transported to Australia’s last penal colony were influenced by official administrators in the metropole and unofficial actors petitioning from Western Australia. Kellie looked particularly at the diversity of the convicts who were sent to Western Australia, examining the high number of skilled, literate and unmarried men selected for transportation. She highlighted the way females and free settlers were sought in order to ensure the long-term success of the penal colony through re-population. Kellie then proceeded to examine the global integration of convicts transported to the colony, including those from India, Singapore and Bermuda. In 1865 192 convicts were transported from Bermuda after the closure of its penal settlement. Those from India and Singapore were usually the results of Court Martials. This led Kellie to discuss the involvement of the fenians and the unusually high number of convicted Irish soldiers transported from these regions. Kellie demonstrated the numerous and varied networks that were created through these circulations as the British attempted to expand its colonisation of Australia with convicts. 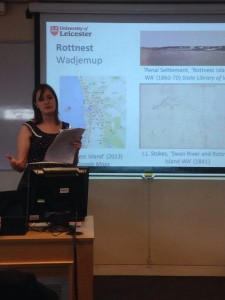 Katy Roscoe gave the concluding paper entitled ‘“Removed wholesale to some island”: convict islands and the establishment of the Australia’. She used two case studies – Rottnest Island, off the coast of Fremantle, and Cockatoo Island, in Sydney harbour – to suggest that convict islands represented a frontier of exclusion which enabled Australian colonisation in the late 1830s. She highlighted that the types of convicts incarcerated on Cockatoo – bushrangers – and on Rottnest – Indigenous – presented particular threats to the landed order of colonial Australia. Thus, their removal to geographically and symbolically distanced islands was a comfort to the public and the administration. She further argued that once incarcerated, convict labour was a means to shore up the future success of the colony. On Cockatoo convicts constructed grain siloes and a dockyard to resolve the food shortages that continued to plague New South Wales. On Rottnest, Indigenous convicts were re-trained in their understanding of land rights so that they could become useful to settlers upon release. Katy emphasised – like Carrie and Kellie – the central role convicts played in colonial expansion precisely through their transportation away from the centres of authority.