Posted by Sarah Wood in Library Special Collections on November 23, 2018

Mike Lee’s new film Peterloo has opened to good reviews this month: the screening I saw was a full house. The film tells the story of the Peterloo Massacre, a notorious event in the history of political reform in Britain. On 16 August 1819 a peaceful demonstration was held in St Peter’s Field in Manchester. Some 50-60, 000 people attended to hear Henry ‘Orator’ Hunt call for universal male suffrage and the reform of Parliament. The local magistrates read the Riot Act (meaning the crowd had to disperse) and sent the Yeomanry to arrest Hunt. As the Yeomanry moved in, they began to attack the crowd. 17 people died and a further 650 were injured. Why the meeting ended in violence and who was responsible has been debated almost from the evening of the 16 August to the present. I have created a reading list for anyone who would like to find out more, using our holdings in the David Wilson Library.

Special Collections holds two documents that tell the story of the day and its aftermath. Peterloo provoked a series of legal proceedings from both the authorities and reformers. The authorities were determined to go through with their prosecution of Hunt and the other organisers. Radical lawyers attempted several times to bring the magistrates and the Yeomanry to trial. It is from these legal proceedings that our documents were created. They also reflect the important role that radical publishers played in disseminating the arguments for reform.

Joseph Augustus Dowling, The Whole proceedings before the coroner’s inquest at Oldham &c. on the body of John Lees who died of sabre wounds at Manchester, August 16, 1819: being the fullest and only authentic information concerning the transactions of that fatal day … and a copious analytical index (London: Printed for William Hone, Ludgate Hill, 1820). SCM 01447. 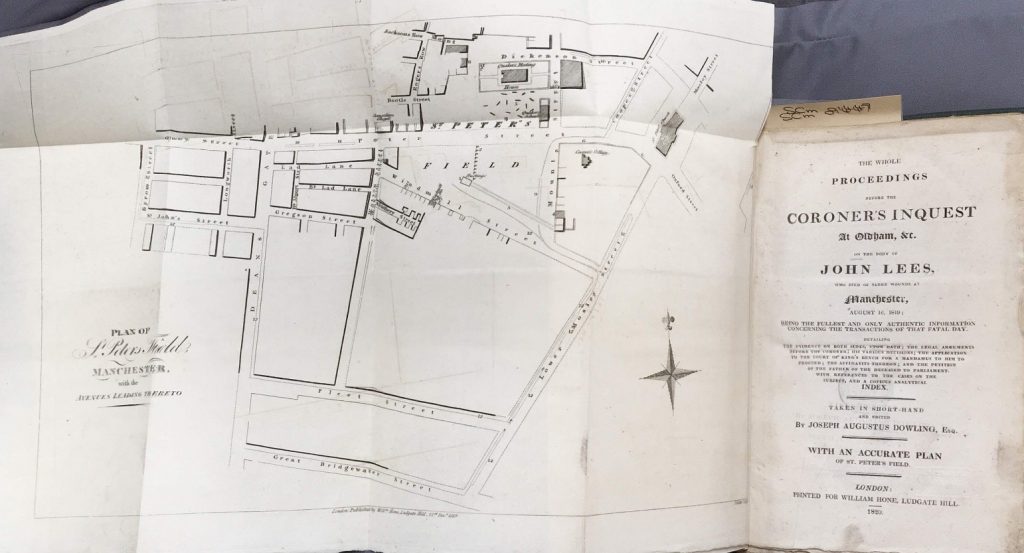 Our first document has become an important source into the day itself. The Whole proceedings reproduces the transcription of the coroner’s inquest into the death of John Lees. Lees was a cotton spinner from Oldham, who attended the meeting and suffered sabre wounds in the chaos that followed. He died in his parent’s home on the 7 September.

The inquest went on for six days and did not run smoothly. The county coroner failed to appear on the first day. The lawyer Ashworth, who represented the town of Manchester, tried to have the inquest stopped early on. On the 13 October the inquest was adjourned, and later quashed on a technicality (the coroner had not been present when the jury viewed Lees’ body). No verdict was reached.

James Harmer, one of the two lawyers acting on behalf of the Lees family, attended on the first day and brought many witnesses with him. Much of the cross examination of witnesses focused on the peaceful nature of the crowd, whether the Riot Act was heard, and the behaviour of the Yeomanry. As well as reproducing the extensive first-hand accounts, Dowling added a map showing the locations of key participants and a thorough index. 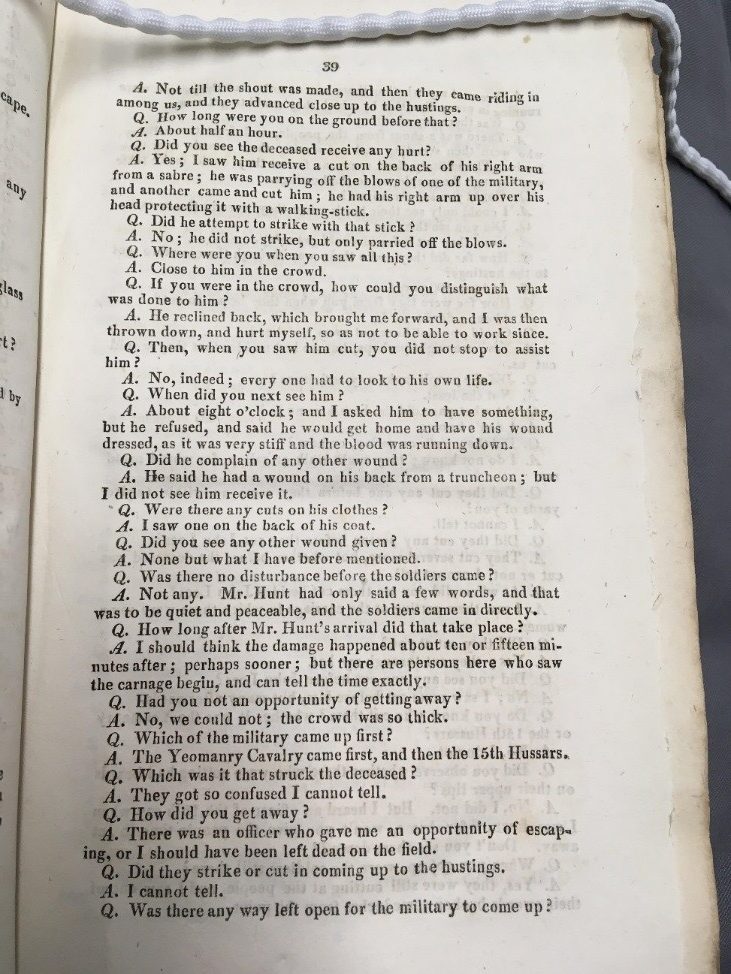 Joseph Wrigley describes how John Lees was wounded by the cavalry

The publication was intended to provide detailed evidence of what had happened to a public readership. The coroner had forbidden notes of the inquest to be published during the proceedings, and excluded two reporters on this basis. As emphasised by Mike Leigh’s film, the Press was an important part of the radical movement, and helped make Peterloo a political scandal. Several journalists were present at St Peter’s Field; John Tyas from The Times was arrested alongside Hunt. News of what had happened quickly spread via reports in the London papers, Manchester Gazette, Liverpool Mercury and Leeds Mercury.

The author Joseph Dowling was a short hand writer, who worked for James Harmer and published several books on notable court cases. Dowling states in the Preface that he did not attend the initial days of the inquest, and relied on notes taken by others to compile the early sections. The publisher was William Hone, who had a bestseller in 1819 with The Political House that Jack Built, an attack on the repression of the government. Hone had fought several legal battles over freedom of the press: the idea of publishing the proceedings after the coroner’s reporting restrictions may have been attractive to him. We hold several titles written or published by Hone including a copy of The Political House… [SCM 01551] and The Queen’s matrimonial ladder [SCM 14133], his satire on the Queen Caroline affair.

The second document relates to Henry Hunt’s imprisonment in IIchester Goal in Somerset. At his trial in York, Hunt was found guilty of sedition and sentenced to two and half years. Hunt spent much time writing his memoirs, but he also launched a new campaign for reform of the prison. A peep into a prison details insanitary conditions, immorality among male and female prisoners, and abuse of inmates by the staff. The pamphlet includes the petition of two prisoners – James Hillier and Charles Hill – complaining about their treatment, and a letter to the MP Thomas Fowell Buxton, objecting to the praise Buxton had given to the prison. Whilst Hunt failed to secure prosecutions of the Peterloo authorities, here he had more success. There were two enquiries into Ilchester and the governor William Bridle was removed from office. Like The Inquest, A peep into a prison contains a pull out illustration, here showing the use of ‘irons’ as a restraint. 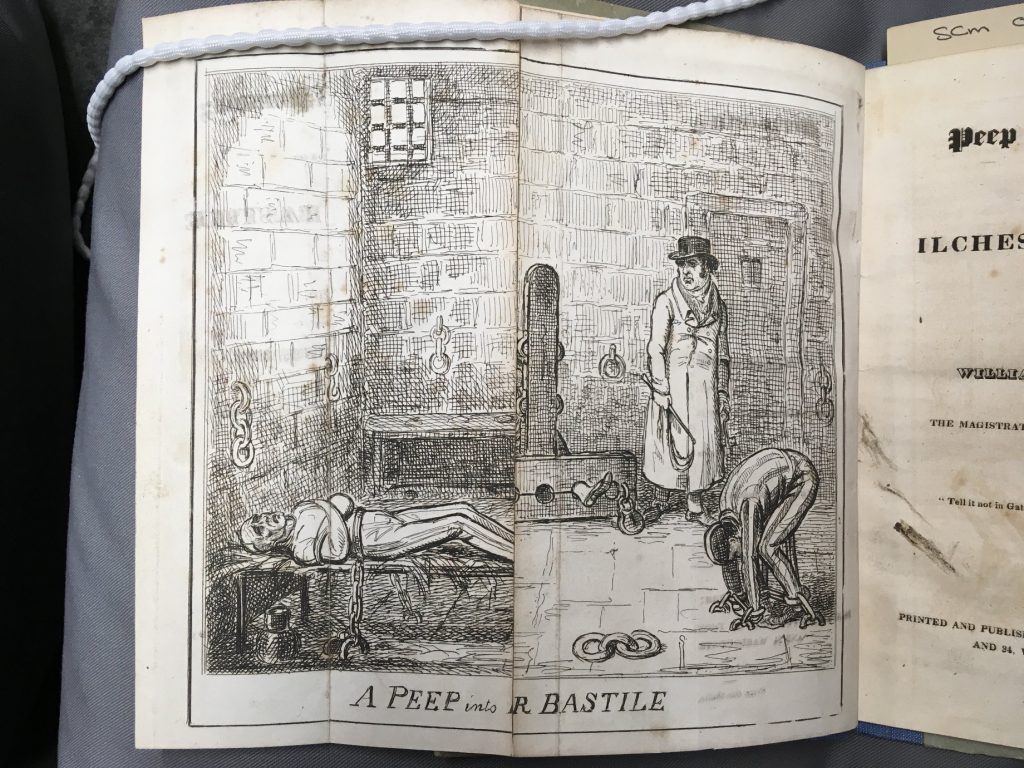 Pull-out illustration showing the use of irons to restrain prisoners.

The publisher Thomas Dolby had moved into the market for radical literature and prints around 1817, and had been involved in Hunt’s campaign to be elected MP for Westminster. We hold another two titles published by Dolby: William Cobbett’s A grammar of the English language (1819) [SCS 01729] and The rights of nations to depose their kings (1821) [SCM 06668]. Dolby was tried for seditious libel the year this work appeared.

Glasgow, Gordon Henry Harper, ‘The John Lees inquest of 1819 and the Peterloo Massacre’, Transactions of the Historic Society of Lancashire and Cheshire, 148 (1999). https://www.hslc.org.uk/wp-content/uploads/2017/05/148-5-Glasgow.pdf