Who were our first students?

Posted by Simon Dixon in Library Special Collections on October 13, 2017

There’s always an extra buzz around campus at this time of year, as we welcome all our new students to the University. With student societies out in force looking for new recruits, there are plenty of opportunities to meet new people, explore new interests, and enjoy all of the excitement that student life has to offer. It will have been very different 96 years ago, when the first intake of students started their classes at what was then known as Leicester, Leicestershire and Rutland College. The only buildings would have been the Fielding Johnson Building (originally Leicestershire Lunatic Asylum), College House, and a few temporary structures put up during World War I. The academic staff numbered just four: the Acting Principal Dr. R. F. Rattray, and three lecturers. 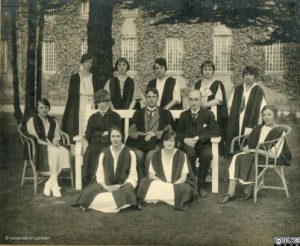 A query we receive on a regular basis is how many students were there in October 1921? It’s often stated that there were 9, and on the basis of the above photograph assumed that they were all women. Jack Simmons, in his New University (1958), gives the same number, but states that there were 8 women and 1 man. Simmons’s work was based on research in the University’s archives, and is generally very accurate. However, in this case he gives no source for the number, so I’ve recently been exploring our archives to see if any more light can be shed on the matter.

My first port of call was an index of early student record cards compiled by our recent intern, Rhianna Watson (University Archives, ULA/SR1). These provide brief details of the academic careers of students commencing their studies from 1921-1948. Among them is the card for a certain David Frederick Attenborough, who began studies in 1944, departing the following year with the note “went on to study at Cambridge”. The record cards contain details of 12 students studying here during the academic year 1921-22, 10 women and 2 men. Like the majority of students attending during the 1920s, they were mainly from local families. The cards don’t record the month of entry, so it’s likely that some of those named joined after the start of the first academic year. 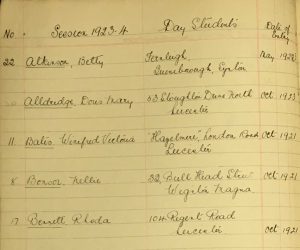 ULA/SR1/2, Register of Students from 1923 showing names, addresses, and date of admission.

A little more information can be gleaned from a manuscript register of day students covering 1921-1929 (ULA/SR2/1). This provides two sources of evidence on the first students. At the front of the volume are the names, addresses, and month of entry of students in attendance during the academic year 1923-24. Some of the dates conflict with the information in the student record cards. For example, the record card for Dorothy Gilbert gives her as in attendance from 1922, whereas the register records her date of entry as October 1921. In total, this list records 8 students (all female) as commencing their studies at the opening of the college. Some, we know, had already left by 1923, including both of the male students identified from the record cards (Geoffrey Peach, who went to Oxford, and John Butler).

A further list of students for 1921-22 can be found at the back of the manuscript register. This records the names of 13 women and 2 men who studied at the College at some point during the first academic year. Three of the students are stated as having entered during the calendar year 1922, leaving us with 12 who had begun their studies by the end of 1921. 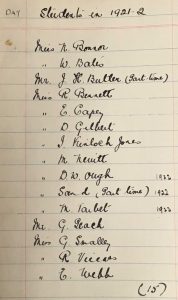 ULA/SR1/2, Register of Students from 1923, showing names of students admitted during the first academic year.

Bringing all of these sources together, it’s not clear where Simmons’s figure of 9 comes from, or whether we will ever have a definitive answer. However, it is possible to name all of the students who were part of our first ever cohort (see below table). A number of the group can be identified in the 1911 census by using Ancestry Library, giving an indication of their social backgrounds. With the exception of Marie Tarbet of Newport, they were all from local families. Some, including Winifred Bates and Rosalind Viccars were the children of members of Leicester’s industrial middle class. Geoffrey Peach was the son of Harry Hardy Peach, founder of Dryad Furniture and Dryad Metal Works. Others were the children of members of the professions. These included Rhoda Bennett, daughter of Dr. F. W. Bennett (surgeon), Edith Webb, whose father was an electrical engineer, and Isabella Kinloch Jones, a clergyman’s daughter. Miss Bennett had a lifelong association with the University, becoming ‘Assistant Librarian’ of the University College in 1931 and our first University Librarian.

A couple of the first students were from less affluent backgrounds. These included Gweneth Smalley, the daughter of a railway clerk of 110 Barclay Street, Leicester. After graduating she became a teacher, and from 1945 to 1966 was headmistress of the Warwickshire Preparatory School in Leamington Spa. In 1986 she gave £10,000 to the University Library, the largest cash gift the Library had received to that point. 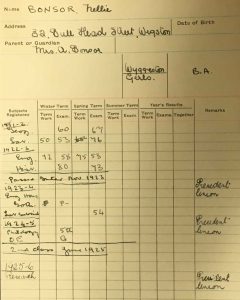 Of particular interest is Nellie Bonsor, first President of our Students’ Union from 1923-1926. In 1901 she was living with her parents and elder sister at 47 Clifford Street, Wigston in one of a row of small, newly-built, terraced houses that backed onto Eagle Works, a boot and shoe factory (identified from Historic Digimap). By 1911 her father, a foundry clerk, had died and Nellie, her mother and two sisters had moved to 32 Bull Head Street, Wigston. Nellie’s mother, Agnes, was now earning a living as a laundress. Also living in the house were Agnes’s step-sister, who was a housemaid, and her father-in-law, a carrier. Comparing historic ordnance survey maps with Google Street view it seems likely that a car cleaning business now stands on the site of the family home.

It must have been something of a leap of faith for these early students to embark on a course of study at what, initially at least, was a rather ill-equipped establishment with a small and hastily assembled teaching staff. Work to adapt the former asylum building for academic purposes was still ongoing, and it was not until the Summer of 1922 that a central-heating system and a hot-water supply were installed. The students took classes in English, Latin,  French, Geography and Botany at the College, and attended lessons in other science  subjects at the city’s Technical College. We would be delighted to hear from any descendants of the below students, or anyone else with information about their later lives. Any documents, photographs or other records from this period our history would be of particular interest.

This post draws on work carried out as part of a research commission from A Century of Stories, a Heritage Lottery Funded project exploring the individual and shared legacy of the First World War in Leicestershire, run by Leicestershire County Council.

2 responses to “Who were our first students?”