Posted by Margaret Maclean in Library Special Collections on August 1, 2017

Two hundred years ago, on 1 August 1817, the adventurer-Egyptologist Giovanni Belzoni, described by Howard Carter, with good reason, as ‘one of the most remarkable men in the entire history of archaeology’1 was the first to set foot inside the Great Temple of Abu Simbel, which had been sealed for centuries beneath the sands of the desert.  Our forthcoming exhibition, ‘Buried beneath the sands’: Unearthing Ancient Egypt, celebrates his achievement and charts the rediscovery of Ancient Egyptian monuments, temples and tombs during the 19th century, following Napoleon’s invasion of Egypt in 1798. 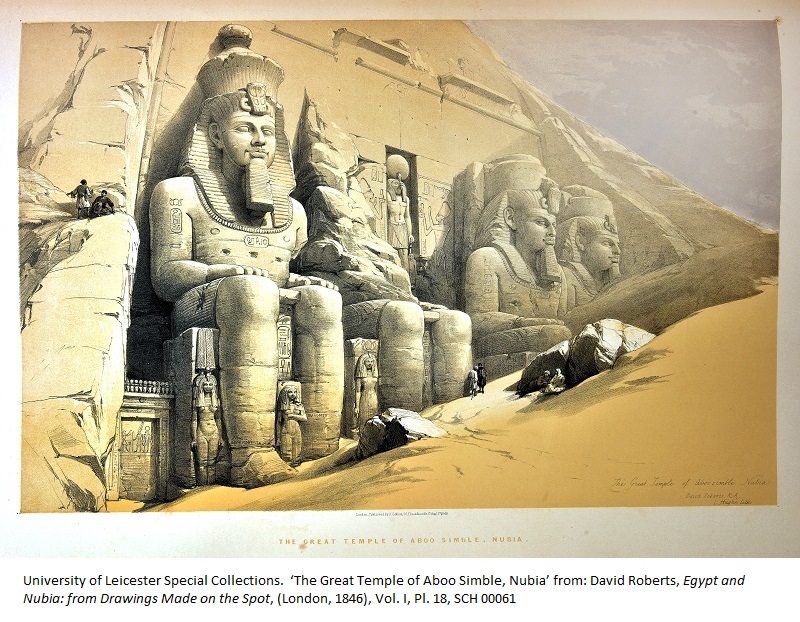 Belzoni’s exploits in Egypt have aroused strong feelings among some archaeologists – he used a battering ram to open sealed doorways in the Valley of the Kings, he carved his name (together with those of his companions) on the north wall of the temple sanctuary at Abu Simbel and he gave this account of his search in the network of caves and burial chambers behind Qurna in 1817:

‘… surrounded by bodies, by heaps of mummies in all directions … the Arabs with torches … naked and covered with dust, themselves resembling living mummies … [I] sought a resting place … but when my weight bore on the body of an Egyptian, it crushed like a band-box. I naturally had recourse to my hands … but they found no better support: so that I sunk altogether among the broken mummies, with a crash of bones, rags and wooden cases …’2 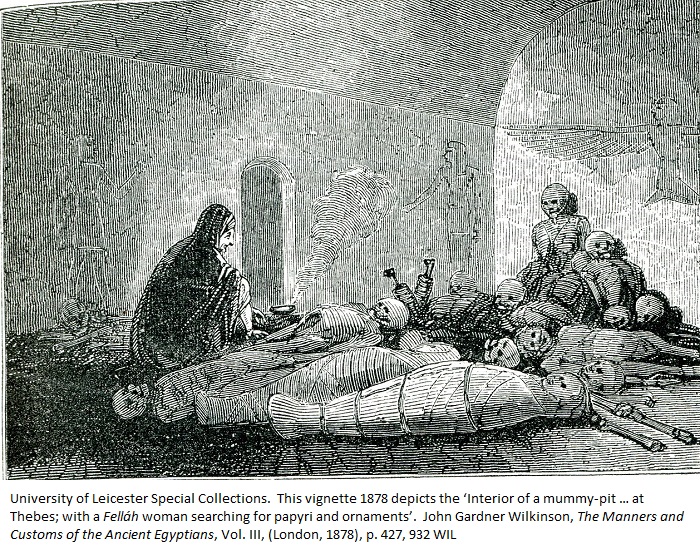 However, it was common practice for 19th century explorers in Egypt to use even gunpowder to blast their way into the monuments (Richard William Howard Vyse at Giza about 20 years later, for example) and to carve their names to show that they were the one responsible for a discovery.  The maltreatment, unwrapping and even deliberate destruction of mummies had been commonplace since the 16th and 17th centuries, when ‘mumia’ was a highly-prized drug, from the sale of which fortunes could be made.

Belzoni was the son of a barber from Padua. As a young man, he studied hydraulic engineering and at one point decided to become a monk and began to prepare himself to enter the Capuchin order, but left and took up selling religious images, rosaries and relics.  He left Italy, which was in a state of turmoil because of the French invasion, and eventually ended up in England in 1803.  Here his height of over 6 foot 6 inches and great physical strength led him to work as a strongman in the theatre, the ‘Patagonian Samson’, who carried as many as a dozen smaller men around the stage on a steel frame strapped to his waist.  This handbill from Notes and Queries of 16 July 1864 advertises his appearance at the Blue Boar Inn, Oxford on 26 February 18133.  On this occasion, Belzoni’s varied performance included conjuring tricks, a selection of airs performed on ‘Musical Glasses’, feats of strength and his interpretation of Charles Le Brun’s physiognomies – expressions of the passions of the soul.  The programme concluded with a display of optical illusions, entitled the Aggrescopius.  (Another of Belzoni’s many interests was the Magic Lantern.)

Judged by the standards of his day, rather than by comparison with modern methods, Belzoni’s achievements in Egypt were extraordinary. As well as the opening of the Great Temple at Abu Simbel, he was responsible for the discovery of the tomb of Seti I in the Valley of the Kings, major finds at the Colossi of Memnon and Karnak, the discovery of the entrance to the Pyramid of Khephren at Giza and the removal of a colossal bust of Ramses II (now in the British Museum) from the Ramesseum.  Work on transporting the bust was carried out in July and August 1816, the hottest months, and even the robust Belzoni felt the ill-effects: ‘In the evening I was very poorly: I went to rest, but my stomach refused any aliment … On the next day, I found it impossible to stand on my legs …’4 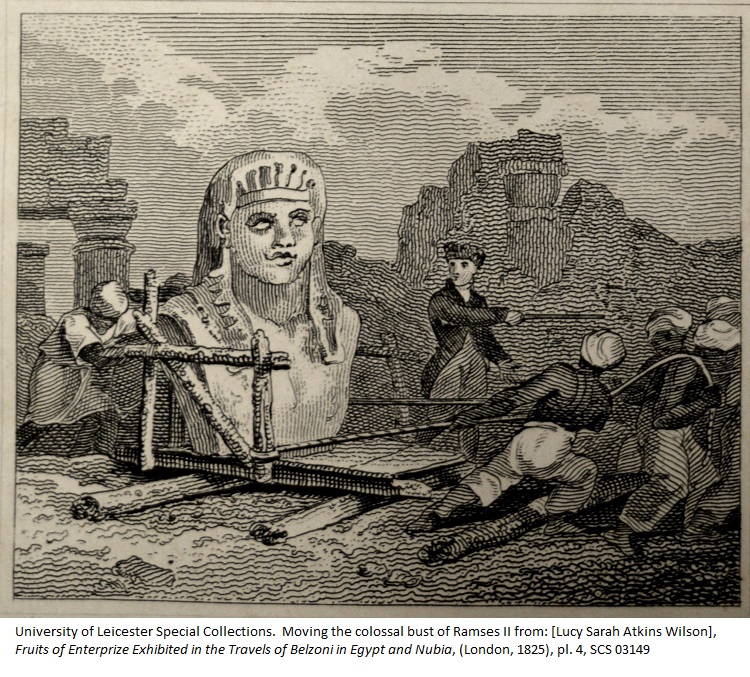 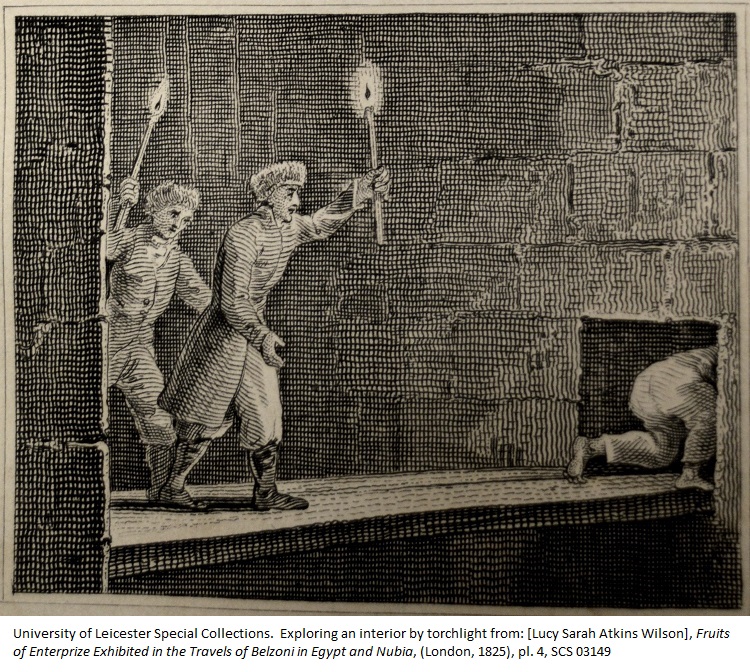 Belzoni’s first sight of Abu Simbel, which had been the previous year in August 1816, was not promising:

‘On approaching this temple, the hope I had formed of opening its entrance vanished at once, for the amazing accumulation of sand was such that it appeared an impossibility ever to reach the door. I calculated that the doorway could not be less than thirty-five feet below the surface of the sand, and to attempt to make an aperture straight through it to the door would have been like making a hole in the water.’5

He found the colossal statues at the entrance to the temple ‘almost entirely buried beneath the sands. The entire head and part of the breast and arms of one of the statues are yet above the surface; the head of the next is broken off, and the bonnets of the other two only appear’.6   The scale of the task he undertook is conveyed by this David Roberts lithograph. 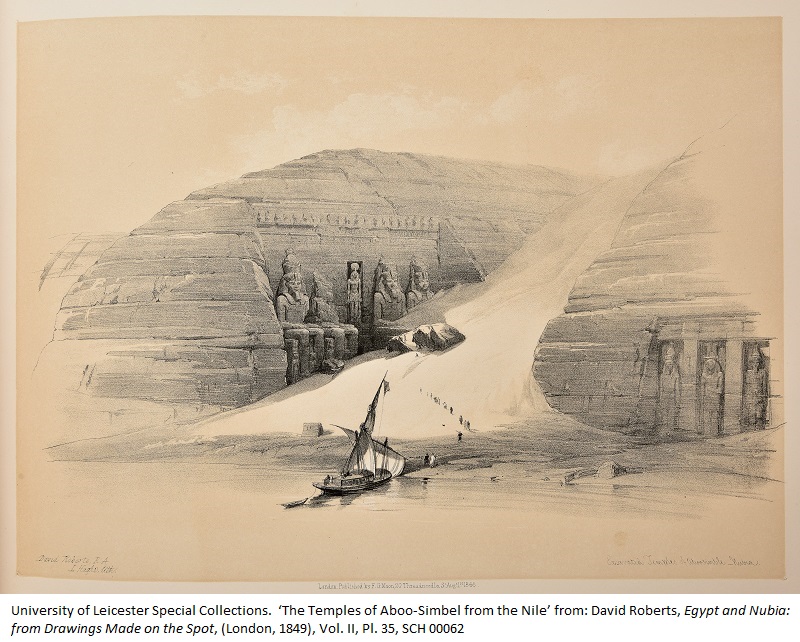 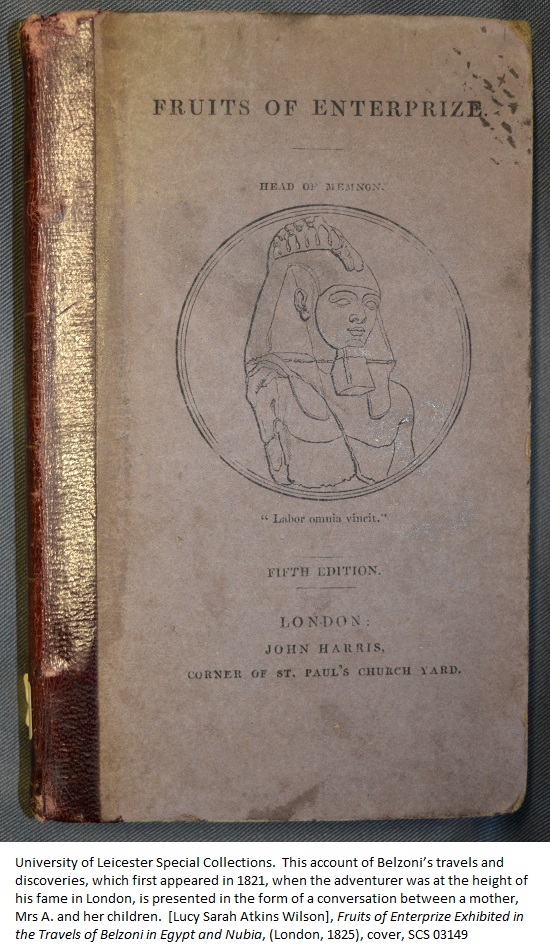 Belzoni documented his discovery of Seti I’s tomb with sketches and over 300 detailed watercolour studies, something that few would have thought to do at that time. Although many of the paintings were by his assistant Alessandro Ricci, some were by Belzoni himself.  His Narrative of the Operations and Recent Discoveries …, first published in late 1820, contained 44 plates of watercolour drawings, again some by Ricci but others by Belzoni himself.  He was an accomplished artist – yet another facet of this multi-talented man.

Howard Carter praised Belzoni’s work in the Valley of the Kings as ‘on the whole extraordinarily good’ and judged him ‘of serious and lofty purpose, and imbued with the great desire of bettering the knowledge of the world’7.  Belzoni had great physical strength, determination and resourcefulness, a combination which enabled him to work in the searing heat of Egypt and demanding conditions in the field at that time.  Somehow or other, he also managed to persuade the local people to cooperate and work for him; this helped him to succeed, where others had failed – in moving the statue of Ramses II, for example.  During his time in Egypt, his background in engineering meant that he evolved more effective techniques of excavation and he absorbed much knowledge of the subject.  Above all, he had an uncanny instinct for knowing where to look.