Posted by Simon Dixon in Library Special Collections on April 21, 2016

Since today is Queen Elizabeth II’s 90th birthday, Special Collections Assistant Ian Swirles has been searching the University Archives for photographs of Her Majesty visiting the University. Among the highlights are a series of images from May 1958, taken when the Queen and Duke of Edinburgh were on campus to open the Percy Gee Building. Ian writes:

These photographs of a young and radiant Queen Elizabeth were taken on 9 May 1958 when the Queen, accompanied by Prince Philip, made her visit to Leicester. 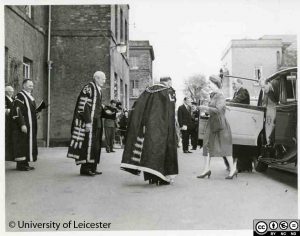 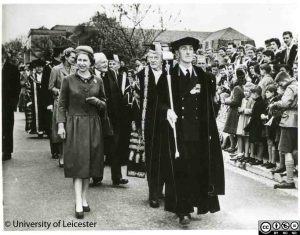 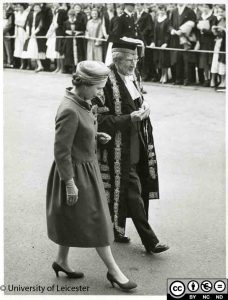 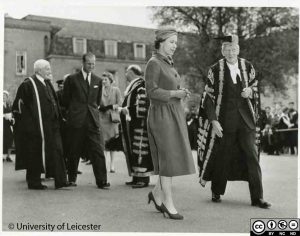 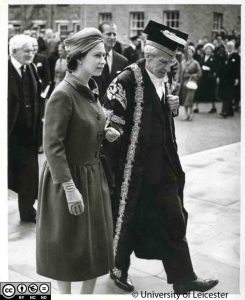 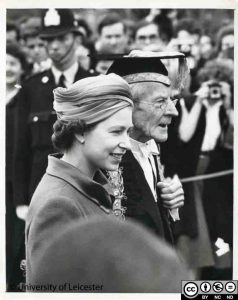 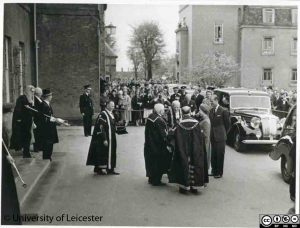 The construction of the building and royal opening received a great deal of coverage in the local press:

The main object of the royal visit is to open the new Percy Gee buildings at Leicester University.

The Building is named after Percy Gee, a very popular figure who served the University in one capacity or another for over forty years, as benefactor, Chairman of the University Council until 1959 and as the University’s first Pro-Chancellor.

The Percy Gee Building which has cost £360,000 will be one of the most magnificent buildings in Leicester and will provide facilities essential to an expanding University.

It was reported that the Queen and the Duke of Edinburgh were given an enthusiastic welcome by students at the Gee Building. The Queen made a short tour of the new building and talked to some of the students.

The seal was set on Leicester’s magnificently successful royal visit by the Queen’s personally expressed comment to the Lord Mayor that she had spent a most enjoyable day”.