Posted by Sarah Wood in Library Special Collections on April 29, 2016

Whilst many associate traditional celebrations of May Day with maypoles and Morris dancers, one early nineteenth century custom featured ‘Mayers’ (those included in May Day celebrations) arising at dawn to place branches of May outside neighbouring dwellings.

Performed as a symbolic gesture, the larger the branch placed at the door, the greater honour attributed to the house or to the servants of the house. If however, during the course of the year a servant had offended any of the Mayers then instead of a branch of May, a branch of elder with a bunch of nettles was fixed to their door: this was considered a great disgrace, and the unfortunate subject was ‘exposed to the jeers of her rivals’.

The laying of May branches involved a large party of town’s people, who would have paraded the town singing variations of the ‘Mayer’s Song’ whilst adorning each house, much to the trepidation of the awaiting neighbour.

May Day festivities often included comical characters providing musical entertainment and joviality. In Hitchin, Hertfordshire, the comedy duo known as ‘Mad Moll and her husband’ accompanied a group of dancers in the May Day parade; Moll dressed in rags and her husband brandishing a birch broom. If the gathering crowd came too close to the dancers, Mad Moll’s husband would sweep the road dust around the circle and into the faces of the crowd! 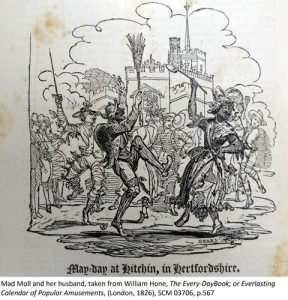 All of which can be freely accessed from Special Collections, basement of University Library.

For up to date information regarding access during the COVID-19 closure period see: https://www2.le.ac.uk/library/find/specialcollections/accesshoursandcontacts