Local Politics in Leicester During the 1890s

Posted by Margaret Maclean in Library Special Collections on April 29, 2015 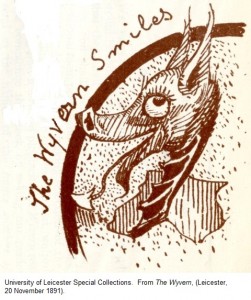 The forthcoming local council and mayoral elections in Leicester have made me wonder what issues were preoccupying our local administration during the period when The Wyvern, a rare local Victorian periodical, was in circulation. This short-lived but fascinating Topical, Critical & Humorous Journal appeared between 1899 and 1906. It was published from ‘18 ½’ Belvoir Street and observed political and social matters, the arts and sport in the city with wry humour. Around 16 pages long, it contained a full-page cartoon, ‘presented gratis with The Wyvern’, a small photographic portrait of a local worthy or personality on the front page and, later on, the occasional full-page photo of local sports teams. The adverts alone reveal a good deal about life in the city – where you can, for example, find the ‘best and cheapest dinners in Leicester’. None of this escaped the eye of the Wyvern, ‘witnessed from my perch on the top of the Town Hall’1. No doubt the true identity of the editor was widely guessed or known at the time, but sadly this information was not recorded. If you can help, please do contact us.

In the early 1890s, two of the major issues concerning the Wyvern were the crippling new borough rate, set in the wake of the Leicester Extension Act of 1891 (discussed below) and the ongoing debate as to how best to combat the smallpox epidemic of 1892-3 (considered in a future blog post). 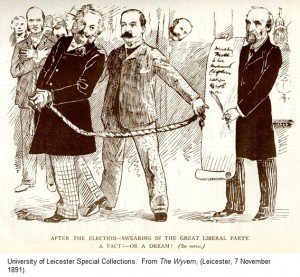 After the elections of 1891, Liberals outnumbered Conservatives on the borough council by 5 to 1. The Extension Act had increased Leicester’s population from 142,000 to 174,000, bringing in most of Knighton, Belgrave, Leicester Abbey and Aylestone, as well as parts of Humberstone, Evington and Braunstone. There had been considerable opposition to the act and, as a result, the corporation was forced to make special concessions to the residents of Belgrave and Knighton. Additionally, changes to the system of levying the rate were introduced. Watch and borough rates, for which land unoccupied by buildings had been rated at its full rateable value, were abolished and replaced by general district rates, for which land not built on was rated at only a quarter of its rateable value. This was to mitigate the burden of taxation on those agricultural areas now incorporated into the borough – but, of course, it also had the effect of making many in the ‘old’ borough feel that they were paying more than they should. ‘Alderman Hart,’ the Wyvern comments, ‘made a very lucid budget speech. He explained very clearly where the extra expenditure came in, but he omitted to explain what every rate-payer in Leicester is eager to know, not how it is the rates are higher, but how it is the rateable value of the town is lower’2. 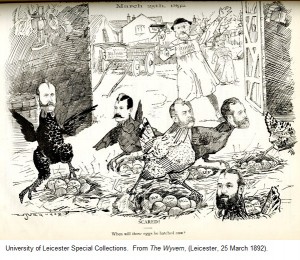 The Wyvern’s cartoon for 25 March 1892 depicts the local councillors as hens, startled away from the pet-project ‘eggs’ they are trying to hatch by the farmer with his four-and-tenpenny rate rattle. ‘Our big … rate seems to sound the knell of public improvements, and all the street widenings and slum removings that we had contemplated look as if they will have to come in the sweet by-and-bye.’3 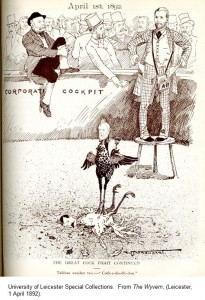 ‘The Great Cock Fight Continued’ in the Corporate Cockpit. From ‘The Wyvern’, (Leicester, 1 April 1892).

The farmyard theme is developed with the cartoon for 1 April, but here the councillors are shown in the ‘Corporate Cockpit’. ‘There is an individual in Leicester,’ the Wyvern remarks wearily, ‘who expects to have a clear statement as to the new assessment of the Borough, by which the town manages to have about £60,000 less rateable value than was expected! … You sit down and count out your four and tenpence, Mr Taxed, and think over … the charitable act which an almighty Corporation has enabled you to perform, in easing the pockets of the poor starving landowners.’4 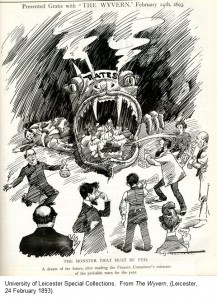 ‘The Monster that Must be Fed. A dream of the future, after reading the Finance Committee’s estimate of the probable rates for the year.’ From ‘The Wyvern’, (Leicester, 24 February 1893).

Unsurprisingly, the rates continued to rise over the next few years and the Wyvern’s indignation mounted. ‘The Monster that Must be Fed’, the rates are dubbed in this cartoon of February 1893.

Articles in this series