Posted by Simon Dixon in Library Special Collections on April 22, 2015

With a General Election campaign in full swing, it seems like a good time for some blog posts about the sources we hold on the history of British parliamentary elections. 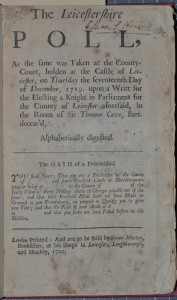 As we all head off to our local polling stations on 7 May, one thing that we will take for granted is that when we vote we will do so in secret. However, until 1872 things were not quite like this. Before that date it was normal practice for the names of voters and the candidates they voted for to be entered into a poll book. In 1711 legislation was passed requiring poll books from county elections to be delivered to the Clerk of the Peace after the election to be preserved among the local Quarter Sessions records. For borough constituencies, there was no such requirement until an Act of 1843 which required poll books from all constituencies to be deposited with the Clerk of the Crown in Chancery. Unfortunately for historians, this valuable collection of original documents was destroyed by the Crown Office in 1907.

During the eighteenth century it became common practice for poll books to be published by local printers and newspaper offices. The accuracy of these varies. Sometimes they were compiled from the original poll book, on other occasions they were published on behalf of one or other of the candidates using figures compiled by their own clerk. Published poll books were issued as soon as possible after the election, and so errors were common. 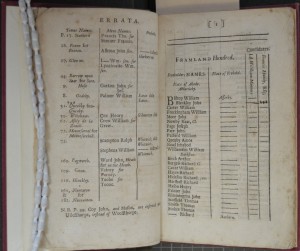 The Leicestershire Poll, 1719 (SCM 07128). Poll Books were published hastily and errors were common.

The Library has a collection of around 100 published poll books, most of which are held in Special Collections although a few later examples can be found in the Local History section (Floor 3). The collection includes examples from across England, although there is particularly good coverage of Leicester, Leicestershire and the East Midlands.

Our earliest example records the votes cast at a Leicestershire by-election held on 17 December 1719, called following the death of Tory MP Sir Thomas Cave. The candidates were Lord William Manners, a son of the Duke of Rutland and Whig, and Francis Mundy (Tory). The election was closely fought, Manners winning by 2,691 votes to Mundy’s 2,684. The poll book, printed in London and sold by Simon Marten, Bookseller, in Leicester, Loughborough and Hinckley, was published on behalf of Mundy and included a preface referring to a variety of forms of political corruption including bribery, the barring of those legally entitled to vote from doing so, and votes being cast by those ineligible. 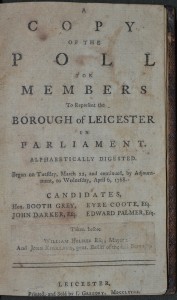 Our earliest Leicester poll book dates from 1768, and records the victory of two Whig candidates, Booth Grey and Eyre Coote, over their Tory opponents John Darker and Edward Palmer. An advertisement at the beginning of the volume describes the election as

having been very remarkable on account of the opulence of the candidates, the long continuance and obstinacy of the contest, the candour with which the contending parties behaved towards each other, and the uncommon tranquility . . . . which prevailed during the whole time of the Election; it is imagined that an accurate Copy of the Poll cannot fail to become an object of public curiosity.

One of the most interesting records of nineteenth-century elections in the Library’s collection is a volume containing a series of poll books and other election literature for Newark, Nottinghamshire, covering 1826-1832. As well as alphabetical lists of voters and their preferences, the volume also contains collected addresses, speeches and songs. Pasted into the front are two invitations ‘to drink tea with a party of the friends of W. [William] E. [Ewart] Gladstone Esq’ on 1 November 1832. Gladstone, the future Prime Minster, was aged 22 at the time and went on to serve as MP for Newark from 1832-1846. 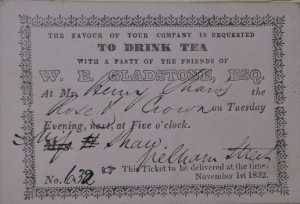 Inivitation to a tea part with the friends of William Gladstone, SCM 08352 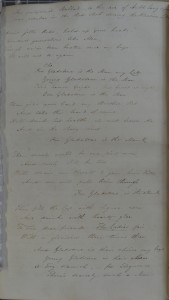 Gladstone’s supporters were organised into a ‘Red Club’, red being the Conservative colour at Newark. At the end of the volume are twelve manuscript pages containing a series of ballads sung by members of the club, which met at ‘The Clinton Arms’. A musical score survives in Nottinghamshire Archives, and one of the songs has recently been recorded as part of a University of Nottingham project on Gladstone.

The Library’s collection of poll books and other primary source material relating to British politics during the eighteenth and nineteenth centuries offers great potential for undergraduate and postgraduate dissertations. To explore poll books held by Special Collections search the Library’s holdings for ‘poll book’ and filter for location: Special Collections or email specialcollections@le.ac.uk for more information about using our collections.