Ripple: Publication of the Students’ Union

Posted by Ceri Ashwell in Library Special Collections on January 29, 2014 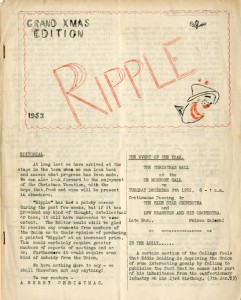 Welcome to our first blog post! The aim of the blog is to expand awareness of the items within our collection and of the resources we have available. As each blog post will be written on an item of interest by a different team member we hope to demonstrate the diversity of the items within Special Collections.

This first post looks at Ripple, the newspaper of the Student Union since 1952. I am currently completing an internship within the library and have spent the last couple of months with the Special Collections team. I started looking at Ripple when requests were sent in about bands that have performed at the university. As I was looking through old editions I realised that it provides an entirely unique, and sometimes unusual, look at the history of the University of Leicester. I decided to write the first blog post about Ripple to raise awareness of the collection and what it tells us about the university. I have looked at just under fifty years of Ripple, from 1952 to the millennium. At the end is a timeline to serve as a brief summary of the history of the university as told by the newspaper of the Students’ Union.

The first edition we hold is from December 1952; however this may not have been the very first edition. It is likely to have started in 1950, and perhaps even further back, but we do not have copies of those within the archives.

Although many might call Ripple a newspaper it is difficult to describe it as such. Initially it was formatted more like a magazine and even when it took on the look of a newspaper in the late 1950s it did not remain so. In 1971 it changed back to a magazine format, but back to a newspaper once again in 1973. However, for the majority of its history it has been formatted like a newspaper. It is likely that this lack of consistency was due to high turnover of Ripple editors; many resigned during their year-long term citing the suffering of their academic work as their reason. 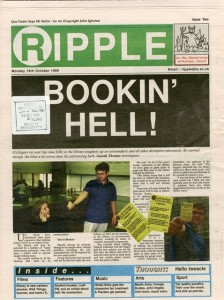 It is likely that the frequent change of Ripple editors explains why the focus of the publication alters throughout its history. Originally it only reported university news, but expanded in the 1960s and 1970s to include current events such as the Vietnam War and Northern Ireland. Looking through Ripple you learn about the strong and sustained support the union at Leicester had for the anti-apartheid movement. Events, boycotts and demonstrations were frequently reported on, from the 1960s until Mandela’s release. It is commendable how long their support lasted for. One of the bars at the union was named the Mandela bar to demonstrate their support. Later, these news stories were replaced in favour of reports regarding the university itself or more local news. During the 1990s Ripple focused on news directly related to the university and reviews of film, theatre and books.

Other frequent features which appear include letters to the editor and a sports page. Recipes for cheap meals were included; from 1969 there was the introduction of vegetarian meals as it was reported that vegetarianism was increasing in popularity. Often there was a feature which included news events from other universities; over time this expanded to institutions abroad. For much of the 1980s and early 1990s the paper contained a satirical piece they called ‘Pravda’ which served to reveal the ‘truth’ about well-known figures within the university.

You can book an appointment to view past copies of Ripple by emailing specialcollections@le.ac.uk. We are open from 9-5, Monday to Friday.