Posted by John in Bayesian Analysis with Stata on November 28, 2014

Last week I introduced the JAGS program as an alternative to WinBUGS and this week I started with the intention of comparing JAGS and WinBUGS using a sample dataset. I decided to base the comparison on the biopsy example taken from the WinBUGS help files.

Predictably, by the time that I had explained the model and fitted it by calling WinBUGS from Stata, I had already exceeded the quota of words that I allow myself each week, so I have split the posting in two. This week I will analyse the biopsy data in Stata by calling WinBUGS and next time I will make the comparison with JAGS.

These data are supplied with WinBUGS as one of its examples and come from an early study of biopsies taken from transplanted hearts. The data were originally analysed in,

During the first year after a heart transplant, patients have regular biopsies to check for rejection. Biopsies are done under local anaesthetic and involve passing a wire through a vein until it reaches the heart. Once there, 4 or 5 tiny tissue samples are taken from different parts of the transplanted heart and later these are graded by a pathologist for cellular changes that are indicative of rejection. Rejection grading is usually done on a four point scale, none-mild-moderate-severe. A moderate or severe grade would probably lead to an adjustment of the patient’s immunosuppression treatment.

At the time of this particular study the practice was to take 3 biopsies but, for a few subjects only 2 usable samples were obtained. In all, the dataset contains grades for 2 or 3 biopsies from 157 hearts. A typical data entry might be (1,2,0,0) meaning that there were 3 biopsies taken from this heart and one biopsy was graded ‘none’ and two were graded ‘mild’.

Cellular changes related to rejection are not uniform across the heart and a serious concern is the false negative rate whereby a heart is being rejected but by chance the biopsies are all taken from healthy areas of tissue; several biopsies are taken at the same time in order to minimise this risk. The overall state of a heart is defined by the grade of its worst affected region (not the worst biopsy). So when three biopsies are taken from a ‘moderate’ heart, the results might be (mild,mild,moderate) or (mild,moderate,moderate) or even (none,mild,mild) if the ‘moderate’ region is missed.

A model for these data has two components, a set of probabilities p1, p2, p3, p4 representing the proportion of hearts that are none, mild, moderate or severe and a matrix of classification error probabilities, e[,], connecting the heart’s grade with the grade of a single biopsy.

Obviously a heart that is mildly affected could never produce a severely affected biopsy, so there are constraints on the e’s and there are only six free parameters. We will make one further, rather strong, assumption, which is that the three biopsies are independent of one another given the overall grade of the heart. The under this model the probability of the data entry (1,2,0,0) is p2*3*e21*e222 + p3*3*e31*e322 + p4*3*e41*e422

It would be an interesting exercise to try and set meaningful priors on the p’s and the e’s but for the purposes of this exercise I will follow the WinBUGS manual and use flat Dirichlet priors over all of the sets of probabilities that must sum to one.

Here is the WinBUGS model file for this problem

Now let’s see how WinBUGS handles the structural zeros in the values of error[]. Specifying this matrix correctly is essential if the model is to fit. Part of error[] is structurally known and so needs to appear in the data file and part of error[] is to be estimated and so it also needs to appear in the initial values file. In each file the remaining part is replaced by a missing value, NA.

I copied and pasted the biopsy data from WinBUGS into a text file that I called biopsy.txt, I then used the wbsdecode command to read these data into Stata and I kept the 157×4 dataset in the form of 4 Stata variables that I called grade1, grade2, grade3 and grade4. These data were saved in a file called biopsy.dta. Here is the Stata code that does that job,

Now we are in a position to write a Stata program for fitting the model using WinBUGS.

Convergence is not a problem so I will only show the trace plots of p[]. 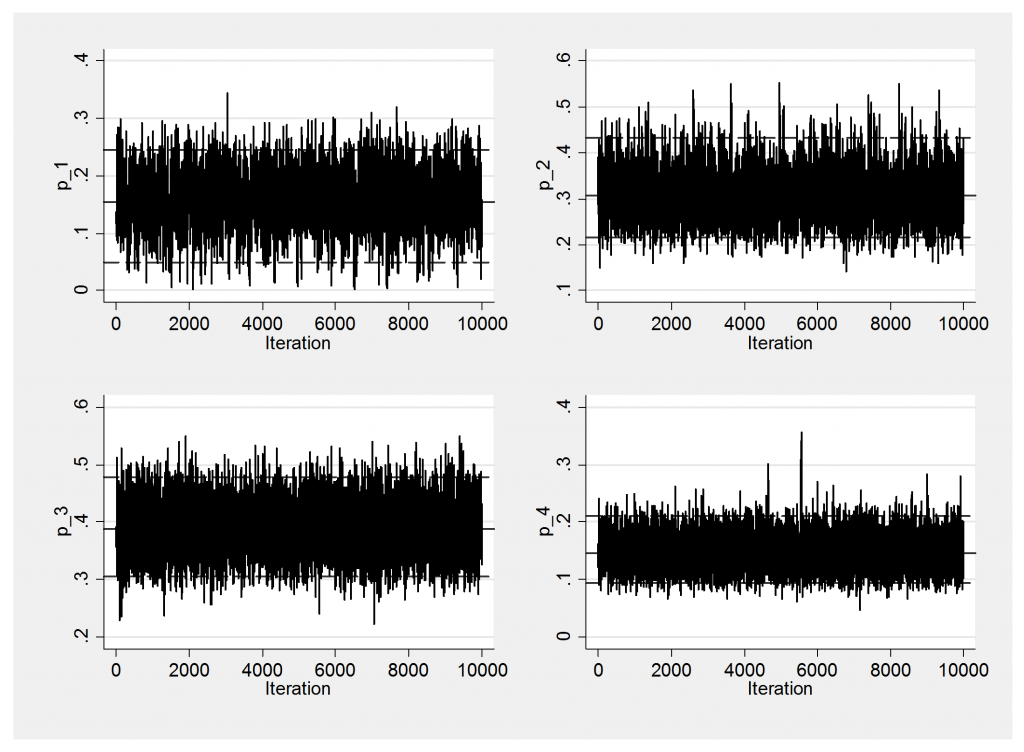 Here are the results.

The only problem is that I do not like the answer.

It is estimated that about 1/3 of hearts show mild rejection, so it is not as though the mild category has been defined so narrowly that it is never seen in practice. These data give the picture of one or more regions of rejection with other regions with no rejection but nothing in between. In fact we hardly ever see mild biopsies unless the heart’s grade is mild.

It must be the case that,
• the mild category is truly a rare biopsy in a heart that is being rejected,
• something has gone wrong with the fitting,
• the model is wrong,
• we have not used our prior knowledge properly.

First we should look at the fit of the model but with discrete data of this type it is not obvious what scale we should use. In the end I decided to look at the average biopsy grade for each person and to contrast it with the predicted average under this model.

Now we can use mcmccheck to create some residual plots. Here is the predictive distribution for heart 119 with the observation (none,mild,moderate) and an observed mean of (1+2+3)/3=2. 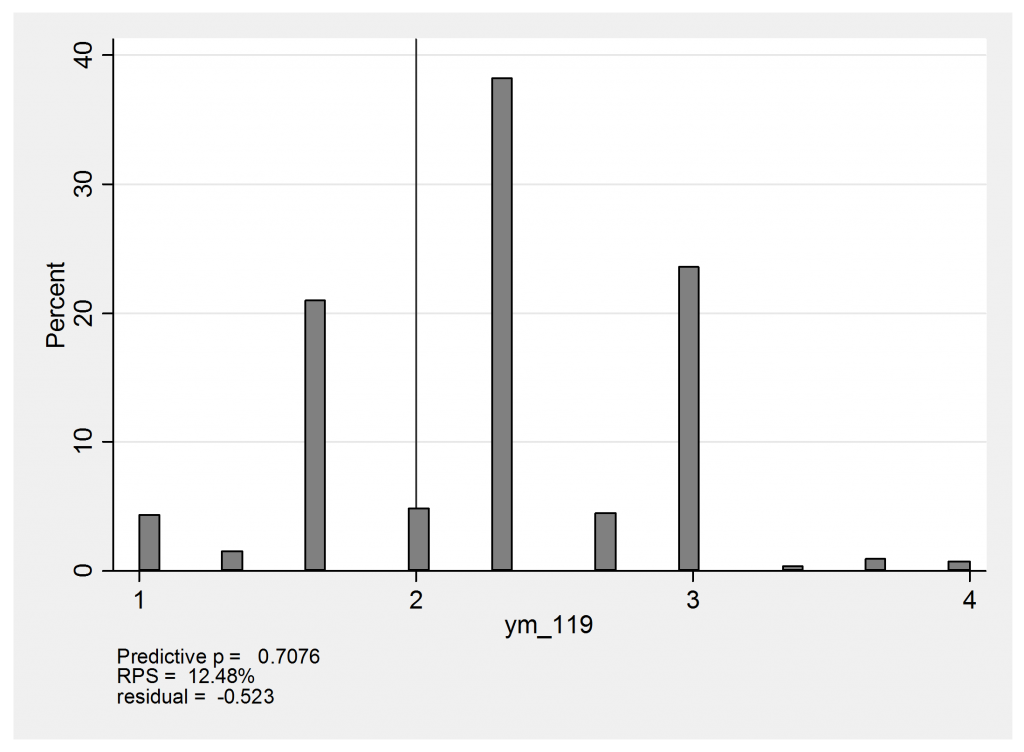 The predicted values of 1 arise from the possibility that this person is actually moderate or severe but the affected region is missed entirely and the biopsies are (none,none,none). The score of 4 would come about if the heart were actual severe, in which case there would be the chance that the biopsies would be graded (severe,severe,severe) instead of the observed (none,mild,moderate). In reality this heart has a mean score of 2 and falls just below expectation so that the standardized residual is about -0.5.

Here is the summary residual plot, 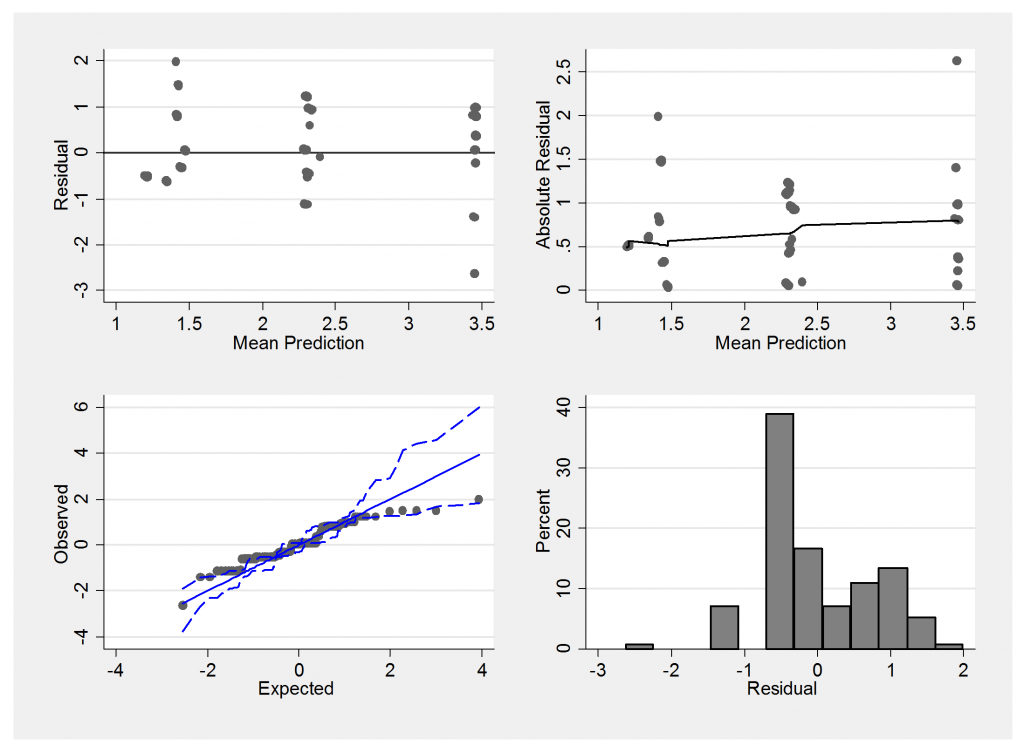 We must be careful not to judge these plots in the same way that we would the residuals from a linear model. The underlying scale is essentially discrete and so we would not expect normally distributed errors. Notice how the mean predictions suggest only 3 main groups with means falling between none and mild, mild and moderate and moderate and severe.

Since a proportion 0.2 of the line is affected, we will obtain two affected samples with probability 0.2*0.2=0.04. The actual results vary slightly because of sampling error but here is a typical set that shows the anticipated pattern,

Now a typical set of results is,

My suspicion is that for this particular data set, the assumption of independence of the sets of biopsies taken on the same occasion is an oversimplification. The oversimplified model will not predict the data very well and any attempt to interpret error[,] may be misleading.