Digging Out the Past – the legacy of Alan McWhirr

Posted by Colin Hyde in Library Special Collections on June 13, 2019 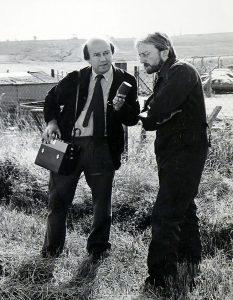 Alan McWhirr in a field.

The first collection we have finished digitising for the Unlocking Our Sound Heritage (UOSH) project is a monthly radio series about archaeology, Digging Out the Past. This ran from 1979 – 1989 and was produced and presented by the archaeologist Alan McWhirr for BBC Radio Leicester. The series covered some important events, such as the 1988/9 Shires excavations in the heart of Leicester, and we are delighted to be working with the collection.

Alan McWhirr (1937-2010) was a teacher and lecturer who mainly worked in Leicestershire, but who also directed archaeological work in Cirencester from 1965 until the mid-1970s. He wrote many articles and books, edited magazines, and made a huge contribution to local archaeology and historical heritage. Digging Out the Past is only one part of Alan’s legacy.

In the 1970s, having noted the success of educational material on BBC Radio Leicester, Alan approached the station manager, Owen Bentley, with the idea for a series about archaeology and was told to go ahead as long as he produced it himself (tight budgets and overworked staff are nothing new). Alan took up the challenge and produced more than 100 programmes of what became a highly popular series. Ninety eight of these recordings survive and have been digitised for the UOSH project.

Marilyn Palmer wrote that, “One would be quietly digging away on a site in Leicestershire, or measuring up a building, and Alan would appear in the distance with his recording equipment, including a large, grey, fluffy microphone which would appear in front of your face as you were encouraged to talk about what you were doing! His skills in local radio and magazine editing have ensured that the people of the city and county of Leicester are well aware of, and proud of, their archaeological and historical heritage.”

These programmes enable the listener to hear the voices of some of the most well-known archaeologists and local historians to have worked in Leicestershire in the 1980s. Many of these researchers are still with us. Richard Buckley, for example, played a major part in the recent story of the discovery of the body of Richard III, while Peter Liddle, Marilyn Palmer and others have made important contributions to our understanding of the history of the City, the County and the region. In the City, following the Highcross excavations of 2007, archaeologist Matthew Morris has said that, “In terms of percentage of area looked at, Leicester today is probably the most intensively investigated continuously occupied city in Britain. I would say that London is probably the only place that can rival it.”

A full appreciation of Alan’s career can be read in this obituary, by Marilyn Palmer – https://www.le.ac.uk/lahs/downloads/UniversityObituaryforAlan.pdf