A celebration of 100 years ago today, by Caroline Wessel

Posted by Simon Dixon in Library Special Collections on April 4, 2019 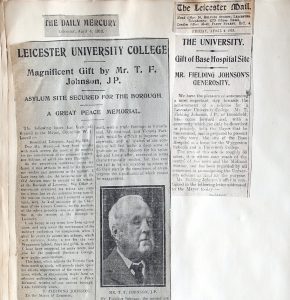 On Friday 4 April 1919 Mr Thomas Fielding Johnson purchased the 36-acre site of Leicester’s 5th Northern Base Hospital, where nearly 75,000 injured First World War soldiers had been nursed, as a gift to house the proposed new Leicester, Leicestershire and Rutland College. When Dr Astley Clarke, a prime mover in the cause of establishing a university, told Mr Johnson that he hoped to secure the purchase of the premises, Johnson replied, “You can’t … because I have already done so!” Archives and Special Collections volunteer and member of the University Court, Caroline Wessel, takes up the story.

When the news was made public, the local press warmly praised this act of extreme munificence, asserting ‘this gift to the borough is unquestionably one of the noblest in its history’, and ‘one of the landmarks of local life’. Later Mr Fielding Johnson purchased the buildings themselves, gave a piece of land to Victoria Park, to enhance the approach to the proposed College, and allocated an area for the erection of new boys’ and girls’ Wyggeston Schools. The newspapers expressed some relief that the site had not been sold to a speculator for new housing, but the issue was soon raised that at least £150,000 must now be found to fund the building alterations and fixtures needed for the College. 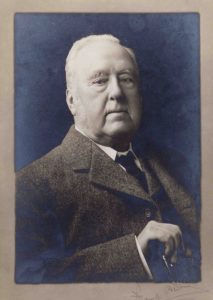 The 91 year old Thomas Fielding Johnson was in all respects a well-loved gentleman – both as the Chairman of his prosperous worsted manufacturing business and as a prominent and considerably generous philanthropist to the town. A Freeman of Leicester, town councillor, Justice of the Peace, special constable, prison visitor, Vice President of Leicester Infirmary, trustee of Wyggeston’s Hospital, and keen supporter of the Wyggeston schools, for many years he had given his time and effort equally as willingly as his money. 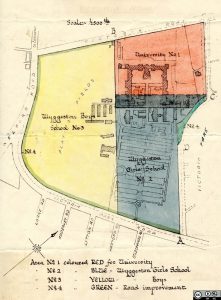 The buildings had now been successfully acquired, but an examination of the first Annual Reports and Minute Books gives a clear picture of all the practical work that would have to be done before the College could open its doors to its first students – and how significant private endowments would be needed to fund it. Mr Johnson paid for the erection of iron fencing around the perimeter, and planted fifty beech trees to enhance the landscape, but the military authorities were still in possession of some areas and various army huts and other paraphernalia would have to be removed or adapted. The buildings erected by the military were their property and would cost £9,900 to purchase and the two open hospital wards could be bought at £1,600 each; but the army must undertake any repair work themselves.

An architect needed to be appointed, initially to prepare a report on the reconstruction and adaptation of the buildings plus its estimated cost, and then to oversee all the necessary work. So Mr William Keay was engaged. He was a civil engineer and since 1911 had worked with the Leicester firm of Everard, Son and Pick, becoming a partner in 1921. He was broadening his work into architecture and in due course would become a FRIBA, County Architect for Leicestershire County Council and Master of the Fabric of Leicester Cathedral. During the 1920s and 1930s his work included a number of significant civic buildings, churches and private residences, but the new University College was his first major commission. 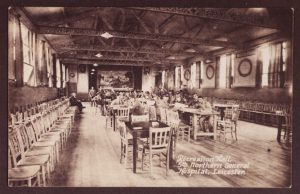 In January 1920 the Chairman of the College Finance Committee reported that the Hospital’s Recreation Hall, erected by public subscription, would be donated by its Entertainment Committee, plus 300 chairs and some garden tools. Some workshops, funded for the Hospital by Leicester Rotary Club, would be given by them as teaching workshops and a YMCA hut erected on the site during the war could be useful and negotiations should be initiated with them; the Duke of Rutland would be approached to enquire whether he was willing to hand over the Orthopaedic Building, erected in 1916 at his own expense and that of the High Sheriff, Mr Alfred Corah, and William Curzon Herrick Esq. of Beaumanor – the latter a gift in honour of his marriage.

Regarding the possible transfer of the Domestic Science College from Leicester town to the College site, it could be accommodated in the Doctor’s house, laundry and nurses quarters and Forest View House might be used as its hostel. In addition a detached building at the south end of the site was well suited for the proposed Pharmacy School. An extra source of income would be to charge a rental of £120 p.a. from the Ministry of Pensions, who were currently occupying part of the land. Two gardeners were appointed to clear up the College grounds; their pay was raised from 50/- to 55/- a week, but the men asserted that, with the acute rise in the cost of living, they would require higher wages than that. The Lodge House needed to be cleaned and painted, to serve as a Caretaker’s residence and at the sale of Hospital effects the College purchased the fire extinguishing apparatus and 30 fire buckets. Committee member, Sir Samuel Faire, was concerned that there was no provision in the main building for hot water or central heating – but was told that this would have to wait!

Plans were put forward for a botanical garden on the site, including water and rock gardens, but this could not proceed until the Church Extension Board removed their iron church to its new home. Mr Horwood of the Museum was appointed as Hon. Secretary of the Botanical Gardens sub-committee and he agreed to ask colleagues for botanical specimens. 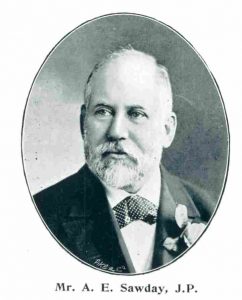 In September 1920 a new Building sub-committee was set up, with Mr Joseph Goddard and Mr Percy Gee serving, and respected architect and former Mayor of Leicester, Alderman Albert Sawday, appointed as Chairman. Mr Sawday commenced his practice in the town in 1877, had designed a number of non-conformist churches, a school and a bank, and laid out the new County Cricket Ground and Pavilion. For many years a Justice of the Peace, borough councillor and Chairman of the Estate Committee, he was also an ex-President of the Leicester Free Church Council, President of the YMCA and Hon. Secretary of the Leicester Liberal Association. When he died in 1923 the College Council minuted their praise for him as ‘a valuable member’. Building firms were then invited to send in tenders for the necessary work and eleven were received. The College accepted the lowest quotation of £5,389 and engaged the services of J. Bentley & Co. of 167 Clarendon Park Road.

There was an ever-present need for much more money to meet all the costs of preparing the old Hospital site for the new College. Many appeals to the public were made and personal contacts with important families put to use. One suggestion was that those who could not afford a sizeable endowment might be encouraged to give a smaller annual subscription. Several committee Minutes record the anxiety that not much money was coming in, though at other times generous donations were received, including many gifts in kind.

So it says much for the perseverance and dedication of those early founders that the new University College building, given exactly one hundred years ago, was in readiness by September 1921 to welcome its first students. 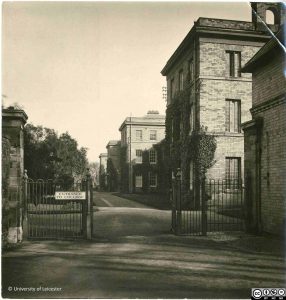 ULA/D2/1, Scrapbook of Dr Astley Clarke containing cuttings and documents relating to the founding of Leicester, Leicestershire and Rutland College

Presidents of the Leicester Literary and Philosophical Society