A tulip bulb, the value of which would have fed ‘a whole ship’s crew for a twelvemonth’

Posted by Margaret Maclean in Library Special Collections on April 7, 2017

The tulip, with its bold, eye-catching flowers in a wide variety of gorgeous colours, is in bloom, in many of our spring gardens, making one of their most striking features. In common with many flowers, it has gone in and out of fashion over the centuries – but the tulip’s history has been more dramatic than most. 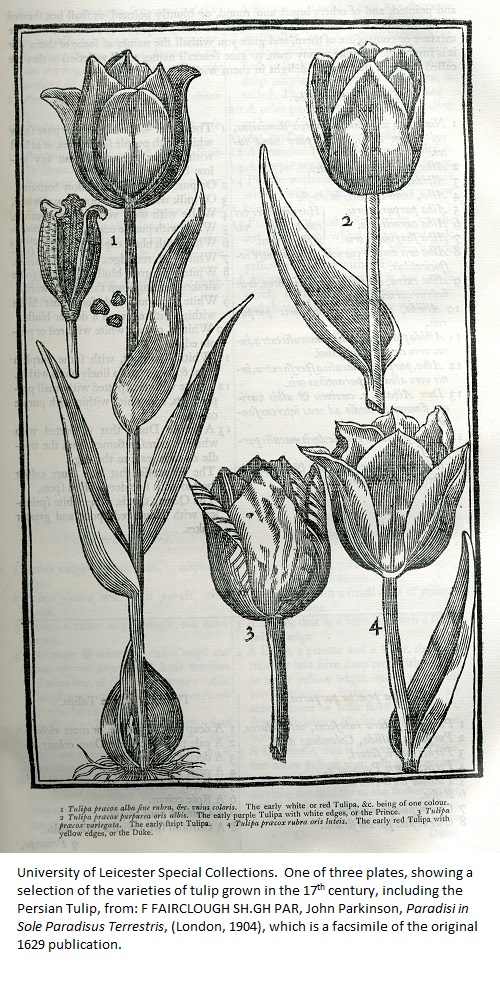 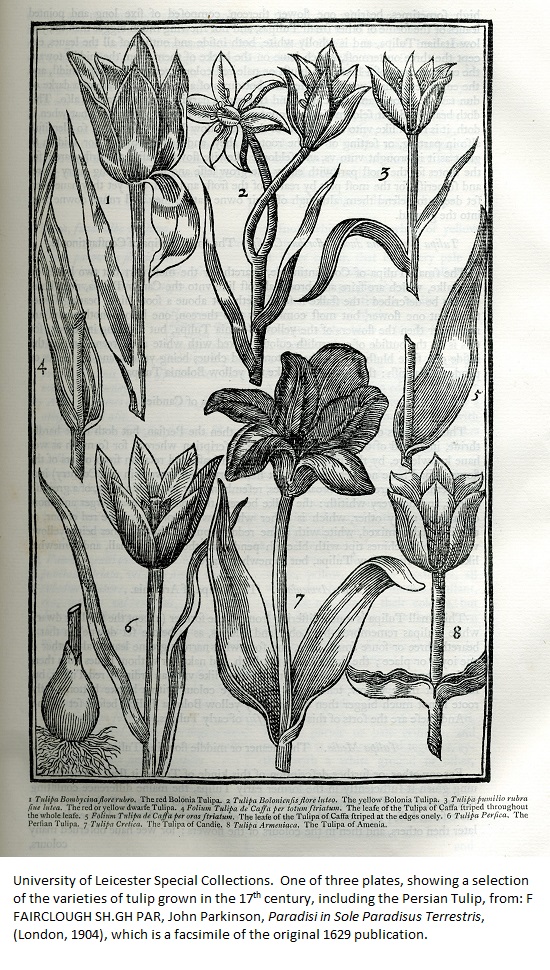 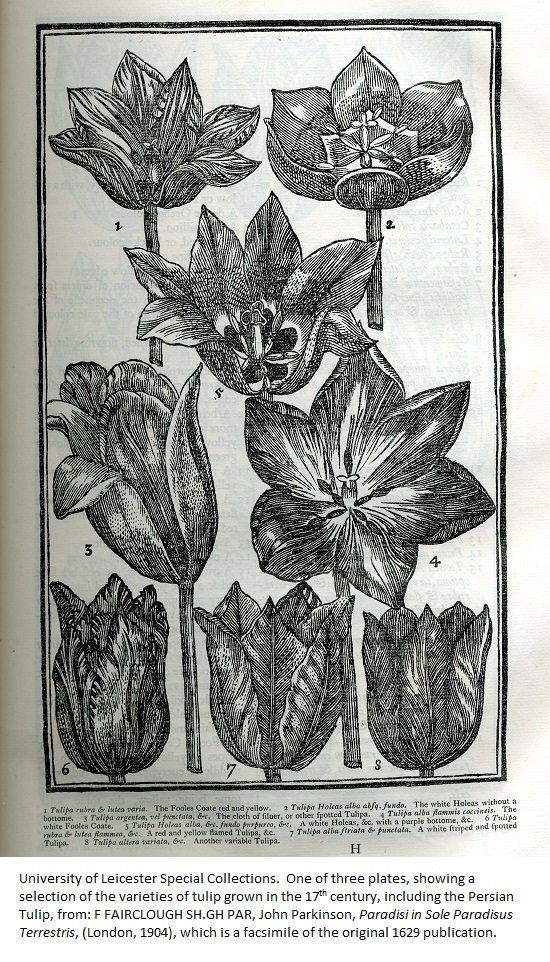 It is widely believed to have been introduced to Western Europe in the 1550s by Ogier de Busbecq, ambassador to the Sultan of Turkey from the Holy Roman Emperor.  De Busbecq describes his first sighting of the blooms in the countryside through which he travelled on his way to Constantinople:

‘There grew abundance of Narcissus’s, Hyacinths, and (as the Turks call them) Tulips, which we beheld, not without admiration, that in the midst of Winter … the Ground should be so garnished by them … the Tulip hath little or no Smell, but its gaudiness and party-colouredness is its greatest commendation.  The Turks are great Admirers of Flowers, so that, tho’ they are parsimonious enough in other cases, yet for a stately Flower, they will not scruple to give some Aspers.’1 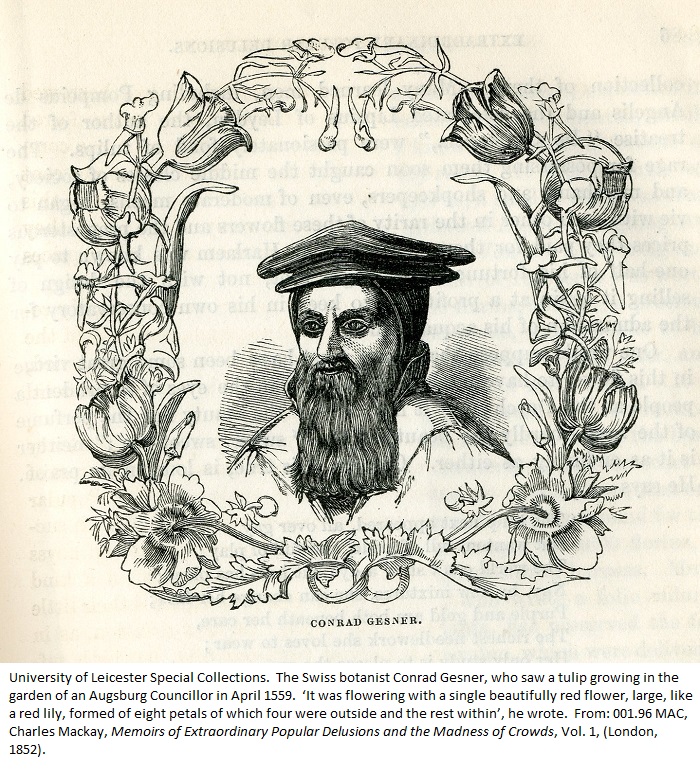 Some bulbs were presented to De Busbecq as a gift and, from Vienna, cultivation of the tulip gradually spread to the Netherlands, where its intensely coloured blooms found favour with a merchant class made wealthy by the East Indies trade. It seems likely that there was also another independent source of distribution of tulip bulbs through Antwerp; the botanist Carolus Clusius, influential author and later Professor of Botany in Leiden, writing in about 1570, tells the story of a merchant of that city, who received tulip bulbs with a consignment of cloth from Constantinople and, thinking that they were onions, had some cooked and eaten with oil and vinegar.  The merchant also ‘dug [others] into his garden amongst the cabbages and other vegetables …’2 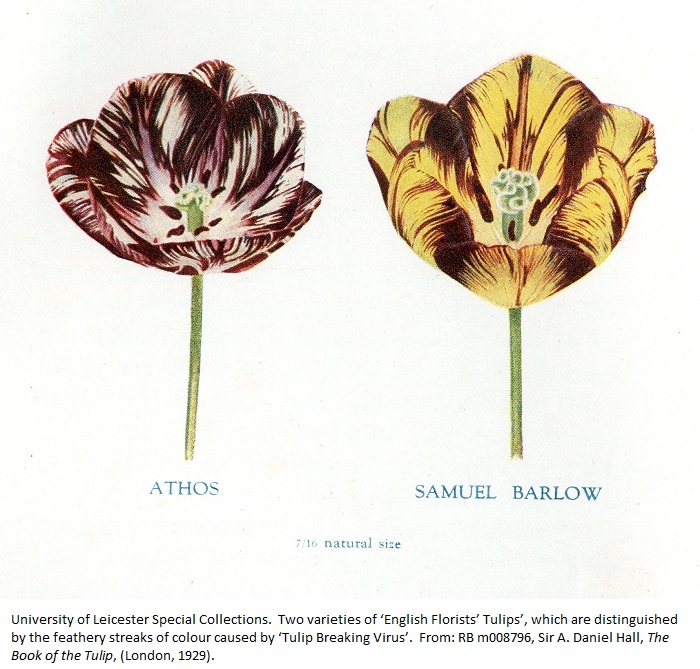 Clusius met De Busbecq in Vienna in 1572, obtaining tulip seeds and bulbs from him, and, in 1593 he took his tulips with him to Leiden, where (unsurprisingly, because of the huge prices he asked for them) some were twice stolen from his garden by night. The popularity of these flowers, so startlingly different from any others known in Western Europe at the time, spread rapidly and the resulting ‘tulip mania’ or ‘tulipomania’ of the 1630s, during which tulips became a highly sought-after luxury item and status-symbol and commanded rocketing, eye-watering prices is well-known.  Dutch growers vied with each other to produce a multitude of different varieties, especially those known as Bizarres, with their multi-coloured streaks.  This phenomenon is actually caused by a virus, known as ‘Tulip Breaking Virus’ – but that was not discovered until 1928.  Contracts to buy tulip bulbs at the end of the season were bought and sold in trading known as windhandel (wind trade), because no actual bulbs were exchanged and many of the traders in fact never even had one in their possession.  Of course, this could not go on indefinitely and in February 1637 the ‘bubble’ abruptly burst. 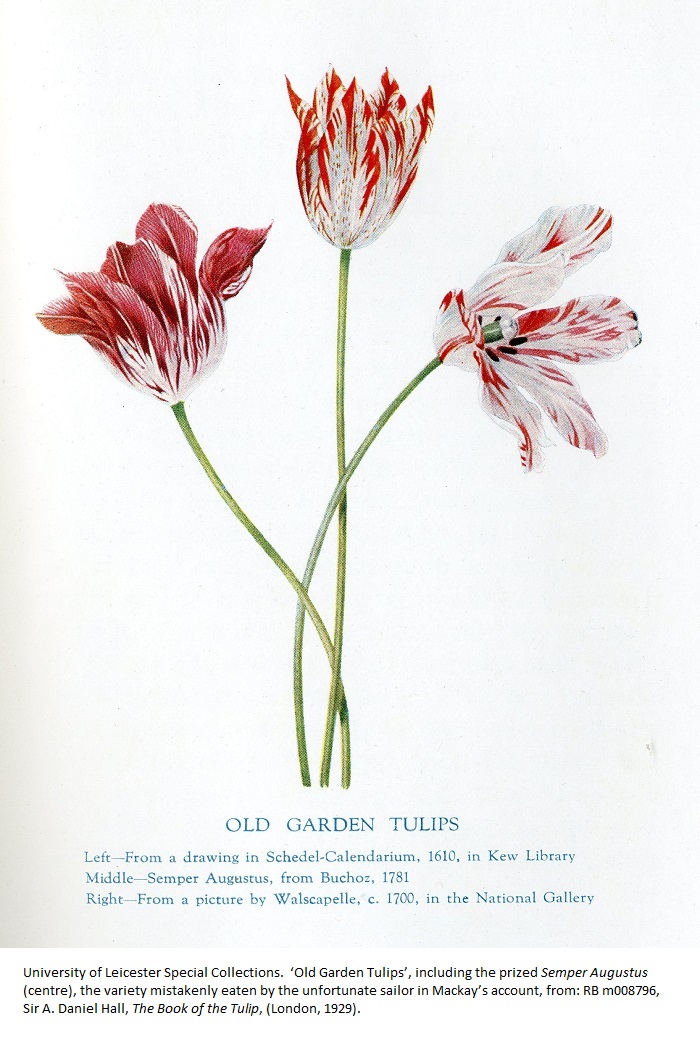 Discussion of ‘tulip mania’ has been heavily influenced by Charles Mackay’s Memoirs of Extraordinary Popular Delusions and the Madness of Crowds, originally published in 1841.  According to Mackay’s account, ‘In 1634, the rage among the Dutch to possess [tulips] was so great that the ordinary industry of the country was neglected, and the population, even to its lowest dregs, embarked in the tulip trade’3.  The theme of mistaking tulip bulbs for onions recurs in Mackay, with the story of a sailor, who, having been gifted a ‘fine red herring for his breakfast’ by a wealthy merchant, spied what he thought was an onion on the counter and ‘slipped it into his pocket, as a relish’, only to find later that he had, to his horror, eaten a Semper Augustus, worth 3,000 florins, which would have fed ‘a whole ship’s crew for a twelvemonth’4.  Modern scholars have disputed several aspects of Mackay’s account of the ‘bubble’, arguing that available evidence suggests ‘tulip mania’ was confined to a small number of merchants and wealthy craftsmen and that the economic fallout was limited.  But, whatever the case, it is accepted that, in 1636/7, tulip bulb contracts did fall dramatically from their previously inflated prices. 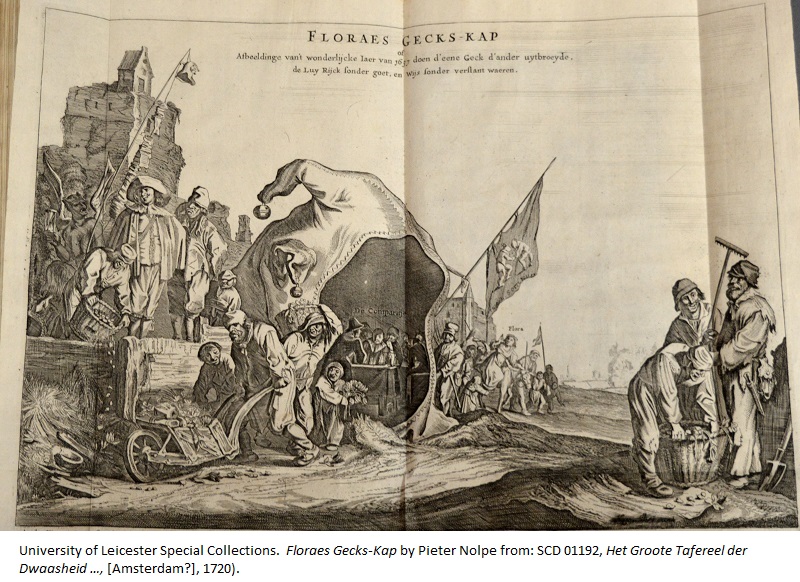 This print, Pieter Nolpe’s Floraes Gecks-Kap (Flora’s Fool’s Cap), first published in 1637, is taken from a 1720 volume in the Special Collections, part of the James Johnson Bequest, Het Groote Tafereel der Dwaasheid (The Great Mirror of Folly).  This folio appeared in Amsterdam only months after severe stock market crashes in England, France and the Dutch Provinces and is a fascinating collection of material relating to the Mississippi, South Sea and other ‘Bubbles’, comprising a mix of satirical and didactic verse and plays, farces, pamphlets – and a remarkable wealth of topical images, mainly satirical and allegorical prints, but also maps and even designs for decks of playing cards. Floraes Gecks-Kap, which satirizes ‘tulip mania’, is reproduced in it, without alteration.  In the centre of a rather barren landscape, is a tent shaped like a giant Fool’s Cap with bells, in which tulip traders with their scales are negotiating deals.  The flag hanging from the tent is decorated with two jesters wrestling.  Outside, to the right of the tent, the goddess Flora (helpfully labelled), seated on a donkey, is being driven away by a group of angry peasants.  To the left of the tent, growers are throwing a wheelbarrow and baskets full of tulip bulbs onto a rubbish heap.  Behind them, stands a fashionably attired trader with a self-satisfied smile, who has clearly made his fortune from tulips, and next to him is a demon, holding an hourglass and pole, from which hangs a string of contracts for tulip bulbs and another Fool’s cap. 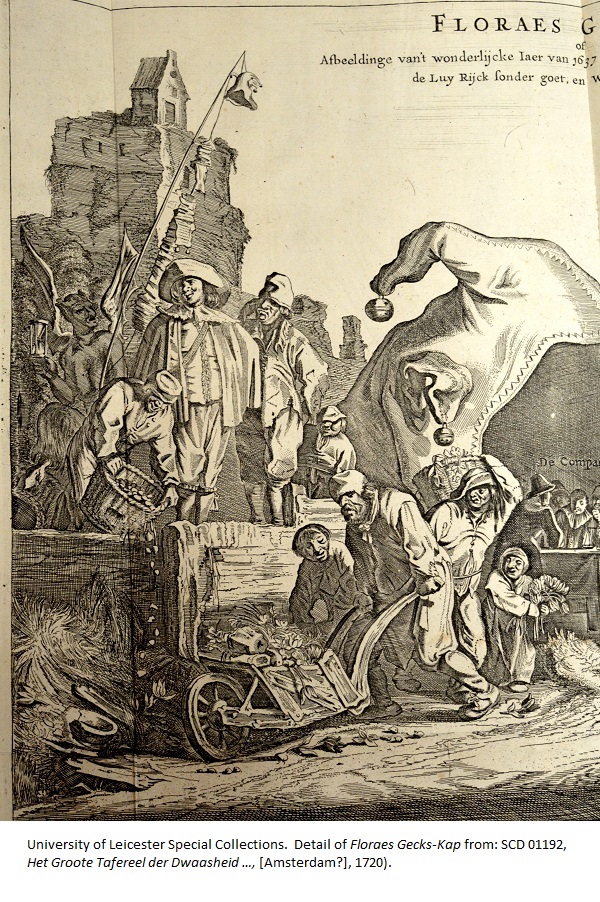 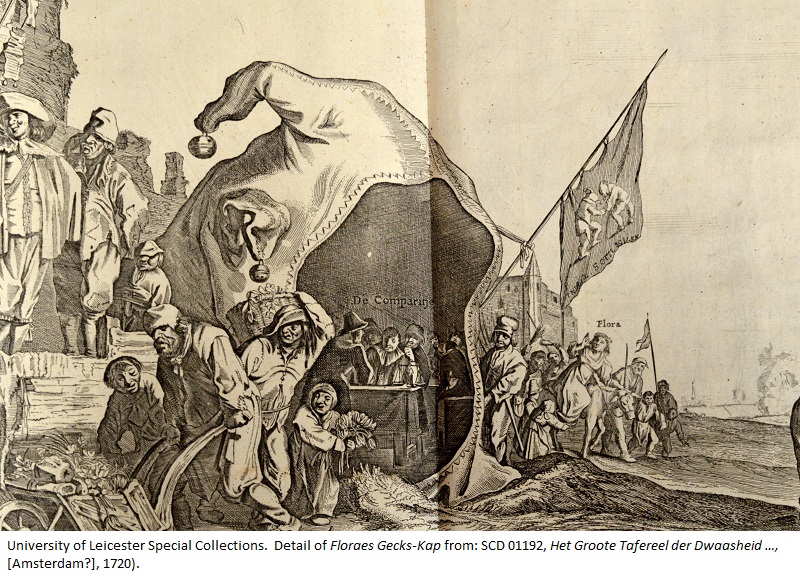 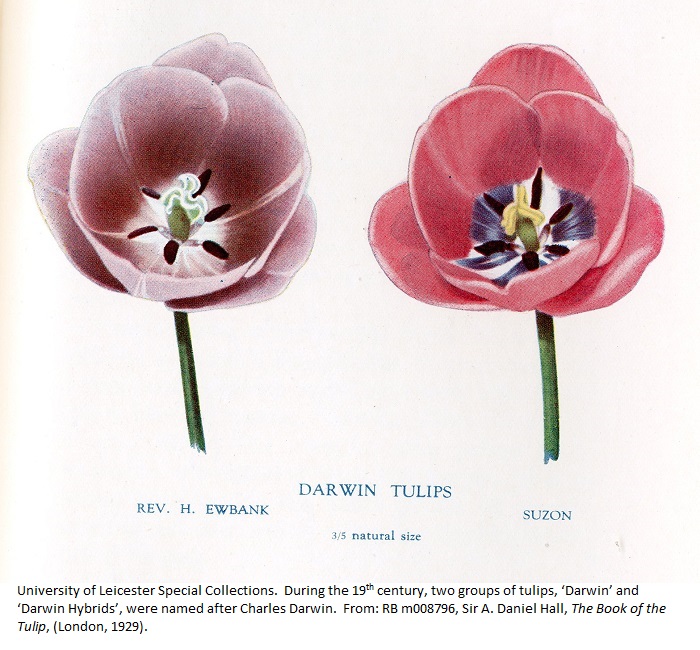 In spite of the painful repercussions of ‘tulip mania’, gardeners continued to covet these beautiful flowers. In the Victorian era, tulips came firmly back into fashion, as a focal point in formal, symmetrical ornamental beds. The Garden, or Familiar Instructions for the Laying Out and Management of a Flower Garden, published in 1831, recommends planting tulip bulbs in November:

‘Tulip fanciers usually plant their bulbs on or about the Lord Mayor’s day [then celebrated on 9 November]. You will say this is rather a cockney time to fix on.  Be that as it may, remember to protect them … from heavy rains, as well as from frosts … Should the winter be very severe, you must put a little straw over them.’5 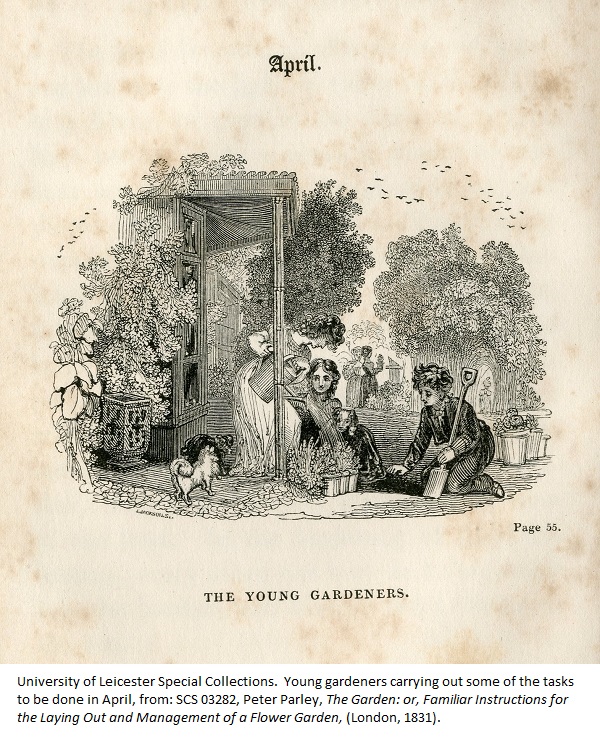 The successful calendar of tasks in the garden, Every Man His Own Gardener, first published in 1767 and reissued in several subsequent editions, makes clear the value placed on tulips, with its detailed instructions both for planting and lifting bulbs and for ensuring, during the month of February, that they will go on to produce the best blooms:

‘Defend the beds of the more curious or valuable tulips … from frost, snow and excessive rains; the plants will now begin to appear above ground; and the beds wherein the finest … are planted should now … be arched over with hoops; and in frosty or extremely bad weather, let mats or canvas be drawn over to defend the advancing flower-buds.’6 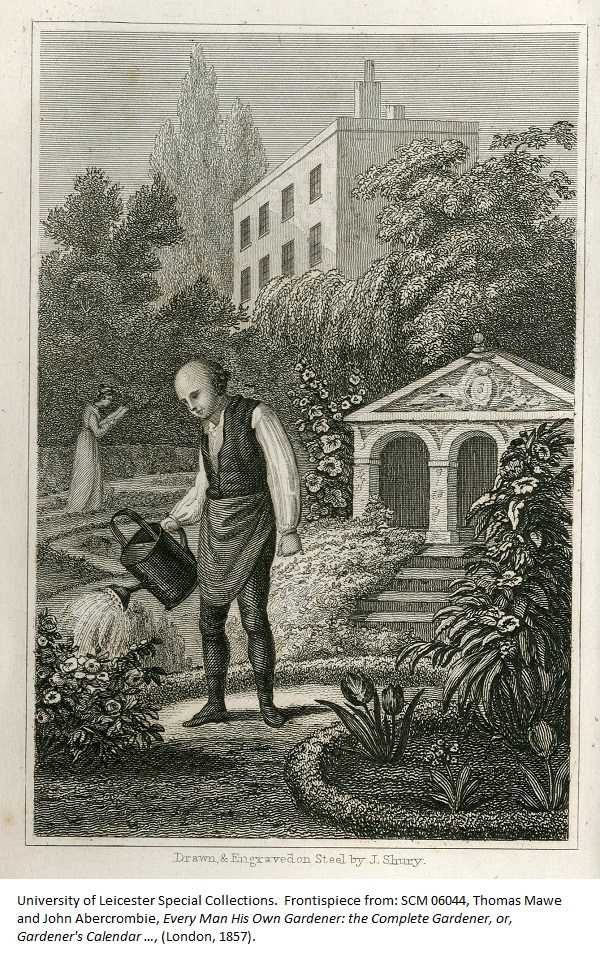 The plot of The Black Tulip by Alexandre Dumas, which was first published in 1850, harks back to events in the Netherlands of the 17th century.  Thirty or so years after ‘tulip mania’, a considerable reward is offered in Haarlem to the person, who can grow a truly black tulip.  Cornelius Van Baerle becomes obsessed with the challenge:

‘These are indeed beautiful bulbs; how smooth they are, how well formed! There is that air of melancholy about them which promises to produce a flower of the colour of ebony.  On their skin one cannot even distinguish the veins with the naked eye.  It is almost sure that not a spot will disfigure the mourning robe of the flower which will owe its existence to me.’7

Over the years since 1850, many growers have taken up this same challenge, but have not, so far, been able to produce a bloom completely without a purple or aubergine tinge – this quest, along with the search for other exotic new colourations and petal shapes, continues. My own concerns are much more prosaic – how can I deter grey squirrels from digging up the bulbs and picking and peeling apart the buds?