An interview with Nora Waddington

Posted by rwatson in Library Special Collections on December 19, 2016

During the 1980s an oral history project was undertaken by the Leicester Oral history Archive.  These interviews are now held by the East Midlands Oral History Archives at the University of Leicester. I am currently working on a project to increase the number of these interviews that are available online (check out the current collection on our website Special Collections Online). The interviews in the collection cover a wide scope of topics and time periods ranging from childhood in the late 19th century to life in war time Britain during the 20th century.

One interview that particularly stuck out to me was with Nora Waddington. Nora studied at University College Leicester as it was then known, from 1924 to 1926, and her interview provides a great insight into what university life was like and how it has grown since the University of Leicester was established in 1921.  As a recent graduate from the University of Leicester, it is very interesting to see the similarities and differences between Nora’s university experience and my own. Listen to the full interview below:

Walking onto the campus today you would expect to see hundreds if not thousands of students, rushing between lectures, queuing at Starbucks or hunting for that perfect book in the library. Whereas if you went back to the university in its early days you would see a completely different picture. As you may already know the university was established on the back of the First World War as a ‘living memorial’ to the sacrifices made by local people during the war. Due to this fact there were only nine students enrolled at the university during its first year. 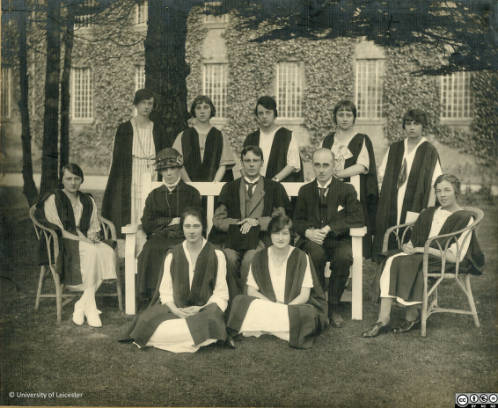 When Nora went to the college in 1924 the number of students had increased from nine, but there were still very few students at the university in comparison with today. So much so that when Dr Robert F Rattray taught Latin there was only one student in the class. Dr Rattray is probably better known for being the first principal of the university, and was in charge of ensuring the smooth running of the college. On top of this, in Nora’s university days, Dr Rattray was also in charge of teaching both English Language and Literature, you can imagine he was a very busy man. 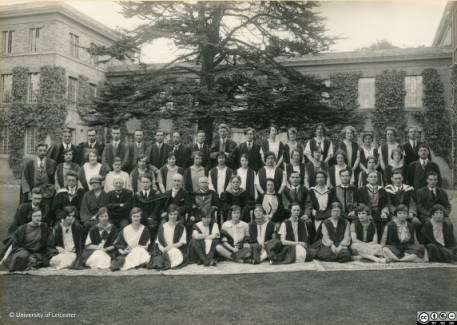 Whilst at university Nora studied English with subsidiary French, but of course English wasn’t the only subject taught at the university at this time, other subjects included Physics, Chemistry, and Mathematics. According to Nora all the subjects, both Science and Art did really well, and the arts side of the university produced some really well known people including Roger Manvell (the first director of the British Film Academy).

One topic that always pops up when you talk about universities are the fees, and instead of the £9,000 tuition fees (along with all the accommodation and other costs) you have to pay today, Nora paid only £20 for the year. OK, this may not be as cheap as it first appears due to economic factors such as inflation. So translating this into today’s money, roughly speaking the fees would be £1,090.97, which I think we can all agree sounds a lot nicer than the £9,000 you pay today.

When most people today start university it also means moving away from home, normally to a different city, to live with a bunch of complete strangers. In Nora’s day, however, the opposite was true and the majority of people lived at home and commuted either by bike or train to the college. Only a few people moved a long way from home and stayed in university accommodation. Instead of this accommodation being in the Oadby Student Village, like it is today, Nora remembers a girl traveling down from the north, who lived in these “fearful little huts” in the Fielding Johnson Building. These huts were originally made for injured solders during the war, so you can imagine it wouldn’t have been as nice as the new modern accommodation available today. On top of this, if you weren’t already aware, the Fielding Johnson Building was originally the Leicestershire and Rutland Lunatic Asylum, and Nora remembers a lecturer taking them to see the padded cells that were still situated in the building at the time. Don’t know about you but that sounds a little creepy. 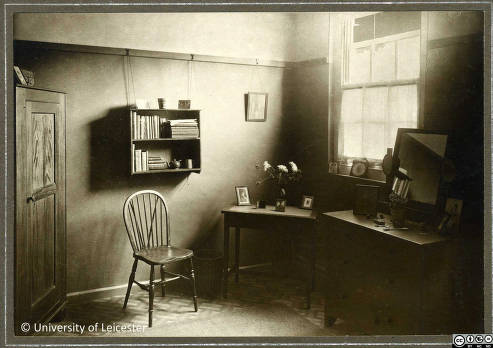 ULA/FG1/3/90: Black and white photograph of a student’s room in College Hostel, for women, situated at the rear of the Fielding Johnson Building. 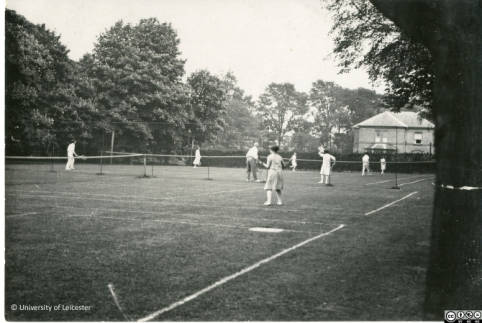 ULA/FG1/3/12: Black and white photograph of students playing tennis on the courts outside College House.

One situation I’m sure students today and Nora have in common is the dilemma between having fun at university and academic work. Nora talks about getting told off at the end of her first year because she was not working hard enough, and I think we all know someone who has been in a similar situation at university today. A huge part of my university life came from joining societies, and it is great to hear about the different groups that the students were attempting to set up during Nora’s time at the University College. Nora talks about trying to set up a badminton club but the roof of the room being too low (I feel she would be quite jealous to see all the sports facilities available today), but this didn’t stop them from playing many different sports from tennis to hockey. Anyone who plays hockey today will probably disagree with this advice but Nora remembers being told just before her first ever hockey game to “just hit it hard through the goal”. This must of worked as she manged to score during the game.

Just like today sport isn’t the only type of society you can get involved in and one society that was very prominent in Nora’s time at university was the Drama Club, of which fellow student C P Snow was a prominent member. But it wasn’t only the students that got involved, the Principal of the time, Dr Robert F Rattray, acted in many plays himself, including Greek plays and modern plays (well maybe not so modern nowadays). 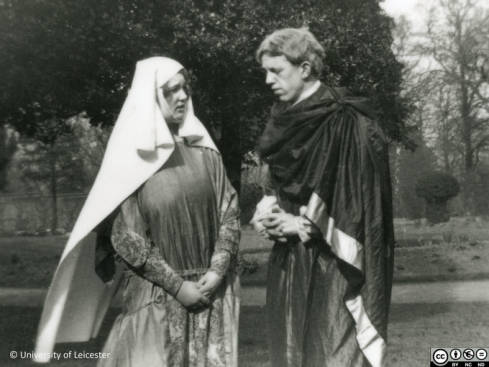 Along with the societies that were being set up, Nora recollects that the university as a whole was very social, with the lecturers holding tea parties throughout the year.  Nora remembers during Christmas in 1924 there was a Christmas tree put up on campus and all the students were given a Christmas present (sadly this would not be possible with the number of students here today). Just like today there were a numbers of nights out in Nora’s day. But it can definitely be said that the nature of these nights out have changed. Instead of going to Lets Disko or Shabang, Nora would attend formal dances and Saturday hops. Whereas now it is very common to see students walking home from a night out in the early hours of the morning, in the 1920s if you wanted to stay out past ten o’clock you would have to sign in and out of a book. On top of this, instead of the drunken hook up that happens on your average student night out today, Nora would have had to have a letter signed by her parents if she would like to attend a dance with a guy. You can imagine how different Shabang would be if that was still the case today.

Overall I think I can safely say that the university has grown considerably over the years but the core essence of the university and it students hasn’t changed much between Nora’s university days and those of students today.

2 responses to “An interview with Nora Waddington”