Desert ‘magick’ and astral bodies – what could they have to do with Special Collections?

Posted by Margaret Maclean in Library Special Collections on August 18, 2016

Our current exhibition, exploring the experiences and attitudes of the British in India from the early 17th century to the turn of the 20th, features a selection of material from the Union Club Library, purchased by the University in 1964, about which I wrote previously.  But it also draws on the collection of Victor Neuburg.  Delving into how we come to have Neuburg’s books uncovers a cast of impossibly colourful characters, so much so that it’s hard to know where to begin. 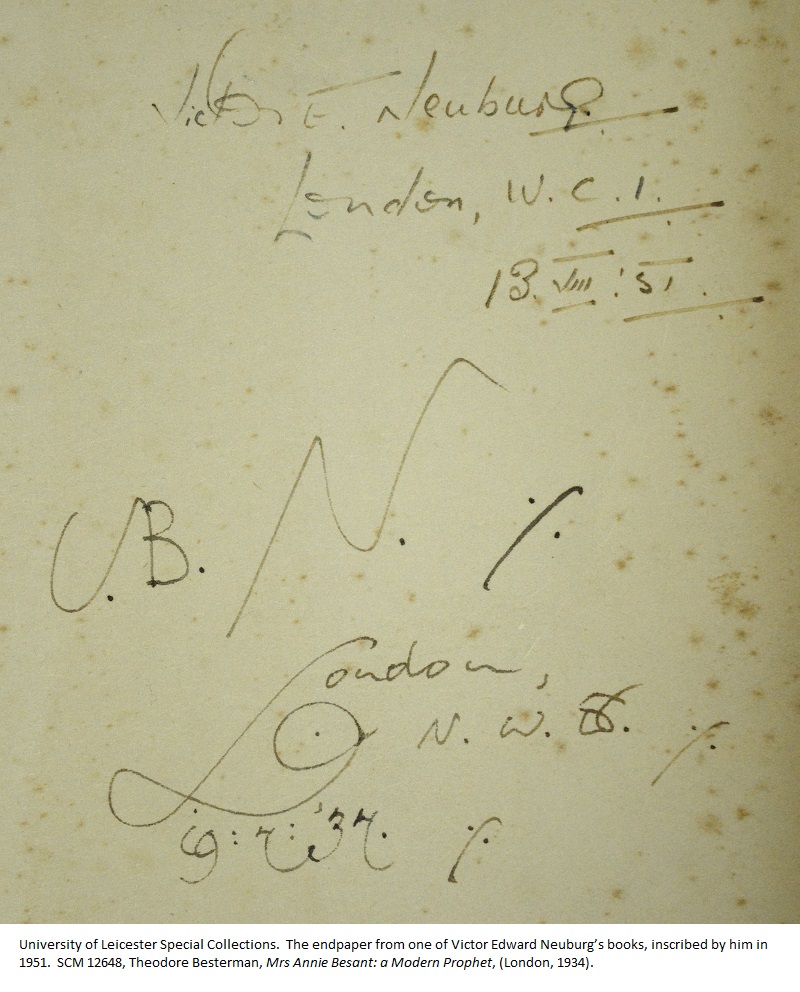 The endpaper from one of Victor Edward Neuburg’s books, inscribed by him in 1951. SCM 12648, Theodore Besterman, Mrs Annie Besant: a Modern Prophet, (London, 1934).

Victor Edward Neuburg (1924-96), from whose collection the books come, was a writer and Senior Lecturer in Librarianship at the Polytechnic of North London. He was awarded a M.Ed. from Leicester in 19681 – this may be why his collection came to us, although I have, so far, not been able to find any information about the circumstances of its acquisition.  His father, Victor Benjamin Neuburg (1883-1940) was anything but a librarian!  The elder Neuburg, a poet and writer on theosophy and occultism, was an intimate of Aleister Crowley.  Crowley, an alumnus of Trinity College Cambridge, approached Neuburg during his time as an undergraduate there.  ‘He was an agnostic, a vegetarian, a mystic, a Tolstoyan, and several other things all at once,’ Crowley wrote of their first meeting.  ‘He endeavoured to express his spiritual state by … refusing to wear a hat … to wash, and to wear trousers.  Whenever addressed, he wriggled convulsively, and his lips, which were three times too large for him … emitted the most extraordinary laugh … to these advantages, he united those of being extraordinarily well read, overflowing with exquisitely subtle humour, and being one of the best natured people that ever trod this planet.  But from the first moment I saw him, I saw far more than this; I read an altogether extraordinary capacity for Magick’2.   Neuburg became Crowley’s chief disciple (no doubt his large private income came in handy too) and accompanied him on a notorious expedition to the Algerian desert to perform extreme ‘magick’.  There’s no space here for a detailed discussion of that expedition, but the flavour of it can perhaps be gauged by the fact that Neuburg had his head shaved, except for two horn-shaped tufts, and allowed Crowley to lead him by a chain attached to a metal collar round his neck.  This, to enhance Crowley’s impact on the Bedouin as a great Magician, who had ‘mastered so fantastic and fearful a genie’3. 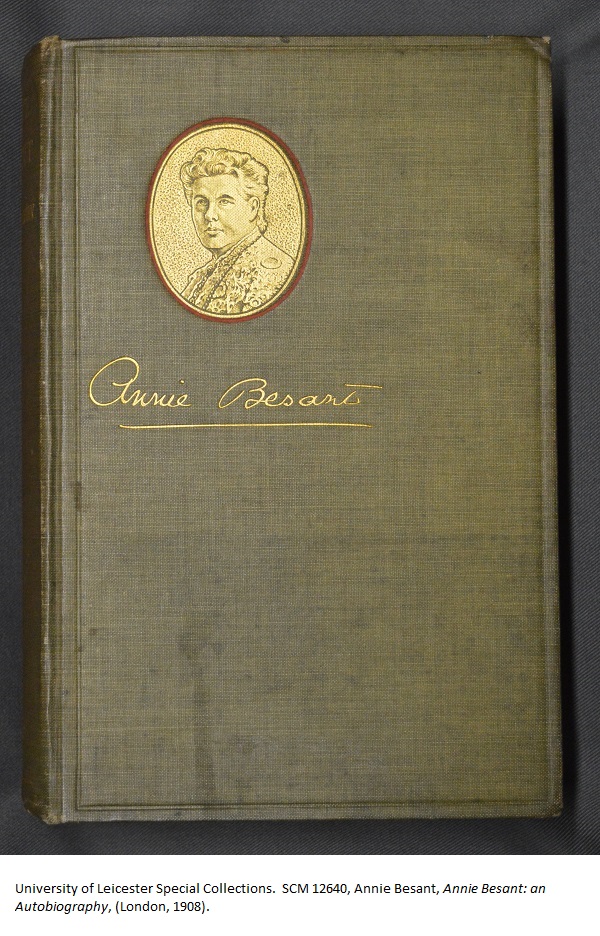 In 1983, Victor Edward wrote Vickybird: a memoir of Victor B. Neuburg by his son, which was used to accompany an exhibition he curated at Islington Central 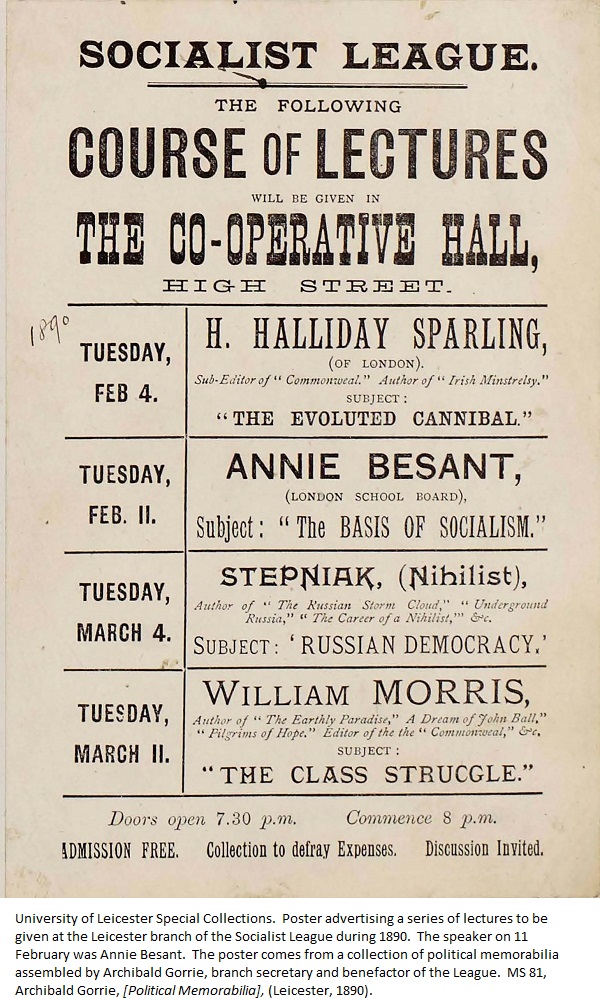 Poster advertising a series of lectures to be given at the Leicester branch of the Socialist League during 1890. The speaker on 11 February was Annie Besant. The poster comes from a collection of political memorabilia assembled by Archibald Gorrie, branch secretary and benefactor of the League. MS 81, Archibald Gorrie, [Political Memorabilia], (Leicester, 1890).

Library.  The contents of the Neuburg Collection reflect Victor’s lifelong interest in the history of secularism and radical freethinking. Which brings us smoothly on to another larger-than-life personality, Annie Besant, subject and author of a number of the books. 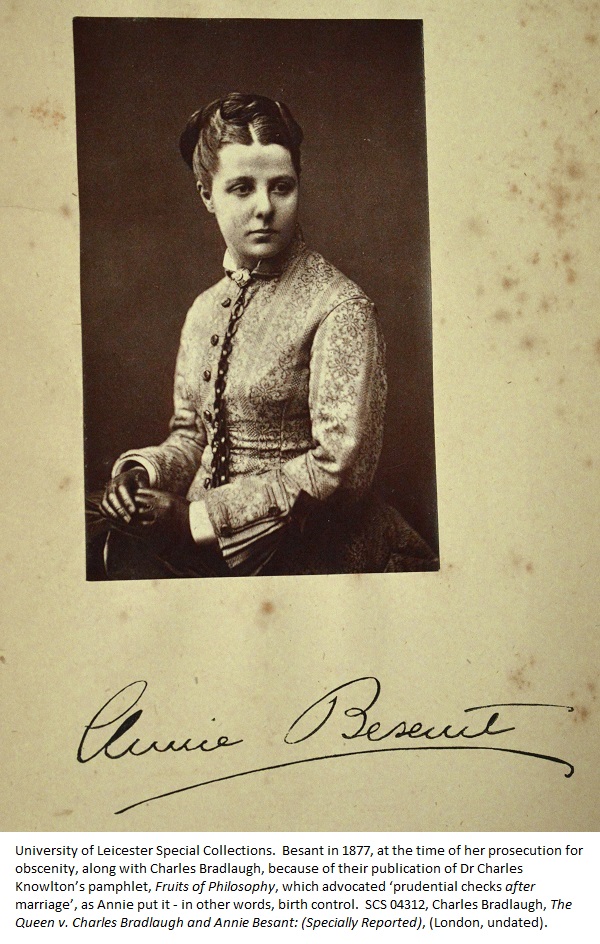 Besant in 1877, at the time of her prosecution for obscenity, along with Charles Bradlaugh, because of their publication of Dr Charles Knowlton’s pamphlet, Fruits of Philosophy, which advocated ‘prudential checks after marriage’, as Annie put it – in other words, birth control. SCS 04312, Charles Bradlaugh, The Queen v. Charles Bradlaugh and Annie Besant: (Specially Reported), (London, undated).

Besant, a truly remarkable woman, self-confessedly (on more than one occasion), ‘impulsive, very hot-tempered, and proud as Lucifer’4, was born Annie Woods in London in 1847 and married an Anglican clergyman, Frank Besant, at the age of only 20.  But she was increasingly drawn to theism, then scepticism and atheism and this led to a legal separation only 6 years later.  Besant went on to embrace a series of causes – first came Freethought and political Radicalism, through her friendship with Charles Bradlaugh, political activist and founder of the National Secular Society, of whom she wrote, ‘all the brightness of my stormy life came to me through him, from his tender thoughtfulness, his ever-ready sympathy, his generous love …’5.  Had they been free to do so, they 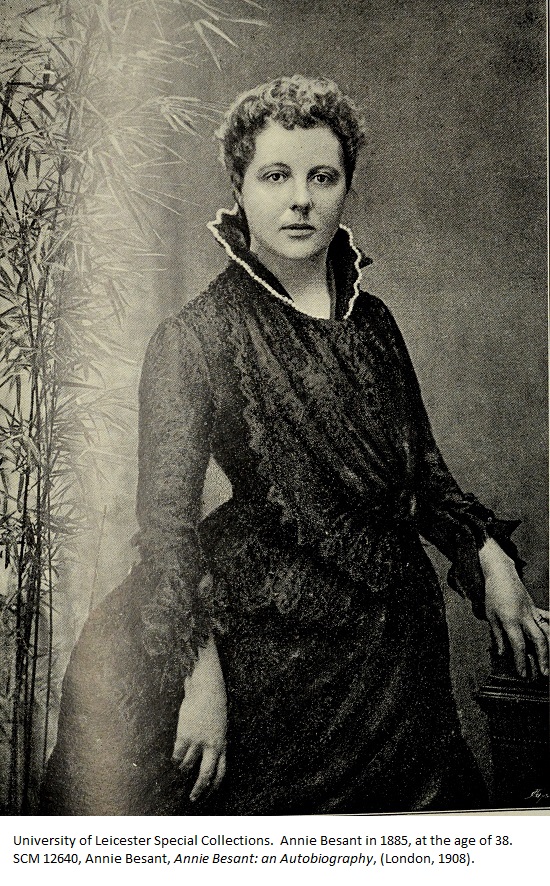 would, in all likelihood, have married.

Besant went on to devote herself to educational and social reform, leading a number of workers’ strikes for better conditions, most famously championing the cause of female workers at the Bryant and May match factory in east London in 1888. Then, in spring 1889 came her most astonishing change of direction.  In her own words, ‘there had been slowly growing up a conviction that my philosophy was not sufficient; that life and mind were other than, more than, I had dreamed’6.  She began to read about Spiritualism, becoming certain that ‘there was some hidden thing, some hidden power’ and ‘desperately determined to find at all hazards what I sought’7.  By chance, she was asked at this point to review The Secret Doctrine by H.P. Blavatsky; the book’s effect on her was like a bombshell.  ‘I was dazzled, blinded by the light in which disjointed facts were seen as parts of a mighty whole, and all my puzzles, riddles, problems, seemed to disappear’7.  She requested a meeting with the author, which was speedily arranged.  From her description of this meeting, the impact of Blavatsky’s mesmeric personality on Annie is clear:

‘[Blavatsky] talked of travels, of various countries, easy brilliant talk, her eyes veiled, her exquisitely moulded fingers rolling cigarettes incessantly … no word of Occultism, nothing mysterious … We rose to go, and for a moment the veil lifted, and two brilliant, piercing eyes met mine … I felt a well-nigh uncontrollable desire to bend down and kiss her, under the compulsion of that yearning voice, those compelling eyes …8’

Inevitably, Besant’s complete conversion to the doctrines of Theosophy, which Blavatsky espoused, followed swiftly. Here is her summing-up of the aims of the Theosophical Society: ‘to found a Universal Brotherhood without distinction of race or creed; to forward the study of Aryan literature and philosophy; to investigate unexplained laws of nature and the physical powers latent in man’9.  As she had done in every cause she championed, Besant went on to become a leader of the Society.  With their belief in reincarnation, Theosophists saw India as the source of all true religion.  Besant, who first visited India in 1893, made her home there.  She believed that she had been a Hindu in a previous incarnation and, soon after her arrival, bathed in the Ganges.  By 1915, she was able to write: ‘For nearly two and twenty years I have lived among Indians, not as a foreigner but as one of themselves, Hindu in all save the outer ceremonies for which my white skin disqualifies me, living in Indian fashion, feeling with Indian feelings …’10 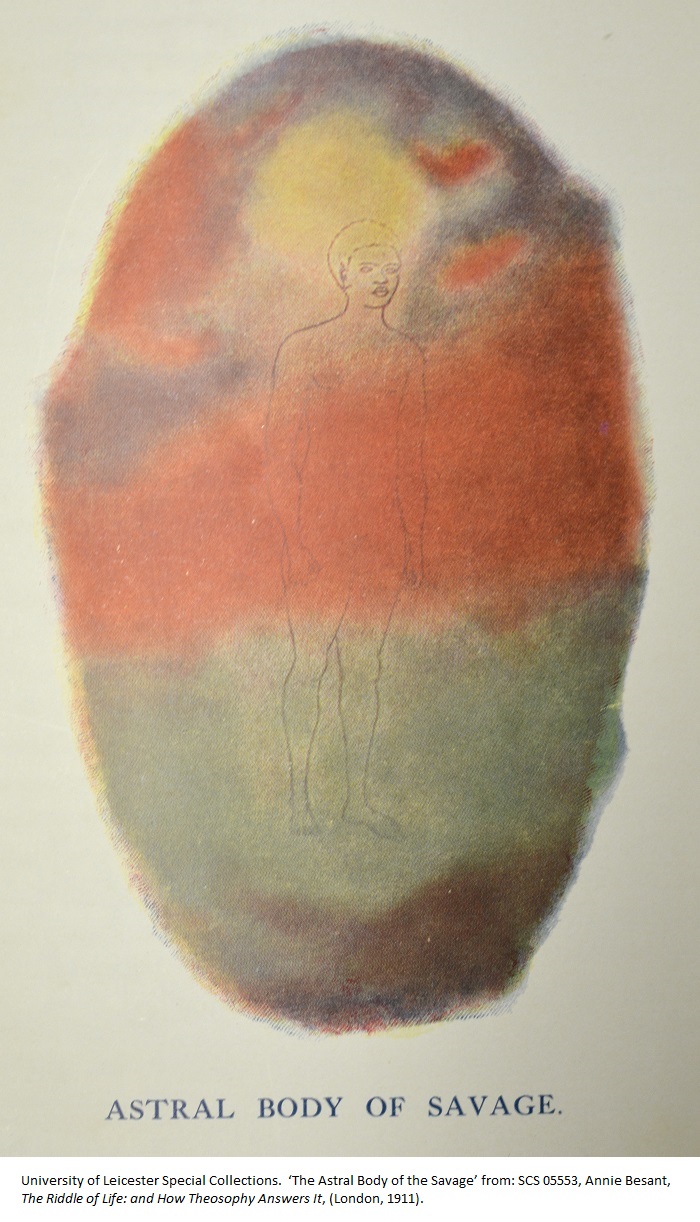 Reading Besant’s autobiography (which sadly only covers the first 44 years of her life, up to her conversion to Theosophy), you can’t help but feel that she would have been difficult to live with, but neither can you help being charmed by her candour and, above all, her sheer ‘heart’. And, in spite of the extraordinary journey (literal, as well as political and spiritual) of her life, it still seems that ‘you can’t take the girl out of the woman’.  She describes how, in February 1875, she was trapped in a train compartment with a drunken man, on his way home from the greyhound racing.  (At that time, there was no connecting corridor on trains, so you couldn’t move from the compartment between stations.)  ‘Never before nor since have I felt so thoroughly frightened11’, she writes, an astounding comment, considering all the amazing things she went on to do – but a revealing one.

Besant died in India in September 1933, having been leader of the Theosophical Society for 25 years. A portion of her ashes was buried in the Garden of Remembrance at Adyar, the remainder was sprinkled in the Ganges at Varanasi.

The exhibition runs until 30 September 2016 in the basement of the David Wilson Library. Entry to the library is free but controlled, so if you are not a student or member of University staff, please ask to be let through the barrier. Details of staffed opening hours are available on the library website.

3 responses to “Desert ‘magick’ and astral bodies – what could they have to do with Special Collections?”