Glimpses of the young David Attenborough in the University Archives

Posted by Simon Dixon in Library Special Collections on May 9, 2016

It’s well known that David and Richard Attenborough, along with their brother John, spent part of their early lives living on the campus of what was then University College, Leicester. There are stories of Richard locking David in one of the padded cells that remained in the Fielding Johnson Building from when it was a Victorian lunatic asylum. It’s also recorded that when the Zoology Department was in need of newts, David went pond-dipping and sold what he caught to the College for three pence each. 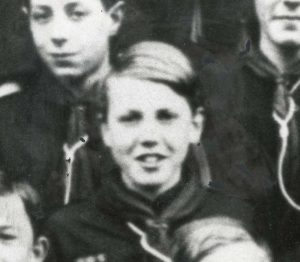 When the Attenborough boys were living on campus, of course, no one could have predicted what they would go on to achieve. Therefore, while the University Archives contain a great deal of information about their father, Frederick Attenborough, we have only a few fleeting glimpses of his sons. David is mentioned in a handful of his father’s letters dating from 1941-1944, which can now be read on Special Collections Online.

The first letter was sent in August 1941 to a Lieutenant Colonel Neame of Collycroft House, Ashbourne. In it, Frederick acknowledges receipt of three geological specimens: one of shale and two of quartz:

I cannot tell you just where they have come from and I doubt whether it is possible to do so since they are specimens of rocks which are fairly widely distributed. My son [David], however, is very glad to have them; he has labelled them and added them to his collection. (University of Leicester Archives, ULA/AD/A8/1/5iii)

A year later, Attenborough senior was writing to the Secretaries of the Geological Society of London. The exact subject of the letter is not clear, but it refers to an education scheme about which he had received correspondence. Attenborough writes that:

I am personally interested because my son, who is now sixteen, hopes to become a Geologist and he will be largely thrown on his own resources in preparing himself for a University Scholarship. (ULA/AD/A8/1/D5)

The next letter, from 14 March 1944, is addressed to Captain Clifford Smith of the AA Battery in the Home Guard, in which Sir David served during the Second World War. On this occasion Frederick withholds his consent for David to enrol in the unit because, “he is to take the Higher Schools Certificate Examination shortly and his future plans are uncertain”. It is possible, he continues, that David may be coming to University College Leicester to take a degree course, concluding that, “I shall ask my son to delay making up his mind until the future is a little clearer”.

The final letter we have mentioning David was sent in September 1944 to Professor (Henry) Swinnerton of University College, Nottingham. Here, we learn more of David’s career aims and plans for his education:

The following year David was successful in winning a scholarship to Clare College, Cambridge. He continued to visit his father in Leicester, until Frederick’s retirement in 1951. However, he has retained a special connection with the University, returning on numerous occasions, most recently earlier this year to open the new Attenborough Arts Centre extension. While these letters only show fleeting glimpses of his early life here, they provide an insight into his early interests and the role of his father in supporting his son’s career aspirations.