Frost Fairs on the Thames

Posted by Margaret Maclean in Library Special Collections on December 1, 2015 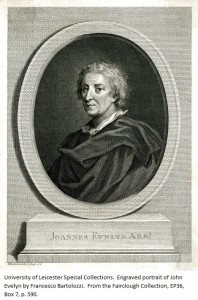 ‘The weather continuing intolerably severe,’ John Evelyn wrote on 1 January 1684, ‘streetes of booths were set upon the Thames; the aire was so very cold and thick’.*  This was by no means the first time the Thames had frozen over.  The bed of the river was much wider than today, so ice tended to form near the banks.  The narrow arches and huge piers of Old London Bridge encouraged ice to mass and form a barrier.  With continuing cold weather, gaps between the ice would fill in.

By 9 January, the ice was ‘now become so thick as to beare not onely streets of booths, in which they roasted meate, and had divers shops of wares, quite acrosse as in a towne, but coaches, carts, and horses, passed over’.*  So Evelyn walked across the Thames from Westminster Stairs to Lambeth, on his way to dine with the Archbishop, and back from Lambeth Stairs to the horse ferry afterwards. 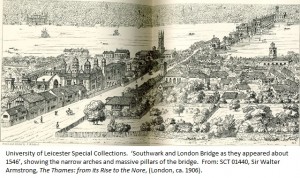 ‘Southwark and London Bridge, as they appeared about 1546’, showing the narrow arches and massive pillars of the bridge. From: SCT 01440, Sir Walter Armstrong, ‘The Thames: from its Rise to the Nore’, (London, c. 1906).

The first recorded Frost Fair on the Thames was in 1564-5, although we have evidence that large stretches 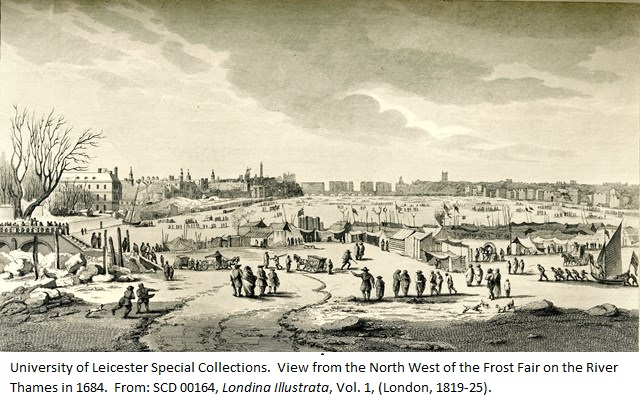 of the river were frozen over on several occasions before that – in 1515 the ice was strong enough to bear carriages between Lambeth and Westminster.  Raphael Holinshed describes the festivities of 1564:

‘On New Year’s even, people went over and alongst the Thames on the ise, from London Bridge to Westminster.  Some plaied at the football as boldlie there as if it had been on the drie land … and the people, both men and women, went on the Thames in greater numbers than in anie street of the Citie of London.’+

Frost Fairs were not confined to the Thames.  In November 1607, the River Ouse at York was ‘wholly frozen 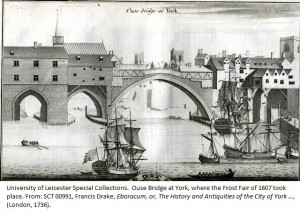 up, so hard that you might have passed with cart and carriage as well as upon firm ground’.  Francis Drake tells us that, ‘Many sports were practised on the ice; as shooting at eleven score … bowling, playing at football, cudgels &c.  And a horse-race was run … under the great arch of the bridge …’**

With his passion for horticulture, and most especially for trees, one of Evelyn’s first concerns in 1684 was for the effects of the severe cold both on the countryside and on his own gardens at Sayes Court:

‘The fowles, fish and birds, and all our exotiq plants and greenes universally perishing … many parkes of deer were destroyed, and all sorts of fuell so deare that there were greate contributions to preserve the poore alive … I went to Says Court to see how the frost had dealt with my garden, where I found many of the greenes and rare plantes utterly destroyed.  The oranges and mirtills very sick, the rosemary and laurels dead to all appearance, but ye cypress likely to indure it.’** 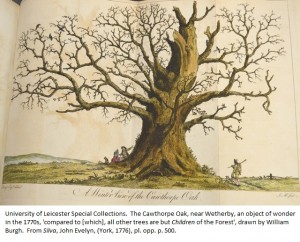 Twenty years earlier, Evelyn had published Sylva, a ‘Discourse Concerning Forest Trees’, his most successful book.  Our current exhibition in the basement of the Library salutes his contribution to the science and practice of arboriculture – and to his other many and varied achievements.  The exhibition runs until 29 January 2016. Entry to the library is free but controlled, so if you are not a student or member of University staff, please ask to be let through the barrier. Details of staffed opening hours are available on the library website.

One response to “Frost Fairs on the Thames”