Posted by Simon Dixon in Library Special Collections on May 7, 2015

Our look back at past elections in Special Collections is rounded off today with a gallery of from an impressive volume of East Derbyshire Election Cartoons, 1868. The book was printed and published by Richard John Smithson of Chesterfield.

Shown here are 21 political cartoons. Numbers 1-18 (Liberal Cartoons) were drawn by J. Priestman Atkinson, who worked for Punch. Two of the three Conservative Cartoons (19-20) are signed by Palmer & Edmunds Litho.”, while the third is unsigned. The election was the first to be fought following the 1867 Reform Act which gave the vote to occupiers in the boroughs (people who rented properties rather than owning them). The contest for East Derbyshire was a hard fought affair, with the Liberal candidates, Francis Egerton and Henry Strutt, victorious over their Conservative opponents by narrow margins. The volume of cartoons provides an insight into how elections were fought 150 years ago. It is apparently very rare: only the University of Leicester’s copy is listed on Copac. One explanation for its scarcity may be the fact that the publisher, Smithson, was declared bankrupt shortly after it was published (pdf).

According to the Preface, ‘During the Election the following Cartoons appeared week by week, and excited great interest on both sides. As works of art they may be left to speak for themselves; but, unless some key be given, “Times effacing finger” will soon prevent the identification of the persons delineated, and a thus deprive the drawings of much of their significance. They are therefore here collected, so as to admit of any written memoranda in regard to each which the possessors of the collection may deem desirable’. Each cartoon is interleaved with a blank page, so it seems that Smithson’s intention was for his customers to use them as a scrapbook for other ephemera from the election. The Special Collections copy contains no such material, but it would be interesting to know of other surviving copies that may have been used as intended. 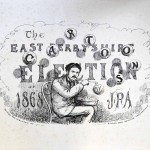 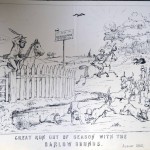 No. 1. Great run out of season with the Barlow hounds. 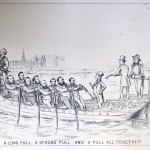 No. 2. A long pull, a strong pull, and a pull all-together 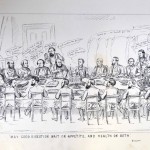 No. 3. May good digestion wait on appetite, and health on both 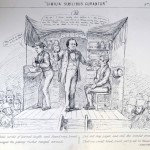 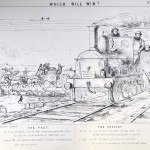 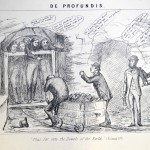 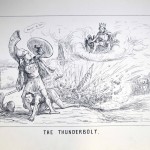 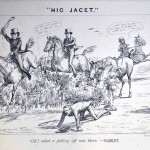 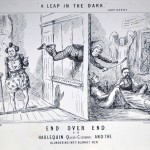 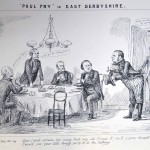 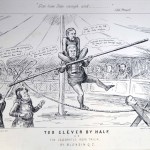 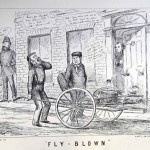 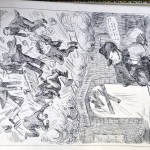 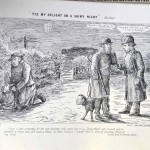 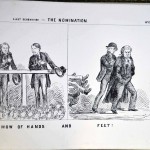 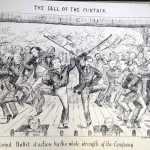 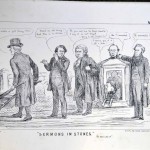 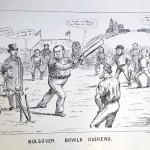 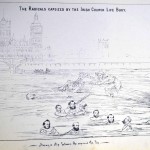 No. 19. The Radicals capsized by the Irish church life buoy 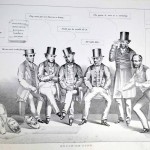