Seditious works in Special Collections: the case of William Prynne (1600-1669)

Posted by Simon Dixon in Library Special Collections on October 10, 2014 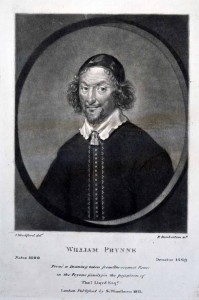 One of our current projects in Special Collections is to identify material that could form the basis for undergraduate and postgraduate dissertations. To do this I’m getting the opportunity do one of the things that I enjoy most about my job: exploring our collections. Despite having worked here for two years, there’s still much that I don’t know about the books and archives that we look after, and it’s always exciting to make new discoveries.

I realised this morning that we have a very impressive collection of books and pamphlets by the 17th century puritan, William Prynne. Prynne was born near Bath, Somerset, in 1600. He studied at Oriel College and Lincoln’s Inn, and was called to the bar in 1628.  In 1626 he published the first of his 200 books and pamphlets, The Perpetuitie of a Regenerate Man’s Estate. Like many of Prynne’s works, this was a fervent attack on Arminianism and resulted in him being summoned to court to defend himself. 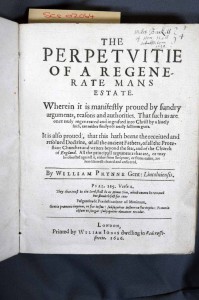 The Library holds a copy of this work, part of the bequest of Caleb Robjohns, referred to in an earlier blog post. Among Robjohns’s extraordinary collection of Bibles, reformation literature and other early modern religious works, are nearly 100 publications by Prynne, representing around half of his published output.

In the years that followed the publication of The Perpetuitie of a Regenerate Man’s Estate, Prynne authored a succession of works attacking Arminianism and, implicitly, the regime of Charles I. On one occasion he came close to blaming Charles for the drunken behaviour of his subjects, and on another (The Unloveliness of Lovelocks, 1628) he attacked the fashionable male hairstyle sported by the King. These early works drew both Prynne and his publisher, Michale Sparke, to the attention of the authorities.

In 1633 Prynne published Histrio-Mastrix. The Players Scourge, or, Actors Tragedie, an attack on stage plays extending to over 1000 pages. The pamphlet, which denounced female actors, appeared at the same time as Queen Henrietta Maria was participating in a court masque. It was therefore seen as an attack on the Queen, as well as the king’s magistrates and household. 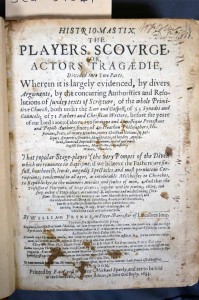 Prynne was found guilty of sedition by the Star Chamber, fined £5000, sentenced to life imprisonment and ordered to have his ears cut off as punishment. From his incarceration in the Tower of London he continued to smuggle out pamphlets and appeared again before the Star Chamber in 1637. The punishment this time was even more brutal. His ears, partly cropped in 1633, were to be fully removed and he was to be branded ‘S.L.’ for seditious libeller.

The parliamentary victory over Charles I resulted in Prynne’s release from prison, and subsequent appointment to government office. He was, however, imprisoned again under Cromwell due to his opposition to the execution of Charles. Following the Restoration of Charles II he returned to parliament and was appointed keeper of the records in the Tower of London.

The Library’s collection of Prynne’s works offers great potential for undergraduate and postgraduate History dissertations on Puritanism, print culture, the Civil Wars and Restoration period. In addition to the pamphlet collection, we hold a number of engraved portraits of Prynne among the Fairclough Collection.

Works by William Prynne, and a wide range of other material from sixteenth and seventeenth centuries can be found by searching the Special Collections section of the Library catalogue. Alternatively, email specialcollections@le.ac.uk for more information about using our collections.