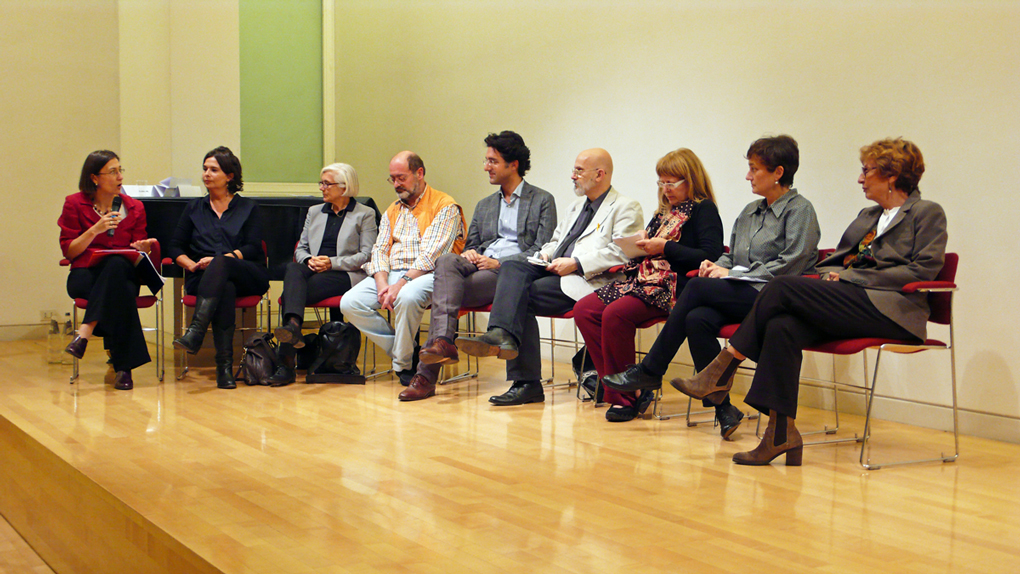 Speakers at the Conference (apart from Prof. Quintavalle). Photograph by Silvia Stucky.

Conference on Luigi Ghirri at the The British School at Rome (http://www.bsr.ac.uk/), 9 October 2013.

The first event of the British Academy-funded project was a conference entitled ‘How to think in images? Luigi Ghirri and photography’ / ‘Come pensare per immagini? Luigi Ghirri e la fotografia’, which was held at The British School at Rome on Wednesday 9 October 2013 (9.30-19.30). The conference and project are also supported by the School of Modern Languages, University of Leicester, and by the British School at Rome.

The conference in Rome was held under the patronage of the Society for Italian Studies, the Regional Government of Emilia Romagna, the Municipality of Reggio Emilia, the Panizzi Library in Reggio Emilia, and in collaboration with MAXXI, the Italian national museum of Twenty-First Century art in Rome. The conference was organised to coincide with the major retrospective of Ghirri’s work at MAXXI (24 April–27 Oct 2013): http://www.fondazionemaxxi.it/2012/12/14/luigi-ghirri-pensare-per-immagini/

The conference offered a novel appraisal of the multifaceted work of Luigi Ghirri (1943-1992). Bringing together several of the main Italian scholars, curators, and artists-photographers whose investigation and practice have long been in a dialogue with Ghirri’s photography, it contextualized his work within the debate on Italian photography, art and aesthetics, and beyond, and established new links between his work and that of his contemporaries in Italy and abroad. By adopting an interdisciplinary approach, the conference gave a significant contribution to assessing Ghirri’s role in redefining photography as part of contemporary artistic practice and visual culture, and his bringing to the fore issues of place and landscape in postmodern Italy.

Professor Christopher Smith, Director of The British School at Rome, opened the proceedings by underlining the interdisciplinary nature of Luigi Ghirri’s work and his attention to literature. The second inaugural address was given by Pippo Ciorra, Senior Curator of MAXXI Architettura, who welcomed the project and its first conference as a much-needed opportunity for scholarly discussion on Ghirri.

The first session, chaired by Jacopo Benci, opened with a paper by Francesca Fabiani (Curator of the Photography Collection, MAXXI Architettura) entitled ‘Lo sguardo che cancella l’abitudine: Luigi Ghirri e il paesaggio’ / ‘The gaze that erases habit: Luigi Ghirri and landscape’. As one of the curators of the MAXXI exhibition on Ghirri, Fabiani asserted the need to give Ghirri’s work the attention and recognition it deserves. Her paper offered an investigation of Ghirri’s photography of place and landscape from his early work to Viaggio in Italia and Esplorazioni sulla via Emilia, two seminal interdisciplinary projects for which he acted as a catalyst, bringing together many photographers, writers, artists, as well as architects, geographers and economers.

Giuliano Sergio, independent scholar and co-curator of the MAXXI exhibition, presented a paper on ‘Avanguardia e architettura: due radici di Luigi Ghirri’ / ‘Avant-garde and architecture: two roots of Luigi Ghirri’. Sergio offered a detailed analysis of the context and critical debate on art in Italy in the 1960s and 1970s, with which Ghirri was familiar through his collaboration with conceptual artists in Modena (including Cremaschi, Guerzoni, Vaccari, Della Casa, Parmiggiani) and through his knowledge of the works of artists such as Paolini, Kounellis, Mulas, Ruscha, with which his art established an original dialogue.

In the second session, chaired by Marina Spunta, Laura Gasparini – Curator of the ‘Fototeca Biblioteca Panizzi’ in Reggio Emilia and co-curator of the MAXXI exhibition – spoke about ‘Luigi Ghirri tra ricerca e attività curatoriale’ / ‘Luigi Ghirri between research and curatorial work’. Her paper examined Ghirri’s role as curator and theorist, and his ability to engage in dialogue and act as a catalyst for many artists, scholars and institutions in Emilia Romagna and beyond.

With a presentation entitled ‘Il cielo e il mare: Luigi Ghirri e Pino Pascali’ / ‘The sky and the sea: Luigi Ghirri and Pino Pascali’, critic Anna D’Elia (Academy of Fine Arts, Bari) drew a new parallel between the work of Ghirri and that of Pino Pascali (1936-1968), comparing Ghirri’s series Infinito / Infinite (1974), comprising 365 photographs of the sky, taken every day over a year, with Pascali’s 32 mq. di mare circa / Approx. 32 square meters of sea (1967), a series of 30 square containers full of water. D’Elia argued that with these works Ghirri and Pascali addressed the question of how to capture infinity and to render temporality, and that both sought to redress the role of the artist and the relations between different arts.

The first session of the afternoon, chaired by Francesca Fabiani, opened with a contribution by Vittore Fossati, one of the photographers who worked with Ghirri in the 1980s and who has continued an investigation of place and landscape to-date; its title was ‘L’otto rovesciato. Appunti per un’idea di ‘infinito’ nell’opera di Luigi Ghirri’ / ‘The tipped 8. Notes for an idea of ‘infinity’ in Luigi Ghirri’s work’. By analyzing a few evocative images Fossati reflected on the importance of the notion and the symbol of the infinite in Ghirri’s work.

Curator Elena Re gave a paper entitled ‘Il progetto nell’opera di Luigi Ghirri’ / ‘The project in Luigi Ghirri’s work’. Her paper explored Luigi Ghirri’s work as an overall project that bridged the early conceptual period of the 1970s with the ‘landscape epoch’ of the 1980s. Re showed that Ghirri’s experimentation with photography was informed by a coherent thought that sought to put forward his vision of the world. His art drew on great dedication and craftmanship, which he saw as a means of accessing his subject matter more deeply. In her paper Elena Re argued that Ghirri was interested in the materiality of art and in the manual work that surrounds each creative process. He enjoyed making maquettes of his work and mounting his photographs on cards or in albums in order to create his own archive – a reservoir of images through which he constructed his series. Furthermore, his curiosity and love for things was such to drive him to collect a great number of objects, many of which then became part of his photographic work, giving rise to new projects.

Photography historian and author of the book Mondi infiniti di Luigi Ghirri, Ennery Taramelli (Academy of Fine Arts, Rome) with her paper on ‘‘Luoghi non comuni’ di Luigi Ghirri e Stephen Shore’ / ‘Luigi Ghirri’s and Stephen Shore’s ‘Uncommon places’’ offered a contrastive analysis of a number of written and visual texts by Ghirri and Shore, focusing in particular on Kodachrome and on American Surfaces. Her presentation highlighted the innovative nature of Ghirri’s photography from the early 1970s, suggesting that it was in many ways consonant and parallel to the research on place and landscape carried out by Shore, and that both Ghirri and Shore were interested in the photography of conceptual artists such as Bernd and Hilla Becher, Ed Ruscha, Franco Vaccari and Franco Guerzoni.

The final session was chaired by Laura Gasparini. In ‘Luigi Ghirri, l’‘ascolto’ dei luoghi e il dialogo con gli scrittori’ / ‘Luigi Ghirri, listening to places in dialogue with the writers’ Marina Spunta explored the consonance between Ghirri’s work and that of a group of writers who worked with him in the 1980s, in particular Gianni Celati and Giorgio Messori. By focusing on the metaphor of ‘listening’ to the landscape, she argued that their individual and collaborative work contributed to recovering a broader approach to landscape that sought to establish an affective connection to places while preserving their vagueness, and to posit the aesthetic qualities of places what-so-ever, an approach recently embraced by aesthetic theories of landscape such as those of Paolo D’Angelo.

In his paper, ‘Towards an iconology of Luigi Ghirri’, artist-photographer Jacopo Benci presented a detailed analysis of the iconology of Ghirri’s early works (circa 1972-1981) and examined how Ghirri reflected on, and borrowed elements from the works and theories of artists such as De Chirico, Magritte, Paolini, or authors like Frances Yates and Christian Norberg-Schulz.

Arturo Carlo Quintavalle, formerly professor of art history at the University of Parma, and for a long time Director of the CSAC (‘Centro Studi e Archivio della Comunicazione’), gave a paper entitled ‘Luigi Ghirri e la ricerca concettuale in Italia e negli Stati Uniti’ / ‘Luigi Ghirri and conceptualism in Italy and in the United States’. Quintavalle highlighted the breadth of Ghirri’s cultural references, from philosophy and phenomenology (in particular Merleau-Ponty) to contemporary art, and presented him as a complex protagonist of the artistic debate of the 1970s and 1980s. He argued that the roots of Ghirri’s work are to be found in the debate of Italian and American conceptualism and urged scholars to investigate in detail both Ghirri’s reading of literary and theoretical texts and his artistic interests, which spanned from Renaissance painters (such as Piero della Francesca, Sassetta, Beato Angelico) to modern and contemporary artists.

I am Senior Lecturer in Italian at the School of Modern Languages, University of Leicester. I have a first degree in Modern Languages and Literature (Bologna), an MPhil in Applied Linguistics (Exeter) and a PhD in Italian Studies (Birmingham). My research interests include Contemporary Italian Literature; Cultural Studies; Space, Place and Landscape Studies; Orality and Vocality in Literature; Postwar Italian Cinema and Documentary; Visual Studies; Literature and Photography (especially the work of Luigi Ghirri). I currently teach various undergraduate modules in contemporary Italian fiction and photography, cinema, language and linguistics and contribute to a module on the MA in Film and Film Cultures. I have supervised two successful PhD students in Italian literature and cinema.