Posted by apatel in Leicester Learning Institute: Enhancing learning and teaching on May 21, 2020 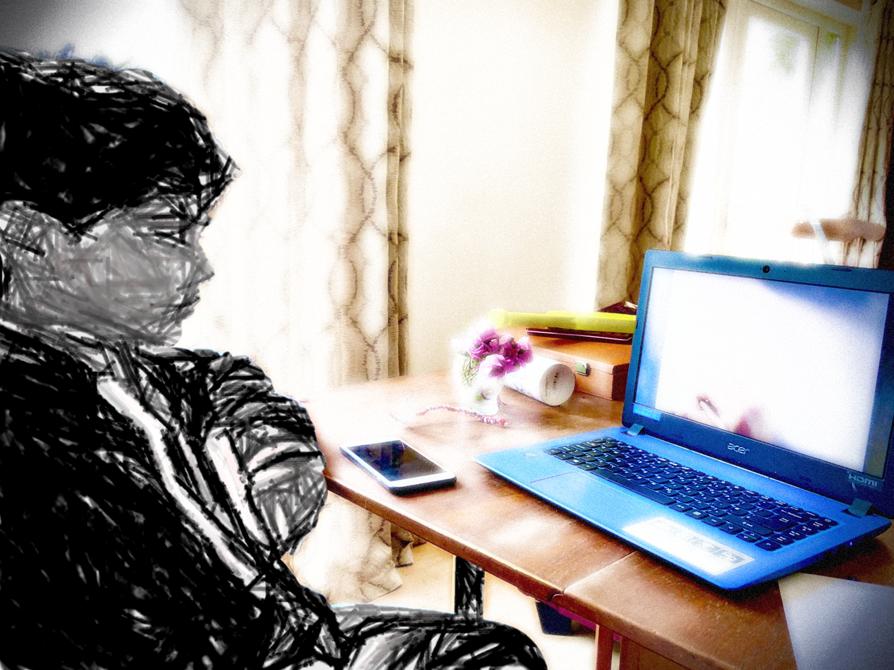 An observation of a child taking part in a Year 7 Live-streamed Science class, during the Covid-19 crisis.

Okay, so I do have some bias to be aware of. I find it hard to engage with didactic live-streamed lessons, and feel there must be some better way of learning. I’m a big fan of learning by doing and experiential learning. Show don’t tell. Also, my son is coming to his teenage years, and has always made a point of objecting to anything related to learning (despite, ultimately still doing it and doing it well). Lastly, the mere situation of me sitting next to him, with my notepad, and sharing a laugh when the teacher obsesses with mantles and magma, will change the learning environment. But it amuses me to think about this from a lesson-observation perspective – what is the learner doing?

I think I’ll refer to him as K, in reference to Joseph K in the Trial, who also had the pleasure of going through a major and contradictory change in reality.

K has dragged himself out of bed, and logged in to his laptop to view the lesson. He’s still in his Pyjamas and its 10am, but he’s been motivated enough to choose to engage with this without me badgering him. However, he’s probably not awake enough to fully engage with the material. He’s at the dining room table, and in relative peace and quiet – apart from the scratching of my pen on the notepad.

The lesson is being delivered by a senior teacher at one of a group of academy schools. It’s a year 7 science class on the ‘rock cycle’, and probably targets around a thousand students. No idea how many would actually attend. The teacher starts off with a single diagram of the rock cycle, and a paragraph of text. For some reason he reads the paragraph to us. He has a wonderful voice, full of passion and emphasis and enthusiasm, but I still don’t know why he would read a paragraph that everyone can see. K responds with ‘this is so boring’. 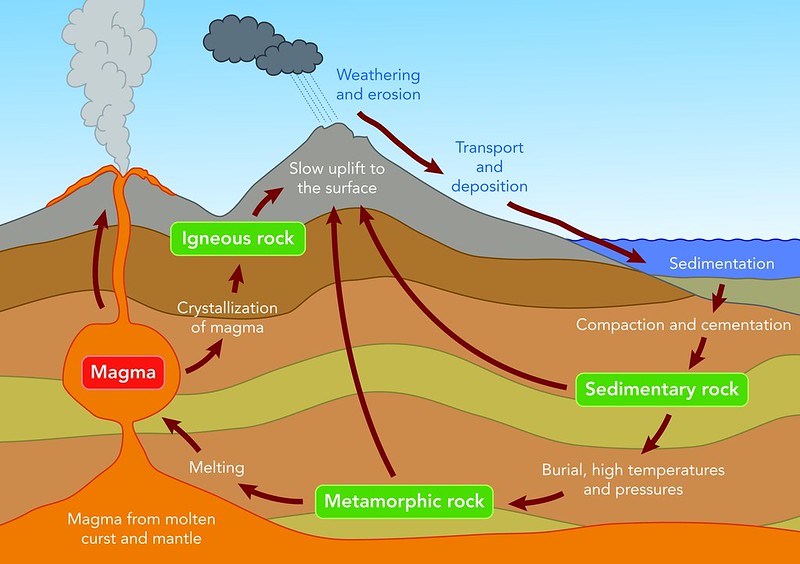 The teacher then explains a bit about the rationale of learning – we’re reviewing processes they’ve seen before, memorising through repetition, but also connecting these processes together. The teacher explains that this form of ‘elaboration’ is how we really learn things long term.

The teacher explains the diagram, starting with weathering, how rocks are broken down, and go through compaction and cementation to become sedimentary rocks.

The teacher takes a moment to complain about the diagram not showing the mantle, and how our diagrams will be much better, because we have made them. K and I chuckle that the diagram *does* show the mantle, but the teacher hasn’t noticed. Teacher carries on explaining the rock cycle over about 10 minutes. K is resting his head on the table and pretending to be asleep.

Now, the teacher switches to a visualiser showing an overhead shot of his plain A4 paper and his hands holding a pen. K is chuffed that he has the same pen. K gets a text from his friend ‘Finally, something fun’.

The teacher explains very clearly, in an animated and engaging voice, that we will all now draw the rock cycle from memory. I suspect he is an actor. K responds with non-compliance. After about a minute of persuasion from me, he takes up his pen and draws the diagram. However, he doesn’t bother labelling it.

K’s 7 year old sister S appears. She wants to put the TV on in the open plan dining room/living room. I say ‘put the volume on low so K can do his lesson’. She says there’s no point, as she won’t be able to hear it, starts to cry and demand I give her something to do. Apparently ‘play upstairs or outside for 10 minutes’ isn’t specific enough. Neither is go on the iPad. I start to count, and by ‘four-and-a-half’ she relents and sits on the settee and plays.

I suspect K hasn’t been able to concentrate on what the teacher is talking about for the last 5 minutes. I notice I’m now feeling stressed, and have to make a conscious effort to regain my motivation for the rock cycle.

The teacher checks his phone under the visualiser for the time. Potential GDPR breach is averted by use of finger-print recognition.

Now, the teacher asks students to turn over their piece of paper and draw the rock cycle from memory. K refuses – ‘I don’t really see the point – I did it once already’. Plus he didn’t put any labels on his half-arsed diagram, so would find it difficult.

The teacher chats a little, whilst hoping students are doing another diagram, but has no way of knowing. He suggests that photos can be emailed to him, and he will give students a house point in reward. K is not inspired. Teacher then says he will finish with a song, although his daughter has advised him against it. I wait with some interest for the song, and suspect the teacher is an amateur performer. K’s friend texts ‘cringe’.

In the last couple of minutes, the sound of an acoustic guitar emerges from the laptop speaker, and the teacher launches into an excellent version of a rock-cycle themed parody of ‘Born this way’. I’m extremely impressed, and sing along. K claims its awful, but I can tell he likes it.

Lesson over – 36 min. Now he’s on to his maths questions, which he seems to prefer as he can go at his own pace.

So what does this mean?

No matter how well narrated (and this guy was good), listening to a voice reading text or talking through a static diagram requires buy-in from students. It’s easy for them to not engage, as no one will know. And the other question is why do this yourself – could you direct the students to a pre-existing, high production-value video instead. Show don’t tell. This would free-up time for social learning and feedback.  A kind of flipped classroom that enables you to use the live-time as a time for hearing student solutions (see below) and giving direct feedback.

This may require development of new approaches to facilitation of student discussion. Teaching through Socratic questioning – sequences of questions that increasingly challenge students to engage with disciplinary knowledge. A move to guided experiential learning, where the student does the work, and the teacher prompts and corrects during discursive interactions.

But what tools can we use?

I suspect many students, at least to start with, will be reticent with sharing their thought processes with groups, particularly larger groups. This kind of interacting would need careful scaffolding – perhaps starting with paired discussions, that feed into small groups, and then a complementary large group discussion.

Or we can embrace some of the less threatening text-chat options that are available to use in BB collaborate or Teams, as this lets students think and reflect on what they’re written before pressing send.

Other options are provided by the wonderful world of Tophat, audience voting. Not only multiple choice, true or false, but dynamic word clouds. Cas Kramer has an inspired Biological Sciences calculation activity, where students attempt on their own, with many different incorrect answers, and he gives progressive clues that eventually lead students to converging on a single answer and single way of performing the calculation. Socratic questioning in action, perhaps?

How do we get buy in?

I think it’s about *purpose*. Students need a reason to engage mentally. Perhaps this is the ‘why the rock cycle is important to know’ – where do diamonds come from? Where might you find fossils? Or maybe its problem-based learning:

‘Ok, guys, a watch company has come to us, a team of geologists, for advice on where they can find Quartz crystals for use as crystal oscillators to keep time in their watches. We’re going to use the rock cycle to work out where we should start looking for Quartz crystals.’

There’s a rich literature around problem-based learning in Higher Education, which may be very valuable in this context.

Our new challenging world of HE will take time and exploration to work out what will work for both face-to-face and distance learning students, but finding out how students are engaging with our teaching is central to this.

Next lesson is English on Monday.

Posted in Digital | Leave a response