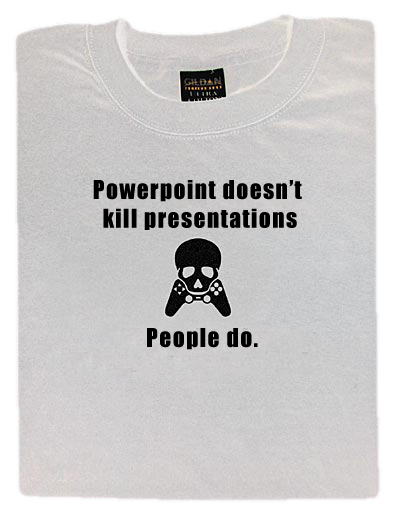 Bent Meier Sørensen, a Professor in the Department of Management, Politics and Philosophy, Copenhagen University wrote an impressive article in The Independent last week about using PowerPoint (and social media) in teaching. It was impressive in that it could have been a killer parody of techno-phobia and -determinism, written by someone who actually knows what they’re talking about when it comes to digital technologies for teaching. Sadly, it was written in earnest.

Sørensen wants to ban PowerPoint because one of his lectures was really dull. This is a bad workman blaming his tools. He goes on to say that:

PowerPoint locks the lecture into a course that disregards any input other than the lecturer’s own idea of the lecture conceived the day before.

But being ‘locked in’ represents his pedagogical choices, the PowerPoint is simply mediating his approach to the lecture. As he says at the end of his article:

Without the temptation of PowerPoint, lecturers have nothing but the students to fall back on. That seems a much more promising turn of events.

Indeed. So why not use PowerPoint to do just that – have your cake and eat it?

For example, you can add polling to PowerPoint, (Participoll for example is an add-in to PowerPoint. Other online polling and student participation platforms are available – such as Socrative or PollEverywhere). This allows you to get input from students at certain points, to check understanding, or to get opinions, and you could then use PowerPoint’s branching features to move to different slide, changing the focus of your lecture depending on what the responses are. PowerPoint isn’t locking the lecture into a particular path, what’s doing that is the author’s ignorance of the features of PowerPoint, and his approach to his lectures. Perhaps a course in advanced PowerPoint would be useful for him (if you’re at Leicester University, you can find training resources here).

The second, and related, mistake is to assume that technology has some inherent essential properties. It doesn’t. Claiming that ‘PowerPoint produces stupidity’, could be read as an ironic take on the author’s opinions, I suppose. But the mistake here is the technodeterminist belief that it’s the technology that makes people stupid. Technology in itself neither improves nor worsens the student experience or academic performance. At the risk of labouring the point, it is the practices and pedagogical choices of teachers which does that.

He also has a swipe at other presentation technologies like Prezi, suggesting that all it does is make the slides move around in a different way. Prezi can be used in a nonlinear way, which would solve one of the author’s complaints about PowerPoint. When preparing to teach there will be tendency to map the topic to PowerPoint, so you think about the subject matter as a linear chronological progression: beginning/middle/end; bullet-point, bullet-point, bullet-point; slide 1, slide 2, slide 3 etc. This may be appropriate for some topics, but Prezi allows you to place items on an open, virtually 3D canvas, and to create whichever paths you want between items, moving up and down or across the screen or ‘in and out’ into the screen. So you can think about your subject matter differently, perhaps tell the story in a different way, to emphasise different aspects, bring some forward, push some back, and so on. If you are thinking about your subject differently, that can lead to new insights into it. And as was mentioned above, PowerPoint doesn’t have to be linear – it has branching and hyperlinking features.

Even the students get blamed:

Yet the students perceive my bullet points as authoritative, and they would often quote them in their assignments instead of going through the toll of finding the meaningful points in the real texts from the course.

Perhaps he could try asking the students about the bullet points, have a discussion, get some feedback using response software or even Twitter by using a hashtag related to the lecture. Rather than

successfully banning Facebook and other social media in our masters programme in philosophy and business.

Again, PowerPoint allows you to embed video and audio, links to outside sources, and of course images (and that phrase ‘we do allow…’ says quite a lot, doesn’t it?).

The author’s solution to the issue of PowerPoint is…..use a blackboard. And fill it with bullet points perhaps? The reason for using this technology (because a technology is what it is):

You can also do this in powerPoint! There is also the question of accessibility with a blackboard. One thing that digital technologies do well is provide ways to enable people with accessibility issues to take part.

Glynis Cousin (2005) has pointed out that ‘all pedagogies necessarily involve technologies of communication’ and the two are inextricably linked. Paraphrasing Marshall McLuhan she says ‘the medium is the pedagogy’. You can’t blame PowerPoint for the tyranny of the bullet point, nor the pedagogic strategy of breaking a topic down into bullet points. The two are ‘jointly culpable’. Using a blackboard instead of digital presentation software won’t change this. Cousin’s point is that learning technologies do not sit separately from social practice (pedagogy), they are a part of the educational ecology, part of the context.

Technology has no intrinsic qualities, it doesn’t make you stupid or clever. It can be used inappropriately and in ways that are dull or confusing. It can also, when used appropriately and well, provide a way to improve the experience of students, and to play a role as part of the wider teaching and learning context, in improving academic performance and teaching practice. So, don’t blame your digital tools, look at your teaching approaches and think about how digital technology could be used appropriately and innovatively. You could start by looking at this: Teaching Approaches and Technologies to Support Them (requires University of Leicester log in). You can also contact the Leicester Learning Institute for advice on a range of teaching and learning issues.