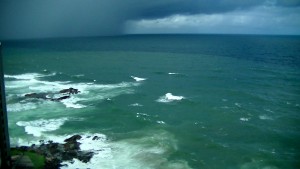 The storm comes from the sea. It’s like a curtain of fog. The Pestana is the first to go. Then, 5 minutes later, the Ondina Apart is covered. That’s when the rooftops go insane. Five kids carry on playing basketball in a communal field, blinking aquatically. Three others stand on a bus stop bench, looking at their flip-flops. The cars and buses send the water flying, and turn into skates. Then the rain stops and everyone comes out of corners and onto sidewalks, in their shorts, drying in 2 seconds. They have 6 minutes to reach their destinations, before the rain walks the sea again. It’s been like this for the past 2 months.

What affects my body here is definitely liquid. No window is watertight, not even in the hotel. The wind keeps me company, raging against the air conditioning. Coming warm into my writing. Writing is slow. Disrupted by the lack of electricity in the morning, enabled by strangers who smile.

But not all barriers are thin. The architectonic mix of condos and slums that pervades the landscape might suggest otherwise, but Salvador is a segregated city. It’s the opposite of its food, which Manuel Querino defines in A Arte Culinária da Bahia as being influenced by Portuguese, Amerindian and African cuisines. You are not what you eat around here. There’s something wrong with that t-shirt slogan.