The Story of Pulque, Part 1

Posted by Deborah Toner in Consuming Authenticities on March 10, 2015

In the 17th century, the Mexican historian Fernando de Alva Ixtlilxochitl recorded a pre-Columbian legend about the origins of pulque. According to Ixtlilxochitl’s version, a noble maiden named Xochitl presented the 8th Toltec king – Tecpancaltzin – with a gift of pulque, a fermented alcoholic drink with a foamy, milky-white appearance. Xochitl’s father had learned to produce the drink from the sap of the maguey plants that he cultivated and brought evidence of this discovery to the king. 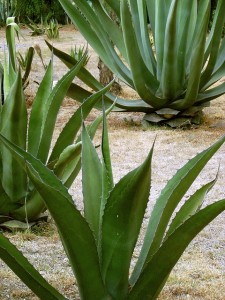 Young maguey plants, used in the production of pulque.

The king was so taken with both the gift of pulque and the beauty of Xochitl, that he took the young maiden as his queen without her parents’ knowledge. After 3 years, Papantzin managed to track down his daughter, who had borne the king a son by this stage, and challenged Tecpancaltzin about his wrongdoing. The king accepted Papantzin’s complaint and reassured him that Topiltzin, Xochitl’s son, would inherit the Toltec throne.[1]

In this story, a mythohistorical legend important to the way that different pre-Columbian Mexican groups understood their own history, the origins of pulque are tied to the foundation of a political dynasty. The imperial dynasties of the Aztec empire, in turn, partly based their claims to rule Central Mexico on claims of descent from the Toltecs, and pulque occupied an important ritual place in their calendar of festivals and ceremonies. 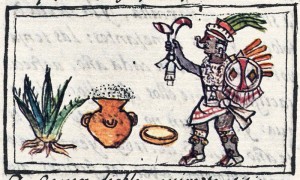 Page from the Florentine Codex Book 1 (a 16th century text co-produced by Spanish friar Bernardino de Sahagún and numerous indigenous writers), showing one of the Aztec divinities associated with pulque, a maguey plant, and a foaming jar of pulque. Image from the excellent, informative Mexicolore website.

Even as pulque became subject to widespread concerns amongst Spanish missionaries and government figures during the colonial period, and was even prohibited for a short time, Mexico’s most important historians were documenting its long-standing role in indigenous culture. And in the nineteenth century, after Mexico became independent from Spain, artists and writers drew on the story of pulque’s origins to explore Mexico’s cultural heritage.

Over the next few weeks, I’ll be posting a series of short explorations of these different stages in pulque’s story. What is immediately striking is the diversity of purposes to which historical narratives about pulque’s origins have been put over the centuries. I’ll be thinking primarily about the meaning of the originary aspect of these historical narrative and its relationship to claims of political and cultural authenticity.

Posted in History of Alcohol, Time and Temporality | 4 Responses

4 responses to “The Story of Pulque, Part 1”