Posted by Ana Martins in Consuming Authenticities on June 24, 2015

A couple of days before flying to Salvador on a research trip, I received a call from my brother. He was in Almada, a city located in the southern margin of the river Tagus, near Lisbon. He had found a bahiana do acarajé named Carolina Brito selling in a park, and wanted to tell me about her – he knows I’m researching discourses of authenticity around this street snack. He bought an acarajé and had a chat with her. Carolina told him she’s from the Itapuã neighborhood, near the airport in Salvador, Bahia. She is going to participate in a TV programme (Portuguese TVI channel) to talk about acarajé, the same day I’m travelling to Salvador. My brother sent me this photo of her, which I’m publishing here with her permission. 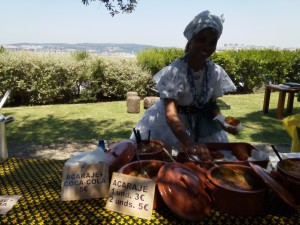 This setting is actually a variation of what I’m about to find in the more traditional bancas of Salvador. According to Gloria Lanci, a collaborator in our project, the bahiana makes the acarajé dough at home, but she does not actually serve the client in the street. She sits, fully dressed in her traditional, sparkling white clothes and headgear, mixing the dough, “fazendo social.” Her helpers are the ones engaging with the clients. Whilst the bahiana do acarajé has to be a well-dressed black matron – she is the food’s main staple of authenticity – the helpers can be either women or men. So, while the bahiana mixes the dough, someone else fries it, another person takes care of the fillings, and another deals with the payment. Often, we find three or four people involved in the process.