Posted by Barbara Cooke in Waugh and Words on November 20, 2015

This is a grotesquely comic story with numerous characters and a great deal of action. The sense of exhilaration keeps going to the end. Waugh’s skill lies in defining the characters so that they are not confused; the many contortions of the plot were easily understood. This demonstrates great craft in the construction of the book. Many in the group suggested that this is a book of its time. Geoffrey Lewis disagrees, finding it extremely diverting. 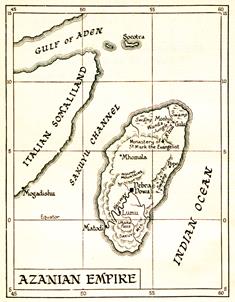 The action takes place on an island off the coast of Italian Somaliland in the early years of the 20th century. The map shows an outline of the island which resembles Madagascar but its exact dimensions aren’t disclosed. The native people were the Sakuyu, herdsmen described as being black, naked and cannibalistic. In the north of the island there were farmers called the Wanda who came from the mainland in the distant past. Arab traders had settled along the coast nearest the mainland of Africa and concentrated in the only port, Matodi, which lies on the Equator in the Southwest of the island.

The story opens after the succession of Seth as emperor of Azania. A civil war is raging and Seth is besieged in Matodi. His allies under General Connolly appear to be losing, and most of the Seth’s civil servants have deserted their posts. However, Seth is ultimately successful. He is a newly graduated Oxford BA and wants to embark on a policy of civilisation to replace what he sees as the current barbarism. He has ordered books for his work of modernisation and has recruited a contemporary of his at Oxford, Basil Seal to assist him.

Seal is a ne’er-do-well who, after throwing several wild and destructive parties in London and borrowing money he can’t possibly repay, is relieved to escape to Azania to assist his college friend. We will meet him again in Put Out More Flags and the short story Basil Seal Rides Again. Seth establishes a Ministry of Modernisation with the responsibility of driving through his new policies and places Basil at its head. Basil’s second–in-command is a wily Armenian entrepreneur called Krikor Youkoumian who is the book’s funniest character. He is a corrupt opportunist business man. Seth creates the victorious general, Connolly, a duke but feels embarrassed that Connolly addresses his black wife affectionately as “Black Bitch” and hopes that she will become known as “the Duchess” in time. 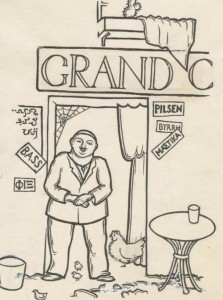 The story romps on to chat the rise and fall of both Seth and Basil Seal, with both tragic and farcical results.

On its publication Black Mischief caused great controversy, but while now the most difficult barrier for a modern reader is its frequent use of racist language and reliance on outdated stereotypes, in the 1930s it was the book’s “indecency” which ruffled the most feathers. The editor of The Tablet, a much-respected British Catholic newspaper, embarked upon a moral crusade against the novel that missed all of its satire and deeply upset the newly converted Waugh. If the book’s supporters, thundered Ernest Oldmeadow, couldn’t find anything wrong with ‘Good Friday Luncheon’ then there was no hope for them. Quite obviously, Waugh did see the problem with ‘Good Friday Luncheon’ (Catholic tradition demands a fast on this day). It was meant to be a joke, commenting on the imperfect adoption of Catholicism in the native church and fitting in with the book’s wider theme of misinterpreted colonial values – many of them imported by Seth himself.

For example, a poster is produced to demonstrate the consequences of lack of contraception by illustrating hardship with an exhausted wife and many underfed children. In contrast, another image shows a contented man, a happy relaxed wife and comfortable accommodation. However the population prefer the former poster which they interpret as being of a hardworking wife surrounded by the security of many children.

It is worth looking past the elements of Black Mischief that give cause to wince. It is actually very funny and incisive, and many of its comments on Western domination and power politics show Azanians in a better light than their leaders who, whilst claiming to stand for modernity and ‘civilisation’, stand for very little except their own limitations.