Alexander Waugh at the Leicester Literary and Philosophical Society

Posted by Rebecca Moore in Waugh and Words on October 29, 2015

On Monday 19th October Alexander Waugh, Evelyn’s grandson, gave a lecture on Combe Florey House (Evelyn’s last home) to the Leicester Literary and Philosophical Society. Alexander told us about Evelyn’s constant desire to change and improve his houses – as seen in the many alterations he made to Piers Court (where he lived from 1937-1956).  Selina Hastings notes that when Evelyn and Laura (his second wife) moved into Piers Court it was ‘in a poor state of repair and almost completely unmodernised’ (Selina Hastings, Evelyn Waugh: A Biography, p. 360). It was soon set upon, though Laura found she had to oversee much of the initial work on the house while Evelyn was away in Chagford. 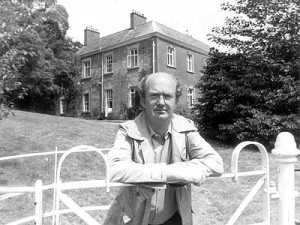 Auberon Waugh stands in front of Combe Florey House. Photograph from The Telegraph.

Interestingly the same impulse can also be seen in Waugh’s writing. The beginning of his semi-autobiographical novel, The Ordeal of Gilbert Pinfold (1957) contains the following lines:

He had no wish to obliterate everything he had written, but he would dearly have liked to revise it, envying painters, who are allowed to return to the same theme time and time again, clarifying and enriching until they have done all they can with it.

Thus houses seem to hold great potential for Waugh, because they represent the opportunity to revise and develop in a way that is much more difficult in print. It didn’t stop him from trying of course, and it is possible to see an example of this in A Handful of Dust (1934) where Waugh includes the chapter ‘The Man Who Liked Dickens’, a previously published short story, which he adapted to fit the narrative of the novel.

Gilbert Pinfold, incidentally, was written partly at Combe Florey and partly at Piers Court – the titular main character named after the previous owners of Piers Court, the Pynffold family. Alexander suggested that this link was Evelyn’s way of continuing the connection he had to that house, a literary version of ‘making his mark’ in the same way that he added the Waugh coat of arms to the empty space on the facade of Piers Court. So important was this ‘making a mark’ to Evelyn, Alexander told us, that one of the reasons he moved from Piers Court in the first place was due to him running out of things to change!

Many thanks to Alexander Waugh for a fantastic talk, of which there was much more than I have been able to write about here, and thanks also to the Leicester Literary and Philosophical Society for hosting.