Posted by Barbara Cooke in Waugh and Words on September 1, 2014

A sigh of relief was breathed by the Evelyn Waugh Book Group last Saturday when the cooling weather, at last, declared itself in sympathy with our tea and cake habit. Many Bakewell slices were consumed while we digested the contents of Evelyn Waugh’s later short stories. 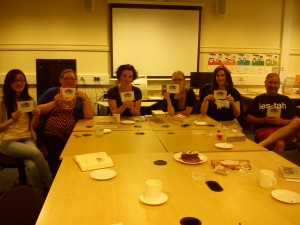 What counts as a “late” short story? For once, the answer is pretty clear-cut. The first piece in this collection is entitled ‘Work Suspended’, and marks a self-declared watershed in Waugh’s work. The first version of ‘Work Suspended’ was published in 1942, and documents a first-person narrrator’s growing love for Lucy, the pregnant wife of an old friend. The story was intended to be a novel, but Waugh abandoned it after a few chapters. He added an explanatory postscript to a 1948 edition of the work:

The date of [Lucy’s] child’s birth was August 25th, 1939, and while Lucy was still in bed the air-raid sirens sounded the first false alarmof the Second World War. And so an epoch, my epoch, came to an end … Our story, like my novel, remained unfinished – a heap of neglected foolscap at the back of a drawer.

Our feelings about this story, written with dry humour and conveying a depth of character remarkable given its brevity, were shared by Waugh’s contemporaries. Edith Sitwell, for example, told Waugh that while she understood why it was impossible for him to carry on with the work, she deeply resented that something so ‘curiously beautiful’ could not be developed further. 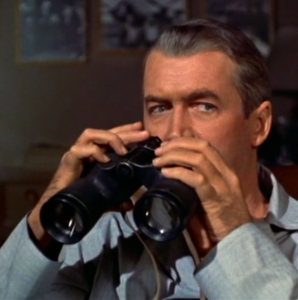 Another favourite was ‘Tactical Exercise’, a dark post-war offering in which a man plots to murder his wife. This is the second time we’ve come across a disturbingly lucid description by Waugh of someone falling out of love – but while Brideshead Revisted’s Charles Ryder speaks with coldness and disillusion, ‘Tactical Exercise”s protagonist experiences an explosion of hatred:

John Verney’s eyelids drooped wearily, a tiny grenade of hate exploded and the fragments rang and ricocheted round the steel walls of his mind.

The recent war is everywhere here, and the claustrophobic atmosphere of this story put some of us in mind of a Hitchcock thriller, and we all appreciated the (perhaps especially English) pathos of a couple who had grown to hate each other yet remained polite and even called each other “darling”. 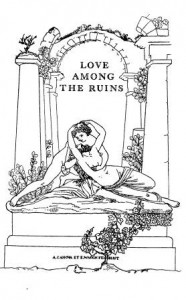 Like the early short stories, this later collection also included one incongruous work of science fiction. ‘Love Among the Ruins’ is styled as a ‘romance of the near future’ in which widely practised sterilisation of women can cause them to grow beards and healthy adults despair of life to the point that they queue up outside the municipal euthanasia clinics.

We remarked that it was unusual to come across a dystopia as imagined by a conservative author; while George Orwell and Ray Bradbury prophesy fascistic state control, Waugh depicts the Ministers of Welfare and Rest & Culture presiding over a world in which criminals enjoy the state’s best accommodation in the name of rehabilitation (an echo, here, of the sinister “progressive” prison governer in Decline and Fall). ‘Scott-King’s Modern Europe’, set in a fictional communist Latin state, is also overtly political but both funnier and – perhaps – closer to the bone.

Literary chat dispensed with, our thoughts turned to Party Like it’s 1929, and group members bagsied their favourite passages to read out at our upcoming evening celebrating all things Waugh. So if you’d like to hear Harriet reading out musings on the nature of love from ‘Work Suspended’ or Elizabeth-Anne reliving Agatha Runcible’s high-society gaffe in Vile Bodies – or if you just fancy spipping an authentic twenties cocktail whilst wearing a flapper dress – then reserve your free place at our Everybody’s Reading event now. Otherwise, see you in September for The Loved One.