On Saturday the 17th, taking refuge from the glorious May sunshine, the Evelyn Waugh Book Group met at Leicester Central Library to discuss Vile Bodies, Waugh’s second novel, published in 1930, and significantly, the last novel he wrote before his conversion to Catholicism. Part way through writing Vile Bodies, Waugh’s first wife, Evelyn Gardner, left him for John Heygate, and this ‘sharp disturbance’ had a noticeable effect on the tone of the novel. Waugh notes in his preface to the 1965 edition that it ‘was finished in a very different mood from that in which it was begun. The reader may, perhaps, notice the transition from gaiety to bitterness’. Despite its unhappy ending (something which Stephen Fry alters in his adaptation of the novel in his 2003 film Bright Young Things), Vile Bodies is regarded as one of Waugh’s best novels, but a letter sent to Henry Yorke in December 1930 betrays his apprehension of its reception, writing that he was ‘dreading [Yorke’s] verdict very much because now when anyone says they liked Decline and Fall I think oh how bored they will be by Vile Bodies.’ In another letter to his agent, A.D. Peters, Waugh asks ‘If Harpers Bazaar won’t publish Vile Bodies I’m afraid no one will, will they?’ 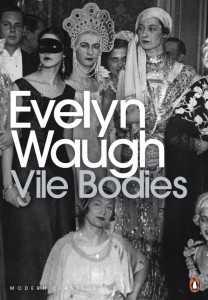 The group were certainly not bored by Vile Bodies, and it garnered a much more positive response than last month’s choice, The Ordeal of Gilbert Pinfold. Indeed, the overarching impression of the novel was its humour. The scene where Agatha Runcible unwittingly finds herself at No. 10 Downing Street the morning after an outrageous party thrown by the ‘Bright Young People’ was highly praised for its dialogue and pacing – though it was noted that the introduction of the Prime Minister earlier in the novel seemed constructed solely for the moment Agatha walks in on him and exclaims, like a true Bright Young Person, “Oh, how shy-making”. The group also felt that Father Rothschild might also be another of these sorts of characters that Waugh introduces but who do not make a significant impact on the plot. Yet Rothschild gives a poignant speech on the morality of the younger generation who think ‘If a thing’s not worth doing well, it’s not worth doing at all’ and is of the opinion that they might have the ‘right end of the stick’ in approaching life in this manner. He generally seems sympathetic to their difficulties as a wayward generation with little sense of direction in the confused interwar years. Thus the Bright Young People cannot be blamed for their disinterest in permanence because they are a product of an unstable society suffering from the ‘missing generation’ of father figures caused by the First World War. 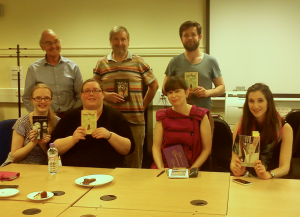 There was some discussion as to Waugh’s repeated use of seemingly ‘throwaway’ characters, particularly those with amusing names (of which there are many in Vile Bodies). It was mentioned that Dickens was also fond of this technique – matching names to personality traits – but this may be one of the few links to the Realist form in Vile Bodies. Waugh uses the technique satirically and not as social commentary.

The group also enjoyed Adam’s brief stint as Mr Chatterbox. Chapter seven begins ‘Then Adam became Mr Chatterbox’, a line with an air of detachment and offhandedness which sums up Waugh’s approach as narrator in Vile Bodies. This line is mirrored at the end of chapter nine: ‘So Miles Malpractice became Mr Chatterbox’, the punchline to the extended joke of the intervening two chapters about the absurdity of fictional gossip, and to some extent a comment on the disposability of characters in the novel (“does Adam really matter” was a question which came up a few times in our discussion). Adam, in the guise of Mr Chatterbox, invents various characters to write about in order to avoid the libel cases of his predecessor. These include an artist named Provna who constructed most of his work in ‘cork, vulcanite and steel’. The Metropolitan Museum of Art attempts to purchase Provna’s work but finds it cannot ‘out-bid the collectors’, whilst Mrs Hoop maintains the artist is busy sculpting a bust of her son which she intends to ‘present to the nation’ upon completion. It was mentioned that this amusing episode has its roots in a real life practical joke concocted in 1929 by Brian Howard and Bryan Guinness. The ‘Bruno Hat’ hoax involved an exhibition of various pieces of modern art ostensibly produced by an unknown German artist named Bruno Hat. Waugh wrote in the exhibition’s catalogue that Hat was ‘the first English abstract painter’ and it seems the event caused much amusement amongst the Bright Young People – especially when the newspapers reported the hoax as a serious attempt to fool the art world, rather than a few evenings of entertainment at the expense of the establishment. D. J. Taylor’s excellent book Bright Young People goes into some detail about this event and is definitely worth reading to see more of the heady yet ultimately doomed generation Waugh fictionalises so wonderfully in Vile Bodies.

There were more serious aspects to our discussion of Vile Bodies. As previously mentioned, the tragedy of the First World War and the inevitability of the Second are inescapable in the novel and the group wondered whether all the partying of the Bright Young People was in fact “painfully jolly”, that they were enjoying life in a fatalistic way before ‘like a circling typhoon, the sounds of battle began to return’. As such Vile Bodies is a peculiar novel in many respects – it certainly ranks amongst Waugh’s funniest and at times farcical works, but the echoes of war throughout and the ultimate tragedy of its characters give it a pathos that is not immediately apparent at the beginning of the novel. They might be ‘vile bodies’ but they are vulnerable too.