Jacopo Benci gives a talk at the Barbican exhibition – Constructing Worlds: Photography and Architecture in the Modern Age

Posted by Oliver Brett in Viewing and writing landscape: Luigi Ghirri and his legacy blog on January 31, 2015 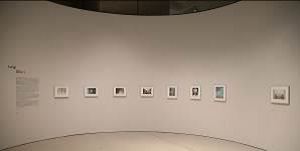 I gave a ‘gallery talk’ on Ghirri’s photographs of three projects by Aldo Rossi: the San Cataldo cemetery in Modena (1971–ongoing), the Elementary School in Fagnano Olona (1972–76) and the Secondary School in Broni (1979–81). It was a talk given to a group of 20 people, standing in front of the works, in the exhibition space.

I started by giving some context on who Rossi and Ghirri were, what backgrounds they came from. This was because I am aware that very few people in Britain – apart of course from those studying, or interested in, 20th century Italy – have a clear idea of the social, cultural, and political context of Italian arts.

In particular, I explained that Aldo Rossi (1931-97) was a student at the Milan Polytechnic from 1949 to 1959 and that in 1955 he was invited to join the editorial desk of Casabella Continuità by its editor in chief, architect Ernesto Nathan Rogers (one of the principal partners of the Italian modernist practice BBPR). Rogers’s reappraisal of tradition in the 1950s contributed to the shaping of Rossi’s particular vision, though this was mainly linked to his study of utopian eighteenth-century architect Etienne-Louis Boullée and early modernist architect Adolf Loos (other authors he saw as seminal were Raymond Roussel, Max Ernst, Georges Bataille).

To introduce Ghirri, I gave an overview of his training as a land surveyor rather than as a photographer or fine artist, and how as a practitioner and intellectual he was largely self-taught, though his encounters with the ‘Modena conceptualists’, and later with intellectuals such as Arturo Carlo Quintavalle, Cesare De Seta, and Vittorio Savi, certainly helped him in his intellectual and artistic progress. Then I discussed the photographs on exhibit while referring to Ghirri’s and Rossi’s writings, especially Rossi’s Note autobiografiche sulla formazione (1971), and Architetture padane, a joint project with Ghirri (Casa del Mantegna, Mantova, 1984), and statements by Ghirri on the San Cataldo cemetery project, in particular, and on Aldo Rossi, from 1985, 1987, 1990.

As Ghirri recalled in 1985, the offer to photograph Aldo Rossi’s Modena cemetery in 1983 ‘came from the magazine Lotus, but it was [Vittorio] Savi, who had written an essay on some of my series of photographs, to insist that the task was entrusted to me. I must say that the shift from anonymous architecture to cultured architecture was not difficult. My gaze was that of a participant observer.’ According to Ghirri, architectural photography as it had been practiced up to then was:

a process that begins with the project design, passes through stages that we know well, and is resolved in the artefact. The artefact is then authenticated by photography. This path produces the stereotype of ‘architectural photography’, which I think is now really worn out. More than authenticating the ‘vision’ of the architect, my gaze and my approach would like to reveal hidden aspects and functions, and return an image of the lived experience of architecture.

For Ghirri, instead, architecture:

lives, it lives of subtle and fascinating spatial and temporal changes, even in the weather. […] I am interested in working in sequences related to each minimal variation that makes architecture alive. So for example, I photograph at different times of day, to show how light can change and transform; to make comparisons between how architecture appears in the morning light, in the twilight, or in the dark of the night; or to verify how it is lived.

In 1987, he described how he had approached Rossi’s edifices at San Cataldo:

Living in Modena and happening to see the cemetery quite often, I always enjoyed the way the blue roof of the part already built became merged with the blue of the sky, observing how the colours changed according to the time of day. I was also taken with the red cube at the centre, which appeared, framed in my car’s side windows, as I drove down the road towards the Po. The process of taking the photographs was extremely interesting, not so much because of the results eventually obtained, but because, strangely, in the perfect solitude of the public holidays when I could not disturb ongoing work or be hampered by it, it seemed that the secret of an approach to architecture and to the means of representing it photographically revealed itself to me. Paradoxically, the further my work proceeded, […] I found myself with more work to do. There were always new angles to observe and frame, new points of view for each little movement in space. Scarcely were perspectives photographed when they reappeared minutes later in a new way; the light constantly changed the sense and appearance of the volumes and surfaces, colouring them differently. The little windows of the low wing produced framings analogous to those of the camera’s viewfinder. In their repeated square frames a succession of different things appeared, like an ever changing theatrical set […]. The rise to the ossuary confirmed this impression of mobility and flux. Immediately after climbing the first flight of stairs, where the exterior could be seen through cubical windows, I arrived at a point where two windows appeared simultaneously, one on the first and one on the second floor, with the green of a field visible through one, and the blue sky through the other. These two surfaces seemed to embody in a visible form, both organic and synthetic, the meaning of all this architecture, suggesting the idea of a balance between the internal and external.

And, reflecting on Rossi’s architecture as a whole, Ghirri added:

every time I have encountered Aldo Rossi’s work, whether as photographer or simply as observer, […] these buildings – whether stage set, cemetery, house, or school – amazed me […] because they were at once immediately familiar and yet mysterious: an extraordinary fusion of the rediscovered and the never before seen, of the known and the unknown. Perhaps Rossi’s works achieve this miraculous balance between what we already know and expect of architecture, and the sense of bewilderment that is provoked by the new.

Finally, in a video interview taped in 1990, Ghirri added:

Beyond the architecture of Aldo Rossi, what struck me the most is his Scientific Autobiography [Cambridge, Mass.: MIT Press, 1981], which I consider one of the most beautiful literary texts of the postwar period. It is a clear demonstration, even poetic in a way, of how architecture, photography, cinema, literature, are born from a crossing of desires, dreams, memories, intuitions and inventions. They never take shape as a static, designed, rigid thing, as an architecture or a photograph can be; they rather interpenetrate and find their privileged space within the existence of the author.

An empathy undoubtedly developed between Ghirri and Rossi; as the latter wrote in his Scientific Autobiography, ‘each place is remembered to the extent that it becomes a place of affection’ – a statement that is very close to the way Ghirri related with landscape, urban and otherwise. In December 1995, Rossi wrote about the photographs of the San Cataldo cemetery:

Luigi Ghirri was from Modena and took photographs at different times of day; the great unfinished work […] affected him, too, because it belonged to the vast Po plain, the lower valley of the Po. The lower Po plain is scattered with abandoned farmhouses, and cemeteries, opera houses and dikes, which are like a great rampart against the force of the river. […] Luigi Ghirri knew all this, but he also had a sense for things that move across time; as in opera, a sustained ‘feeling’ both prefigures the climactic moments and keeps them alive – this is why he shunned the ‘beautiful’ photograph.