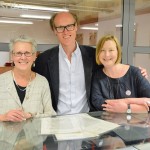 Posted by Julie Coleman in School of English Blog on June 26, 2014

The BBC’s chief Arts Editor Will Gompertz visited the University on 25 June to make a radio feature on the Leicester-born playwright Joe Orton. For his report on the 50th anniversary of Joe Orton’s first play Entertaining Mr Sloane, Will Gompertz came to see the exhibition ‘Joe Orton in 1964’ in the David Wilson Library. […]