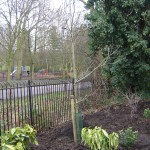 Posted by Julie Coleman in School of English Blog on January 27, 2014

Apology   I’ve used a lot of paper, I know that’s pretty bad, and when I think about it it makes me kind of sad.   I’ve pondered on the problem, I’ve thought about it hard and that used up realms of paper and stacks and stacks of card.   I’ve racked my brains and […]

Posted by Julie Coleman in School of English Blog on January 17, 2014

SPELL (Society for Postgraduate English Literature and Language) are literally breaking new ground this term by kicking off events with a tree planting. The society is donating £50 towards the planting of a red oak tree (quercus rubra) on the boundary between campus and Victoria Park. SPELL Secretary Suzi Shimwell who led the bid to […]

Posted in SPELL | Leave a response