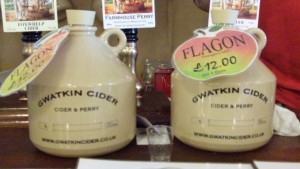 Non-commercial cider for sale at the Royal Welsh Spring Fair

What is interesting is that the term ‘commercial’ in that context doesn’t really apply simply to someone making money from the cider they produce. Many craft cider makers do make money from it, and certainly very few (if any) pursue it as a hobby where they make a loss-even if they don’t sell their cider, they still have lots of cider!

A cider-maker’s commercial success, in terms of winning awards for their cider, isn’t an indication of commercial-ness either. Though many reject the idea of commercial, they are certainly competitive. The annual Welsh Perry and Cider Society festival is really a cider contest. Even so, many cider makers have reported a reluctance to ‘go commercial’ after winning awards or gaining notoriety for their drink, and most simply refuse to sell in supermarkets in spite of how popular their cider has become.

It would seem then, that the term ‘commercial’ when applied to cider making refers to a lot of things, but is generally a shorthand way to say ‘not craft’. Being commercial is not about money and it is not about popularity or success. Even some of the largest scale craft cider makers in Wales aren’t really called ‘commercial’ by their peers, these are sometimes referred to as ‘the big boys’, and sometimes, ‘at the more commercial end’. What is really striking is that the point at which a cider maker becomes regarded as ‘commercial’ is when they start adopting techniques that do not fall into the broadest agreed characteristics of a craft cider, such as using 100% juice (and though there is less overall consensus on it, additive free).

Money, fame, awards and competition are not incompatible with craft cider, and so we must agree that ‘commercial’ means something very specific in teh world of Welsh craft cider.

3 responses to “What is ‘commercial’ cider?”