Authentic Recipes from Around the World

Posted by Deborah Toner in Consuming Authenticities on August 19, 2015

We have recently been checking the proofs of our recipe book, Authentic Recipes from Around the World, and are starting preparations for the book launch, which is happening on 23 October in Senate House, London. It is free and open to all, with complementary copies of the recipe book on offer, so please get in touch with Ana Martins (A.M.D.Martins@exeter.ac.uk‎) if you want to come along! We will have some story-telling and tasting sessions as well as an introduction to the recipe book, so it promises to be a very exciting afternoon! 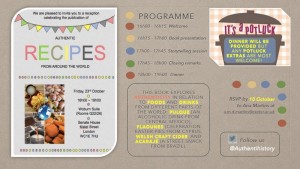 Writing the recipe book got me to thinking about one of the overall aims of our Consuming Authenticities project, to involve people with either professional or personal connections to the foods and drinks we’ve been examining in the research process. This was so the project could work to foster increased awareness about the complexity of cultural and historical relationships involved in the culinary sphere, bringing together people and perspectives from food cultures around the world and the UK, both from inside and outside academia.

We started thinking about the value of doing this, and how we would try to do it, since we first had the initial idea for the project, in part because the Arts and Humanities Research Council funding award that we were seeking was designed to encourage projects with a strong potential for research “impact”. This will be a familiar term to those of you within academia, but for anyone not familiar with academia and its funding systems, research impact is defined quite specifically: it means that your research as a scholar must demonstrably and measurably change the behaviour of (ie impact upon) people, organisations, policies, groups outside of academia, usually in a positive sense. Examples of impact given on the Economic and Social Research Council website are: “fostering global economic performance, and specifically the economic competitiveness of the United Kingdom,” “increasing the effectiveness of public services and policy,” and “enhancing quality of life, health and creative output.” [1]

Much has been said about the potential and actual problems of defining and measuring the often quite intangible effects and benefits of work in the arts and humanities (for instance, here, here, and here), and I’m not going to go over that ground now. The point I’d like to make is that, especially when it comes to measuring impact, the focus seems to be primarily on how the research has changed or impacted upon non-academic people, groups, organisations and so on. My co-investigator Anna Charalambidou summarised our impact in this sense so far in a previous post, and don’t get me wrong, I am totally chuffed with this!

But in the process of writing our recipe book, which drew on the interviews, exchanges and workshops we have had with producers, consumers and interested parties of pulque, acarajé, cider and flaounes, I was also struck by the “impact” that working with non-academic partners had on me, how I thought about the project’s aims and significance, and how I viewed my own contribution as an academic. The chapter on pulque changed from being a chapter primarily researched and written by me, with the input of several Mexican chefs and food writers, to a chapter co-written by myself and Rocio Carvajal, a food researcher, writer and owner of a microbakery in Puebla, Mexico, whose energy and commitment to the project has been fantastic. I also fundamentally changed my conception of what was important to include in the chapter following discussion with Rocio and another contributor, chef Edson Díaz-Fuentes, and having seen the plans for our chapter on Welsh cider, collaboratively put together by Emma-Jayne Abbots and Hazel Thomas, Elaine Forde and others in the People’s Collection Wales team. Not only has working with such non-academic partners had major and important impacts on the way the Consuming Authenticities project has developed, but it has also made me want to continue working in this area of food studies and in a very collaborative way in the future. Scholars are very much used to working on their own and under their own steam, and sometimes collaborating with others can be difficult. But the benefits of a collaborative spirit can be profound, both in terms of helping a particular research project to achieve more ambitious and wide-ranging goals than the expertise of a single person could manage and in terms of being a hugely enjoyable learning experience. Does that “count” as impact? It blooming well should!

One response to “Authentic Recipes from Around the World”