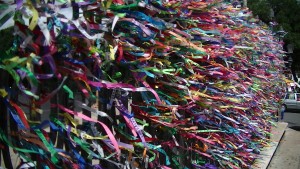 Here, people aren’t born, says Lázaro, my tourist guide. They come up on stage. They don’t die, they have a curtain call. The paulistas in the group find this comment very amusing. But Lázaro looks like he knows what he’s talking about. He’s a painter, and our driver is a ballet dancer.  We are inside a tinted window van, stuck in traffic, on our way to visit the Church of Our Lord of Bonfim, the most famous Catholic Church of Salvador, and one of the touristic hotspots in the city. He then turns to me: Portuguesinha, have you ever been to the Bonfim Church in Setúbal, Portugal? Well, get ready to see the upgraded version. The people of Bahia are in the habit of improving Portuguese originals. I ask for examples of Bahian improved versions and he immediately mentions codfish. I would need another year (on top of the proverbial Portuguese yearly menu of codfish) just to taste all the improved recipes involving cod, Bahian-style, he argues, taking off his sunglasses. I don’t dare to disagree.

My guide, who dreams of opening an Afro-Bahian restaurant in Salvador, is clearly well-read on the subject of Afro-Bahian cuisine. I found this patterned talk about improved versions of Portuguese originals in the work of canonical authors (i.e., Darwin Brandão and Guilherme Radel), who explain culinary fusions just like Lázaro explains the importation of religious venerations: from a hierarchical perspective, and by looking at connections that begin with the Portuguese. In this literature, food formation is explained alongside racial formation, Gilberto Freyre-style. In other words, the “authenticity” of Afro-Bahian cuisine is based on a (constructed) original that is far away, in another continent. But that continent isn’t simply Africa. It’s Europe first, then Africa.

Obviously, there is some truth in this. Africans didn’t just bring acarajés hidden in their pockets when they made the crossing. When Nago men and women from the Yoruba regions of Nigeria and the Benin Golf crossed the Atlantic to work as slaves in Brazil during the colonial period, they were forced to leave everything behind. Memories, stories, songs, religious beliefs, and oral knowledge was the only baggage they were allowed. This rich knowledge was put to practice in Brazil in the telling of stories, the praying to the Gods, the working of the fields, the breeding of cattle, and the preparation of meals. Some ingredients, used traditionally in Africa, such as okra and dendê oil, had already been introduced in Brazil by the Portuguese. When enslaved men and women began their unpaid labour as cooks in the Portuguese colonisers’ houses, they started mixing ingredients and recipes from Portuguese and African territories:

“And the result was a practice that mixed up Portuguese and African cuisines, but it was more African than Portuguese, because the cook was black.” (Darwin Brandão)

Brandão goes on to compare cooking with having sex, by noting that:

“In the beginning of colonisation, it was the Portuguese who cooked his own meal, in the manner of his homeland. Then the black cook was introduced in the house, and she started to serve the master in the kitchen and in bed.” (Darwin Brandão)

Eating is treated here as a necessary substance, but it is also compared with sexual consumption: consuming the other, Freyre’s main preoccupation in The Masters and the Slaves. Although references to food in Freyre’s work are only a side dish, so to speak, Brandão’s comment reveals that food, and the act of eating, is at the heart of the Freyrean mythical colonial relationship.

But food and eating practices are also at the heart of resistance to imperialism. The tacit acceptance of Freyre’s hierarchical triangulation of Portugal, Brazil and Africa in Brandão’s study effectively depoliticises cooking as one of the earliest forms of empowerment of black women and men in the face of colonisation and enslavement, as a practice that allowed them to challenge the dominant ideologies that attempted to control them.

At once, food liberates and oppresses.

One response to “Acarajé diaries. Day 6”