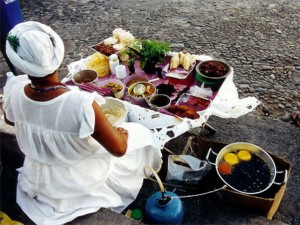 In October 1972, Brazilian foreign minister Gibson Barbosa went on a month-long trip to nine West African countries in order to develop closer economic and political relations with black Africa. In Ghana in particular, Gibson Barbosa had to endure hostile reactions to Brazil’s ties with Portugal, a country ruled at the time by a right-wing regime intent on remaining in Africa long after other European nations had left. After landing, the Brazilian delegation was led directly to a luncheon at a seaside hall, where Ghana’s foreign minister Aferi challenged Brazil’s construction of sameness as an “African” country. Here, the authenticity of Brazilian Africanness was tested by drawing on food: “I regret if you find [the food] disagreeable”, Aferi said, ‘but it is typical of what we eat, and we do not want to pretend to be who we are not’ (Dávila 2010: 157). Perceiving this as a test to his Africanness, Gibson Barbosa tasted the food and said: “I really don’t like it. (…) It really isn’t hot enough. In my country we eat this much spicier” (157). Putting on his sunglasses to hide his tears, Gibson Barboza went on to falsely embrace the highly spiced food by asking for some more spice. As he cleaned his tears, he said:

Jerry Dávila mentions this anecdote in his 2010 book titled, Hotel Trópico: Brazil and the Challenge of African Decolonisation, 1950-1980, in order to exemplify how culinary treats have played a central role in defining Brazil as part of Africa, and how the names of these dishes pointed directly to the connections between Brazil and Africa:

“The people of Bahia pride themselves in their acarajé [a shrimp and palm oil fritter], which is our form of saying jé akara, the good old Yoruba dish. And in my own province of Pernambuco … a Christmas table is not acceptable if it does not include a cake called pé de muleque, which means foot of negro. It is simply delicious” (Dávila 2010: 89).

Acarajé and other delicacies and meals aided Brazil to enact a cultural authenticity that would open up economic ties with black Africa, historically severed by means of Brazil’s “special” relationship with Portugal throughout the first half of the twentieth century.