Posted by Deborah Toner in Consuming Authenticities on January 24, 2015

For some reason I always expect January to be a relatively low intensity month in which some leisurely research and reading can be achieved, but it has never worked out that way. Aside from the usual flurry of marking of last semester’s final assignments and teaching preparation for the coming semester, two projects related to the Drinking Studies Network I run have been keeping me busy. And both have been keeping the issue of alcohol and authenticity at the forefront of my mind.

Our Drinking Studies Network was founded in 2010 while the founding members were all based at the University of Warwick. We are now a large multidisciplinary and cross sector research group with over 100 members.

First, with my co-editor Mark Hailwood, I’ve been dealing with the final copy-editing and proofs of an edited volume that grew out of this Drinking Studies Network’s last conference, “Biographies of Drink” back in 2013. One of the chapters directly confronted issues of authenticity – a chapter called “More Than Just A Shop That Sells Beer? J. D. Wetherspoon And The Pub Authenticity-Value Aesthetic” by independent scholars Christopher Rountree and Rupert Ackroyd, which I’ll write about more in a separate post. But authenticity actually emerged as an underlying theme throughout several chapters in the volume, whether it was about experiencing a sense of authenticity through connecting with past practices of alcohol consumption or production, experiencing a more authentic version of the self through alcoholic hedonism, or a particular alcoholic beverage or drinking place acting as a symbolic cypher for the “real” past, homeland or culture. 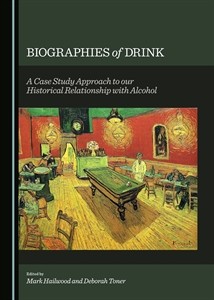 Biographies of Drink: A Case Study Approach to our Historical Relationship with Alcohol will be published with Cambridge Scholars Publishing in 2015

In the second project I’ve recently been occupied with, authenticity issues have very much come to the fore in their own right, rather than bubbling away under many other layers of research on alcohol. Emma-Jayne Abbots and I, as the alcohol-focused researchers within the Consuming Authenticities project team, decided to put together a panel proposal on our project for the forthcoming conference at the University of Leicester (6-7 June 2015), “New Directions in Drinking Studies” that I am also organising via the Network. In seeking a third panellist who might chime with our project’s interests from the Network’s members, I was then inundated with responses from scholars across the disciplines who had something to say about alcohol and authenticity. While some of those people have ultimately decided to submit other proposals to the conference CFP, I have been able to put together two full panel proposals (the sharp-eyed among you will recognise the titles of these panels!) The first panel is “Time, Place and the Past in the Construction of Authentic Alcoholic Drinks” in which Emma-Jayne and I aim to present our work on the project with a third panellist working on the role of collective memory, imaginary geographies and brand identities in the way that particular types of Russian beer are marketed. The second panel, “Consuming Authenticities: Performance, Taste and Identity in Experiences of Alcohol Consumption” includes proposals on the importance of authenticity for student non-drinkers, the balance between taste and faithfulness in the reconstruction of historical punch recipes, and the emerging phenomenon of “real ale” tourism in the UK.

This is really great news from my perspective, for a couple reasons. Firstly there is such a large body of research on food and authenticity that I have wondered at times if it would have been better to concentrate our Consuming Authenticities project wholly on food. But the high levels of interest amongst the Drinking Studies Network members in the relationship between alcohol and authenticity suggest that this is an emerging and growing area of interest, with unique angles – given alcohol’s intoxicating properties – that can better contextualise and enrich our understanding of how and why specific foods and drinks become embedded in discourses of authenticity while others don’t. Secondly, we’re aiming to form several research clusters within the Drinking Studies Network around particular research themes and this process has put “Alcohol and Authenticity” in the running as a strong contender for the theme of such a research cluster. A mutually supportive relationship with the Consuming Authenticities project is bound to develop!

2 responses to “Alcohol and Authenticity”