Posted by University of Leicester in Waugh and Words on May 29, 2017 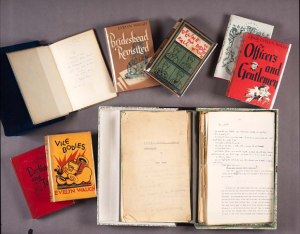 Books from the Evelyn Waugh Papers, with Waugh’s autograph manuscript of his travelogue Ninety-Two Days at bottom right. The Huntington Library, Art Collections, and Botanical Gardens.

Over 5-6 May 2017, the Huntington Library hosted a symposium entitled ‘Evelyn Waugh: Reader, Writer, Collector’. The gathering was made possible through the generous donations of Loren and Frances Rothschild, the Evelyn Waugh Society and the Arts and Humanities Research Council. We had come together to celebrate the Rothchilds’ donation of their own Evelyn Waugh collection to the Huntington (you can read the full rationale here, and the convenors’ Verso post about the conference here ). In the post below, veteran Waugh scholar Robert Murray Davis shares his idiosyncratic thoughts on a remarkable two days.

You can hear Waugh and the Profession, Bob’s reflection of his life in Waugh studies, along with all the talks from the symposium, on Soundcloud.

The symposium can’t be compared to previous Waugh gatherings in Oxford, Austin, Downside, or Leicester because the sponsorship and focus of each were quite different. This was the most luxurious (if you don’t count the dinners in Oxford and Austin hosted by Bill Wendt), with quarters at the Cal Tech Athenaeum and dining at the Athenaeum and at the Huntington. 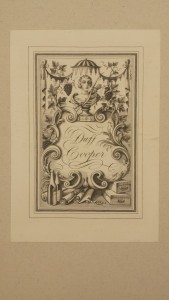 One sign of the efficiency of the service was the omelet I ordered on Friday morning, which not only arrived hot but stayed hot until I finished it. And at Rothenberg Hall at the Huntington, the paper towel dispenser was designed so well that single towels  could be picked up without dampening five others in the stack. This may seem minor– acting Huntington president Steve Hindle said that I was the only person who noticed the towels or for that matter the omelet–but it testifies to the care with which the institutions are designed and maintained.

Once problems with the sound system were overcome–sometimes by turning on the microphone switches–the papers were well received and the responses were varied, often lively, and sometimes carried on outside the sessions, even beyond the boundaries of the symposium.

What had earlier seemed a division between those who have studied Waugh for years and those brought in to work on the Complete Works of Evelyn Waugh because of their expertise in textual editing turned out in practice to be illusory or readily bridged.
Several people of ages ranging from the twenties to the eighties mentioned that they were discouraged from working on Waugh, and this led, indirectly, to brief discussions of how to counter this disparagement of Waugh’s importance as a writer and increasing the number of people studying Waugh and his work. No conclusions were reached.