Posted by Rebecca Moore in Waugh and Words on December 16, 2014

‘The most wonderful time of the year’ is quickly approaching. Over the next week or so many of us will skitter into the overheated realms of corporate Christmas in a slight panic, hoping to find the perfect present.

However, Evelyn Waugh was particularly dismayed in 1946 to find that hardly any of his friends or family had made the effort to buy him anything. ‘Laura gave me a pot of caviare which I ate a week ago. My mother gave me a copy of the Diary of a Nobody. But for these I have had no presents though I have given many. I should like to think that from 29th October [the day after Waugh’s birthday] onwards friends in all parts of the country were thinking “What can we give him for Christmas?” and hunting shops and embroidering and continuing to find me unique and delectable presents. But it is not so.’

This is all rather sad and we might even feel quite sorry for Waugh, having gone to the trouble some days earlier of signing sixteen copies of his travel anthology When the Going was Good to give as Christmas presents. This generally curmudgeonly attitude to Christmas was developed very early on in Waugh’s life, he wrote the following at the age of 16: ‘Like birthdays, Christmas gets duller and duller. Soon it will merely be a day when the shops are most inconveniently shut’. And it continued to the very end of his life, though it seems by 1960 Waugh had accepted that there was little point in complaining about it: ‘Christmas. All that remains of Bethlehem is the breakdown of communications; no room in the inn. We adopted the heathen festivals. We must not whine now that the heathen are taking them back again’. 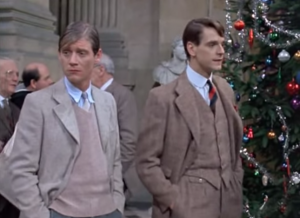 Christmas at Brideshead in the 1981 Granada TV adaptation.

Christmas also appears in a melancholic mood in Brideshead Revisited. Sebastian’s alcoholism has reached a critical level by Book Two and it transpires that he has been brought forcibly back from Constantinople to Brideshead Castle by Mr. Samgrass – though they still miss Christmas Day, arriving two days later. Charles arrives at the same time and shares the following exchange with Sebastian:

‘Yes I was determined to have a happy Christmas.’

‘I think so. I don’t remember it much, and that’s always a good sign, isn’t it?’

It is an offhand comment by Sebastian, but nonetheless expresses his deep dissatisfaction with the world he inhabits. His drunken escapades abroad may not have been the healthiest environment, but the stifling surroundings of his childhood home actually end up spurring him onto further destructive behaviour. Indeed, I think the scene in which Sebastian drunkenly reappears at the dinner table after absconding from the hunt is one of the saddest in Waugh’s novels:

‘A blow, expected, repeated, falling on a bruise, with no smart or shock of surprise, only a dull and sickening pain and the doubt whether another like it could be borne – that was how it felt, sitting opposite Sebastian at dinner that night, seeing his clouded eye and groping movements, hearing his thickened voice breaking in, ineptly, after long brutish silences’.

It is interesting to look through Waugh’s Christmas grumblings because they are so consistently melancholic – and having spent the last year trying to reconcile Waugh’s often contradictory statements about art and aesthetics it is rather refreshing, if also rather sad.